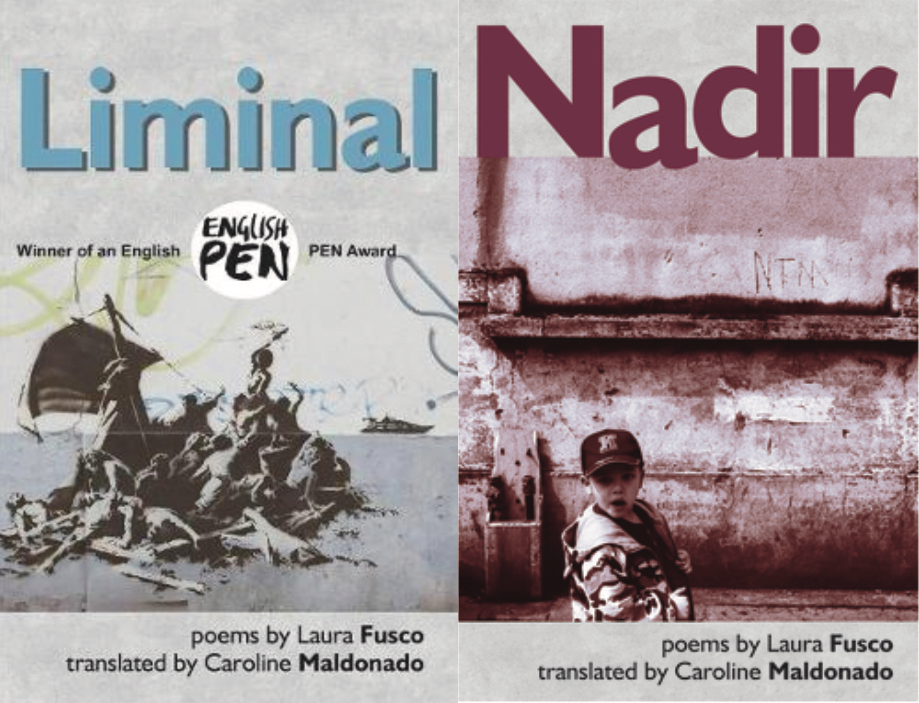 According to the UN Refugee Agency there are currently eighty-two million refugees traversing the globe*. Almost half of these refugees are children under the age of eighteen. Every year, two to three hundred thousand children are born to displaced families. Those fortunate enough to give birth in a camp will have access to baseline medical care and drinking water; however, for many this will be luxury beyond imagination. The life of a refugee is one of deprivation, uncertainty, alienation and political derision.

Faced with this unimaginable level of suffering, artistic depictions of the refugee crisis can often be problematic: stories can be appropriated, experiences truncated, voices neutered. How then do we attempt to represent the most significant humanitarian crisis of our times without losing sight of the agency of the individuals and communities at the centre of this tragedy? With the publication of Liminal and Nadir Laura Fusco has perhaps found a way. In these two tremendous volumes of poetry, Fusco, an Italian poet, activist and theatre director sensitively attempts to provide a space for the voices of these marginalised, ‘liminal’ individuals as they are forced to flee their home countries due to war, abuses of rights, and climate change, and navigate often perilous journeys across borders in search of personal and political sanctuary.

In Liminal, Fusco centres on the experiences of refugees, especially women, trying to survive in refugee camps and temporary accommodation across France. The poems in this first collection, quarried from the conversations and relationships Fusco struck up with individuals during her visits, are unsentimental and immediate in their imagery and depictions of the refugee experience. Fusco is a compassionate yet honest observer, never shying away from showing complex human behaviours. People steal, lie, and cheat, but they also show tremendous patience and love for one another in incredibly difficult situations. A real strength is that the poems not only contain a record of these refugees’ experiences, conversations, anxieties, hopes and pleasures, but also of the environment of the camps themselves: their signs, smells, sounds, graffiti and placards. Fusco never lets us forget that the camps are sites of memory where transient communities attempt to record their own history through songs, storytelling and the written word. The mix of spoken and written registers running through the collection lends a documentary, cinematic feel to the work and is often disarmingly affecting:

In Nadir, her latest collection, Fusco turns her attention to the plight of refugee children. In his foreword poem the French playwright Philippe Claudel warns us, ‘Laura Fusco’s poetry is not likeable / It is not pretty / It is not gentle’, and one is bound to agree. It is easy to see the titular ‘Nadir’ as the point Western society has reached in its treatment of the most vulnerable casualties of the global refugee crisis. As in her earlier work, in poems such as ‘Night’ and ‘Photo 1’ Fusco uses biographical details to tell an unflinching story of children forced to grow up too fast, of lost innocence and fragile resilience. Where this collection diverges from, and indeed complements Liminal, is in Fusco’s additional focus on the labyrinthine networks of international laws and bureaucracies that often work to dehumanise and place in limbo those they profess to help. ‘Children’s Charter of Rights’ perfectly captures this paradox, demonstrating how the codification of a child’s inalienable human rights can lead, perversely, to those same rights being negotiated away by equivocating lawmakers and politicians. Fusco’s critique of the distant, obtrusive state can also be read as a condemnation of the ignorance and complacency of wider society, and indeed of our own. As Claudel rightly says, Nadir aims to confront us with ‘our silences, our broken promises, / our turned backs’.

It is not unsurprising that Caroline Maldonado received an English PEN award for her translation of Liminal, and her vital and energetic prose in Nadir deserves similar praise. Let us hope we see more from this talented partnership soon.

*This article was written before the war in Ukraine.

Joseph Dance is an archivist, writer and poet. He previously worked as Head Archivist at the Marx Memorial Library and Workers’ School and has a BA and MA from the University of Cambridge in English Literature. He is currently working on his first collection of poetry.