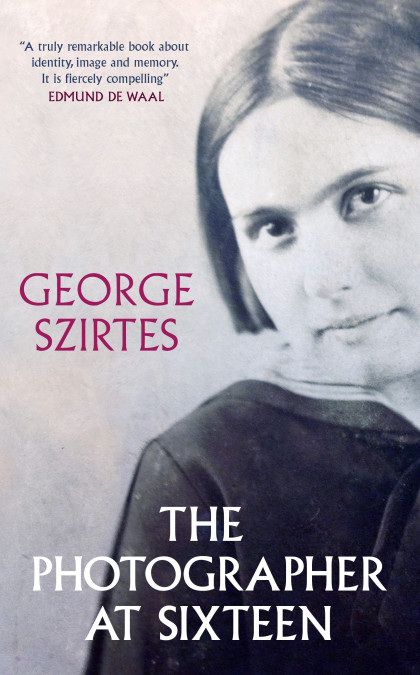 #RivetingReviews: John Munch reviews THE PHOTOGRAPHER AT SIXTEEN: THE DEATH AND LIFE OF A FIGHTER by George Szirtes

A teenage girl, eyes glinting, fixes the camera with a quizzical gaze. The young Magda Szirtes manages to combine youthful purity with a knowing air. And it is her alluring image – reproduced on the front of my review copy – and her embattled existence in times of both cataclysm and peace that form the emotional fulcrum on which this wrenching memoir rests.

Author George Szirtes emerges as a diligent and self-effacing chronicler. A prize-winning poet and respected translator into English of canonic Hungarian works, he deploys his literary skills to full effect as he traces the family’s odyssey from pre-war Budapest to ultimate refuge in suburban home counties of England.

Other modern accounts of Jewish family dispersal and fortitude such as New York Times columnist Roger Cohen’s The Girl from Human Street range over a wider and more detailed historical frame. This is not Szirtes’s prime focus. It is instead to report his mother’s presence and ‘register it as it moved through life by moving back into her past with her’. The task is akin to a researcher confronted by a palimpsest, seeking to uncover earlier drafts below the surface text.

It is not an easy undertaking. Apart from exuding perennial vivacity and moral courage, Magda’s inner being is seldom less than multi-layered. Born in Romania in 1924 to a Hungarian family she retains more enthusiasm in middle age for her birth country than for Hungary. Although Jewish, she is likely to have been an atheist, in common with her husband Laszlo, himself a ‘thorough, if non-militant, unbeliever’. According to George he and his brother Andrew ‘had never stepped inside a synagogue, never kept any Jewish holidays or customs; we were not even circumcised’.

Even to describe Magda as a photographer may be an overstatement. While there is no disputing that she trained at a photographic studio and indeed met her husband while employed there, it seems more reasonable to assume she worked as a laboratory technician. No evidence is brought forward of news photographs she might have taken. It’s a double irony given the meticulous care her son devotes to probing every image he can find about the family forebears for clues to their motives and behaviour.

A far sadder fate awaits Magda in England, following the Szirtes family’s precarious escape (with two youngsters in tow) from the anti-communist uprising in Hungary through the borderlands with Austria. The 1956 landing at Heathrow airport represents ‘point zero’ of their new life. By year two, having failed in their preferred objective of emigrating to Australia, the family post a marker of social solidity by buying a second-hand maroon Hillman Minx. ‘We were doing pretty well by zero plus three’, writes Szirtes, nestled in a quiet suburb of London ‘populated by the upper levels of the skilled working class and a few middle managers’.

But as other members of the Hungarian diaspora have attested, the heady flavours of life in Central Europe can make the thinner gruel of English social life exasperating. George Mikes, a twentieth-century Hungarian émigré to Britain, summed it up in a classic one-line zinger: ‘Continental people have sex life; the English have hot water bottles’. Magda may never have been as acerbic as this, but the cross-cultural asymmetry was plain in her reaction to English cultural mores, notably food – ‘no taste at all, no punch, no gravity, no sentiment’. As much as Magda Szirtes tried to ‘English herself’ she never had it in her.

Set against her irrepressible will to survive detention in Ravensbruck (she was rescued weighing just thirty-eight kilos) her premature demise at the age of fifty following an adult life scarred by cardiac weakness amounts to a death foretold. Magda could have asked for no finer obituary than this sensitive account.

THE PHOTOGRAPHER AT SIXTEEN: THE DEATH AND LIFE OF A FIGHTER

Read John Munch’s #RivetingReview of AND MY HEAD EXPLODED. Tales of Desire, Delirium and Decadence from Fin-de-Siècle Prague﻿