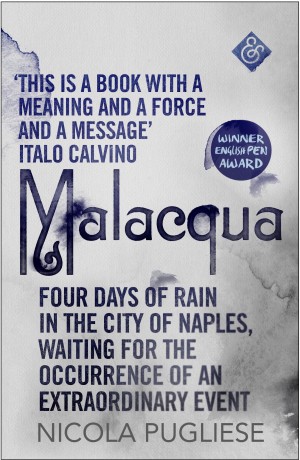 “Violent spates” of rain pelt the night-time streets of Naples at the start of Nicola Pugliese’s novel, ahead of a “resolutely pallid and funereal dawn”.  It’s an opening burst that signals a four-day inundation of the city’s physical and psychological infrastructure.

Within hours street lights across the city blow. Emergency teams admit their helplessness in the face of rain that displays an “irreversible obstinacy”. A road sinks into an “inert mass”. Two cars plunge into the chasm killing two passengers. A house collapses in seeming slow motion. Five people perish in their sleep as a result.

Pugliese is acutely aware of the sights, sounds and smells of Naples. This intimate knowledge, garnered through decades working as a journalist in the city, informs his rendering of life on the battered streetscape. But his scope reaches far beyond quotidian accounts of a local reporter’s ambulance-chasing routine.

As the unremitting four-day deluge seeps ever deeper into the Neapolitan psyche, surreal, absurdist and Gothic events come to the fore. Indeterminate moaning sounds echo in the city but an “anxious and imperceptible state of siege” seems to veil the source.

Two “explorations” are needed by “all the senior authorities” to pinpoint it. Vincenzo Mirasciotto, a “simple city policeman” has the job of laying the mystery to rest inside the “crenellated bastions” of the Maschio Angioino, the medieval keep, where the local municipality holds its meetings in the baronial hall.

By the third rain-sodden day a collective auditory hallucination appears to take an even stronger hold within the city when a 10-year-old schoolgirl is reported to be the first of many youngsters able to hear her favourite songs repeated in her ear by a five-lira coin.

Pugliese’s characters seldom interact with one another. What he describes — with a mixture of lugubriousness and world-weary sympathy — are ordinary people atomised by seemingly malevolent overarching forces, both meteorological and municipal. Most of his pomposity-pricking cynicism is reserved for the creaking branches of the bureaucracy as they seek to protect their hierarchical status rather than assure the safety of the city’s inhabitants.

Among the mysteries uncovered and resolved in the novel one remains to this day: why did Nicola Pugliese throttle his own creation Immediately after its first print run?

Translated from the Italian by Shaun Whiteside

Published by And Other Stories (2017)

Biog panel at base of story

Nicola Pugliese, born in Milan in 1944, lived almost all his life in Naples. Malacqua was his first and only novel. Published in 1977 by Italo Calvino, it sold out in days but at the author’s request it was never reprinted until after his death in 2012. This is the first time it has been available in English translation.