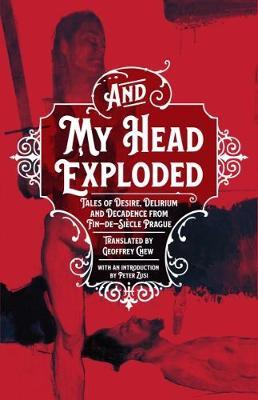 The international footprint of the Czech Decadent movement is vanishingly indistinct, its phantasmagorical offerings a subject of interest mainly among academics. Even sophisticated Czechs seem unaware of the details of its fever-dream contours and know still less about the lives of its main exponents.

An Anglo-Czech cultural impresario recently confessed to me his ignorance about the movement. As it happens, the gloom-laden inner sanctums of his splendid rented mansion in the shadow of Prague Castle would make a perfect venue for a film version of the preposterously Gothic goings-on that echo through this collection of stories.

Active in the 30 years before the outbreak of the First World War, none of the Czech movement’s authors has had anything like the international reach of an Oscar Wilde, a principal figure associated with decadence in Britain. More typical of the movement were such figures as Arthur Breisky, a one-time customs officer in rural Bohemia, who decamped to the US in 1910 and died in mysterious circumstances at the age of 25; or Frantisek Gellner, a drop-out from technical college and the military, whose preferred activities were drinking and visiting brothels. Both authors are represented here.

Nonetheless, haughty Anglocentric condescension about the movement is misplaced. Niche offerings from Central Europe do not automatically portend niche pleasures. Readers should have at least a nodding acquaintance with the anguished tropes on which these tales were based. Without some guidelines, the reading experience could be an uncomfortable walk on a very wild side.

Take Julius Zeyer’s ‘Inultus: A Prague Legend’. A bare-bones synopsis of the plot could be mocked as Slavonic Grand Guignol, the ravings of an overwrought mind. An impoverished young poet is approached on a night-time street in Prague by an ‘exceedingly beautiful’ Milanese sculptress, Donna Flavia Santini, who invites him to her home. There she persuades him to model for a sculpture of Christ on the cross. During the sittings he is driven to delirious agonies as he channels Christ’s passion and dies. In turn Donna Flavia in a fit of guilt strangles herself with her leather belt.

Horror upon improbable horror, and yet Zeyer’s story triumphs. How? It is sustained by a propulsive and unremitting central narrative. Its minor protagonists leap to life with cartoon-like ferocity, in particular, Placida, the housekeeper. Through ‘eyes of a yellowish hue and globular like those of a bird of the night’, writes Zeyer, Placida stares at some distant point ‘making out what no one else could perceive’.

She and Guidone, Flavia’s servant, who of course is dumb, are the perfect Gothic complement to the molten core of the melodrama, which hints at an equivalence between the hero’s suffering and the mortifications of the Czech nation. Finally, Geoffrey Chew’s crystalline translation gives clear expression to the tale’s mythic strength.

Not all the stories have such folkloric and quasi-religious resonances. The book’s title is a borrowing from ‘Tale for All Souls’, a story by Bozena Benesova, the sole female author in the collection. It’s an unsparing account of five days in the life of a woman in the grip of hallucinatory mournfulness in the wake of what appears to have been her husband’s death. The story manages to be simultaneously elliptical and forensic.

With surgical precision Benesova describes her protagonist’s feeling that her brain is ‘continually being brushed by tips of very fine hair’. After a visit to the cemetery where her husband is buried, she lies down on a sofa and her head ‘explodes’, bursting open ‘like a pair of forceps’. She looks forward to the ‘gift’ of release from her travails when her 12 months of mourning are at an end.

Not all the material in the collection is an unrelieved exploration of morbidity. Frantisek Gellner, for one, brings his beer-drinking experience to bear in ‘My Travelling Companion’, the story of a ‘painstaking’ pub crawl through Austria and Bavaria. The companion in question is a 23-year-old giant who ‘could barely peep through his fat, bloated face’ and was ‘renowned for his ill-bred behaviour’. A welcome draught of the ‘divine amber liquid’ to savour and remind us of the book’s Czech heritage.

AND MY HEAD EXPLODED

Tales of Desire, Delirium and Decadence from Fin-de-Siècle Prague

Translated from the Czech by Geoffrey Chew