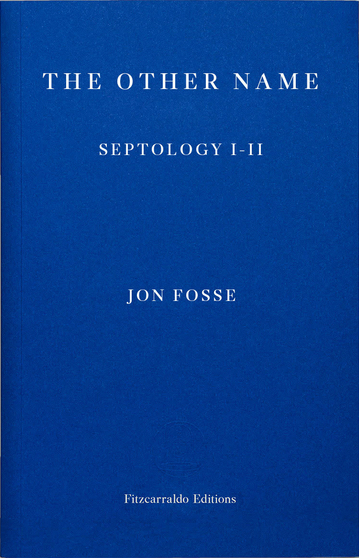 In the last decade, Norwegians appear to have become connoisseurs of unhurried culture, beginning with the introduction of ‘slow-TV’ in 2009, when we discovered that live footage from a camera strapped to a moving train made for spellbinding television. Readers might place Jon Fosse’s latest novel The Other Name: Septology I-II in the same category of entertainment – something that becomes intriguing precisely due to its longwinded monotony.

Fosse has long been considered one of Europe’s greatest writers, and bookies have frequently placed him high on the list of contenders for the Nobel Prize in Literature. Despite this, and despite having been translated into more than forty languages, Fosse’s work has not yet gained a substantial following in English. This might be why The Other Name’s Klein Blue dust jacket carries an endorsement by Fosse’s compatriot and former writing student, Karl Ove Knausgård.

Now a literary superstar, Knausgård’s approval is often slapped across covers of translated volumes of Norwegian fiction, but Fosse should be able to hold his own. The first two installments of an ambitious seven-volume series, The Other Name has already been longlisted for this year’s International Booker Prize (the shortlist will be announced at the beginning of April), proving that the Norwegian veteran is still in his stride and finally gaining some well-deserved ground in England.

It is difficult to summarise any work by Jon Fosse, far less quote from it. There is seemingly little plot – language and rhythm are what matters as he draws out the novel’s lonely, slow-moving landscape. We follow the ageing painter and widower Asle (by now a recurring character in Fosse’s fiction), a dried-up alcoholic who still retains his drink-induced hallucinations. His every action, impression, or flickering thought is described in minute detail as he moves around the weatherworn west coast of Norway. It is Advent, and Asle’s grief for his deceased wife Ales is tangible.

Not much happens, and this standstill makes Fosse’s minute descriptions of everyday activities pulsate. Asle examines his paintings, meditating on their blend of darkness and ‘soft, invisible light’. Not far away, in the city of Bjørgvin, lives another Asle, a less successful painter who has failed to beat the drink. The namesakes’ lives intertwine as Fosse has them struggle against their art, their loneliness, and, occasionally, their god.

There are secondary characters, such as Asle’s neighbour Åsleik, lonely and without money; there’s Guro, and Asle’s gallerist Beyer. Most other characters are only known through their titles – Taxi Driver or Handyman. But there always seems to be a slight disconnect. There are brief moments of release, such as when Asle has an erotically charged meeting on (of all things) a swing, and the Pinteresque dialogue that follows shows how Fosse the novelist is not afraid to make us of his playwright’s toolkit:

‘Every child likes being up in the air, she says

And every grown-up child, he says

We do anyway, he says

We do now, anyway, he says

But now we’re saying such dumb things, she says’

Jon Fosse is blessed with the ability to write great prose that is dense but never convoluted, even when he seems to have done away with punctuation altogether. In The Other Name, this has a mesmeric effect – Asle’s meandering thoughts appear to be streaming, ebbing, only broken up by an affirmative ‘yes’ or the occasional ‘I think’. In pages of sinuous prose, Asle casts his mind about and grapples with questions so big only Fosse would dare tackle them using everyday words with such sincerity.

One reason why Fosse has not achieved a wider readership in England might be his use of nynorsk, a second form of written Norwegian. The inherent poeticism of this language is notoriously difficult to emulate, but while the textual quality of Fosse’s nynorsk is lost, Damion Searls’ deft translation renders the English prose just as hypnotic as in the Norwegian original. Regardless of language, The Other Name might very well be Fosse’s finest work to date.

THE OTHER NAME: SEPTOLOGY I-II