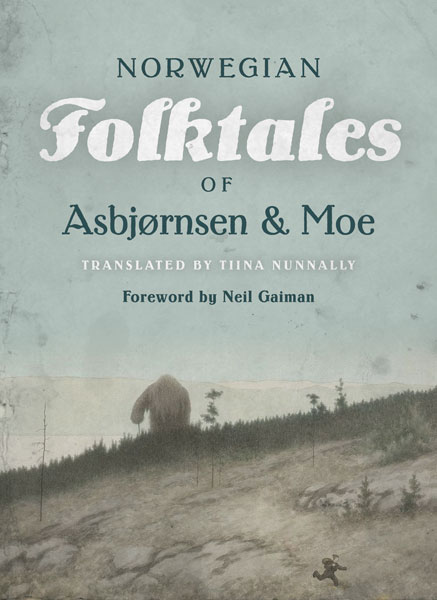 A year ago, I was given the chance to leaf through Roald Dahl’s mother’s book of Norwegian fairy tales. The slim volume, held in the Roald Dahl archives in Great Missenden, were published in 1909 and contained fourteen stories collected by Peter Christen Asbjørnsen and Jørgen Moe. The stories’ morbid blend of the frightening and the darkly funny completely transfixed the Dahl children, and would later become a hallmark of Roald Dahl’s own writing. Now, Asbjørnsen and Moe’s full collection of sixty folk tales, described by translator Tiina Nunnally as ‘a cultural treasure trove’, has been published in English for the first time.

Not quite as grim as the Grimm fairy tales or as heart-wrenching as those of Hans Christian Andersen, the tales collected by Asbjørnsen and Moe were founded in a strong tradition of oral storytelling. Inspired by the Brothers Grimm, Asbjørnsen and Moe were the first to write down fairy tales that had been passed down through generations, viewed by many as ‘mere nursery-room chatter’. Neither man was a writer by profession: Asbjørnsen was a successful oceanographer and zoologist who helped introduce the works of Charles Darwin to Norwegian readers; Moe nurtured an interest in philosophy and Romantic poetry, but ended up studying theology and later worked as a Lutheran pastor in eastern Norway.

The two men published their collections of folktales in the mid-1800s, at a time when Norwegians were constructing a new national identity for themselves having gained independence from Denmark in 1814. During this period, a quintessentially Norwegian culture was crafted in a matter of decades. The stories collected by Asbjørnsen and Moe are firmly anchored in Norwegian geography and everyday life. Often moralistic, but not without humour, they are filled with talking animals, lying princesses, and lurid trolls outsmarted by the devious Ash Lad, who, like Cinderella, is named due to his habit of poking around in the ashes. Some of the stories are meant to explain the natural world, such as ‘Why the Bear Has a Stump of a Tail’ (he once used it as fishing rod); others are spine-tingling – I can still remember the terror I felt when first reading ‘About the Giant Troll Who Never Carried His Heart with Him’, where the troll, smelling Ash Lad hiding under his bed, exclaims: ‘Ugh! It smells like a Christian man in here!’

In the early publications, painter Theodor Kittelsen’s rough illustrations perfectly capture the barren charm of the Norwegian landscape. Kittelsen made the trolls – large, ugly and often three-headed – look as though the country’s pine-clad mountains and rocky islands had been given legs to walk on. ‘[Kittelsen’s] trolls made sense’, Neil Gaiman writes in the foreword; ‘they were as much a part of the world as the trees and the hills.’ Sadly, only a couple of his illustrations are included in this volume.

Instead, this edition offers some interesting contextualisation in the form of various forewords written by Asbjørnsen and Moe for the first four editions, where, among other subjects, they look at the parallels between their stories and Norse mythology. Translator Tiina Nunnally perfectly captures the simple yet archaic tone of the original tales. Untranslatable Norwegian words such as ‘daler’ and ‘lefse’ have been left in italics, adding wonderful texture to the translation. The riches of Norway’s ‘cultural treasure trove’ appear to be in good hands.

THE COMPLETE AND ORIGINAL NORWEGIAN FOLKTALES OF ASBJØRNSEN & MOE

Published by University of Minnesota Press (2019)