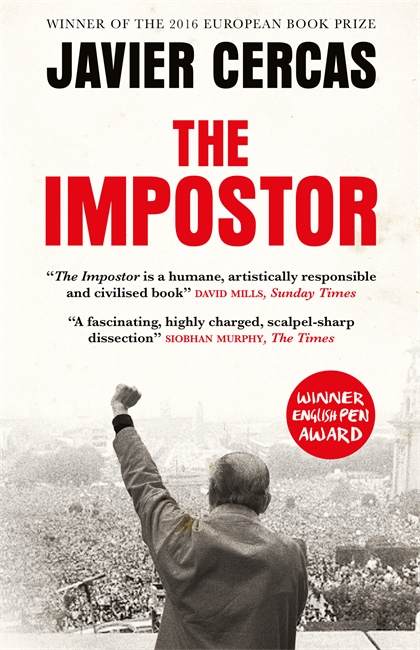 This is a book with three narrative strands. First we have the life story of Enric Marco, as pieced together by Javier Cercas, or rather his authorial alter ego. Marco was the heroic figure of the Spanish historical memory industry, whose claims of being imprisoned in a Nazi concentration camp were proven to be false in 2005, turning him into a great pariah. The story of Javier Cercas going through the process of deciding to write about Marco provides the second thread; and the third is a thorough but anxious investigation into the problematics of writing historical non-fictional fiction.

The responsibilities of the writer who brings history to light create the burning questions at the heart of this book: what is the value of giving attention to someone like Marco? Why does the world need to know the motives behind his deception? If we understand him, is there a risk of justifying his actions? What kind of a responsibility does the writer of historical non-fictional fiction have towards his readers, whose understanding of the historical event will be conditioned and informed by the attitude of the writer, but who might also read against the grain, with more or less nuance than the writer intends? In this case, there is also the wider question of the problematics of writing about the Holocaust, the Spanish Civil War and the post-Civil War years, and the cultural and administrative infrastructures that have developed around the historical memory phenomenon.

The culmination of the novel is an imaginary conversation between Cercas and Marco (as opposed to the many ‘real’ conversations we are told they have) in which Marco accuses Cercas of benefiting from the historical memory industry – of writing ‘fake history’ that people take to be real. Inserted into the wider narrative, this conversation works as an outlet for all the fears and concerns that have been building up throughout the novel in the authorial alter-ego Cercas. Cercas writes about his anxiety about being an impostor; that is, pretending to be a writer concerned with truth, who actually writes bite-size historical novels that only pretend to be non-fiction, but which sell well and allow everyone to feel good about themselves. There is the question about the value of bringing specific historical information to the public, but also the question: what does the author get out of it? What is his (most writers and thinkers in Cercas’s world seem to be men) contribution? Unlike for academic historians, there are no heavily policed community rules to restrain his inventiveness. Enric Marco’s lies are made up of historical information that he has read and repackaged as memory. What is the difference between what Marco does, and what Cercas does?

I don’t know if the real-author Cercas actually did what he says he did: met with Marco and got his agreement and collaboration to write the book. The idea that he did not – perhaps he contacted Marco, was rebuffed, and decided to write a story about collaborating with Marco anyway? – is appealing. As a treatment of the great impostor, it would be fitting. As a treatment of the inquiry into historical non-fictional fiction, it would be glorious.