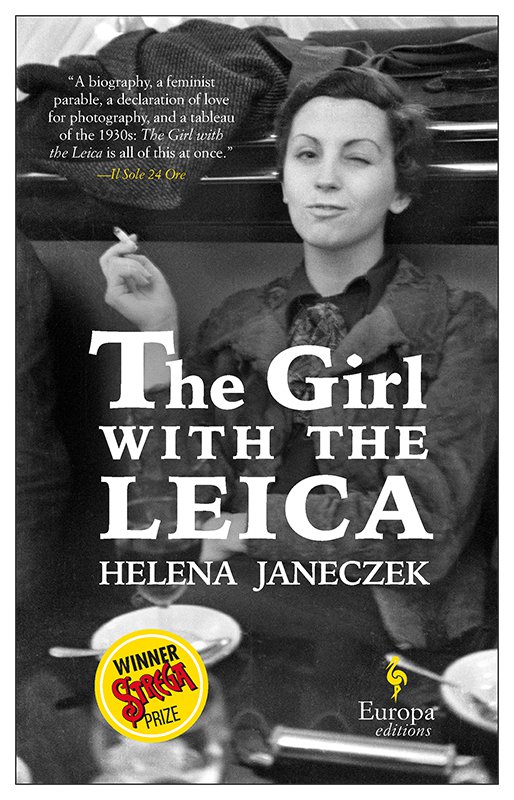 #RivetingReviews: Jennifer Sarha reviews THE GIRL WITH THE LEICA by Helena Janeczek

In 2018 the Strega prize for best Italian fiction was awarded to Helena Janeczek, a Polish-German novelist writing in Italian, for La Ragazza con la Leica. Janeczek’s Italian is visible in Ann Goldstein’s translation, which maintains the original phrasing where possible, resisting the temptation to transform it into smooth, unnoticeable English. We are allowed to see how the rhythm of the language is made to work; it punctuates, and keeps thoughts anchored to the wording. Goldstein’s text offers the English reader the rare opportunity to experience the emphatic potential of Italian sentence structure.

The question of accessing information through and across other people’s interpretations is central to the novel. Gerda Taro is a legendary figure: one of the first female photojournalists, tragically killed while covering the Spanish Civil War, and the partner of Robert Capa. Janeczek’s novel looks at Taro’s life as a construction of formative events and moments, but not with an eye to her later legend. Rather, Gerda Taro is brought to us through the spaces carved for her in the lives of others; the private histories her friends told and retold about her.

The Girl with the Leica weaves trajectories through the reminisces of three of these friends: when they last saw her, how they first met her, why they loved her and what stories they made together, but also the moments of banal intimacy that only matter to the people concerned. They are disjointed in chronology and are coupled with constant reflection, attempts to understand or explain Gerda. All are told years after her death, sometimes decades, and embedded in the current lives of the tellers, who are trying to get on with their lives while Gerda intrudes.

One of the most impressive things about this novel (and there are many) is the way Janeczek writes the tragedy of Gerda Taro’s death, through the never explicit but always palpably endless grief of her friends. Their accounts do not linger there, but they are at all times aware of the reality of her death. Every story about her charm and her daring serves to cut as well as soothe, and by seeing how Gerda Taro filled the lives of her friends we are also made to feel her loss.

Taro was in her lifetime regarded as an anti-fascist heroine as well as a talented photographer, and recent evidence has raised questions about whether some of Capa’s best-known photographs were in fact taken by her, and whether her death was really accidental. Such debates and scandals Janeczek leaves aside: what her work is focused on is Gerda Taro as a woman whose life was richer than her final few months of fame.

THE GIRL WITH THE LEICA