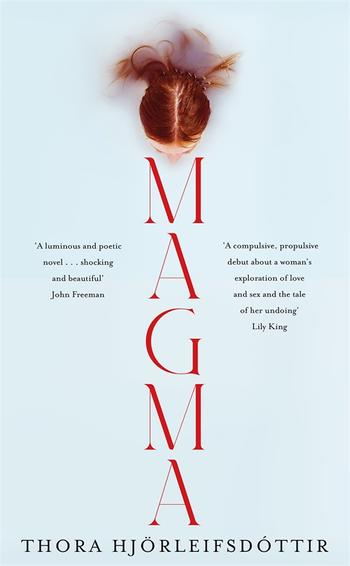 Thora Hjörleifsdóttir is an Icelandic poet and novelist, and has previously published three collections with her poetry collective, Imposter Poets. Magma is her first novel and is more plain than poetic in its language, and while it has light touches of both humour and horror, it is effective in arousing a most visceral anger.

A young woman, Lilja, is explaining her relationship with a slightly older man – both are in their twenties – and the difficulties she faces in making herself good enough to be his girlfriend. That we do not know whether this expectation is ever explicitly stated by him, or merely assumed by her, is one of the subtleties of the book. Lilja is talking to herself and to the world, and in doing so she uses arguments she believes to be universal – about body fat and body hair, what women should sacrifice for love, what a woman must do once she is in love. Sometimes she tells us these are his opinions. Sometimes she presents them as truths universally acknowledged. What emerges – for Lilja and for the reader – is a horrifying and horrifically recognisable straitjacket of norms.

When you pick up this novel, you would most likely know that it is a story about abuse, and Thora Hjörleifsdóttir is perhaps relying on this, in order to play with our preconceived ideas of what abuse looks like. You might assume that the plot will follow a certain pattern, and you might anticipate certain kinds of events; this anticipation, and the question on which it is based – what is abuse? – imbues the story with an explorative tension. We see Lilja’s misery push her to cut herself, and we see her mental and physical distress after she has agreed to sex acts that she does not want. But we also see the societal and structural norms that enable her boyfriend’s odd behaviours and beliefs: he takes Lilja to a family party, refuses to introduce her or explain her presence, and occupies himself with a book he has explicitly brought for this purpose because he finds his family boring. He has an overwhelming belief that his desires ought to be met and the world remade so that he need not do anything he dislikes. That Lilja attempts to meet his needs might be a result of his gaslighting behaviour, but her belief that she should do so – that the world owes him this – suggests a wider societal grooming.

Lilja is not angry; she accepts everything as her dues. This makes the novel an easy read on the surface, but the deft lightness with which Thora Hjörleifsdóttir narrates Lilja’s attempts to make sense of her life hints at the gaping horror underneath. It is up to the reader whether they choose to look.

Read Jennifer Sarha’s #‎RivetingReview of HOW ARE WE GOING TO EXPLAIN THIS? by Jelmer Mommers