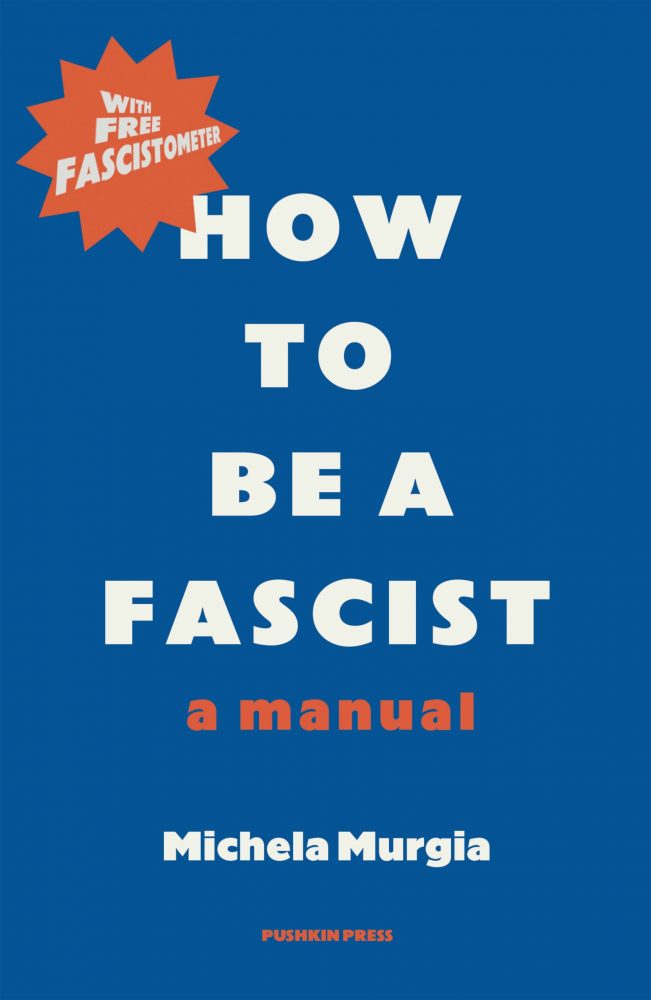 #RivetingReviews: Jennifer Sarha reviews HOW TO BE A FASCIST by Michela Murgia

‘I write against democracy’, begins Michela Murgia, which rather grabs you by the throat as beginnings go. What follows is, technically, a guide to fascism with insights both pragmatic and conceptual: how to manoeuvre politics and populism within Western democracies; and how to understand and adhere to the philosophical premises of fascism.

But the book can also be read as a pitiless interrogation of our Western democracies as they currently stand, and the laziness and corruption that enable fascism to grow.

Murgia is an Italian writer, critic and journalist, also known for her radio and TV appearances and her political activism, particularly in relation to gender equality, anti-fascism, and Sardinian independence. Her previous works include a satirical novel on telemarketing operatives, and a novel about euthanasia in 1950s Sardinia.

How to be a Fascist is a short book structured as a thematic guide. It covers how to manage committees: keep them talking so that nothing happens, and then inform the population that since nothing gets done, what you need is a strong man to cut through the red tape. How to manage gender politics: tell women that they are special and need extra support – especially women living in poverty or precarious circumstances, who might need access to food programmes or social services; keep them grateful and busy, not troubling themselves about equality. Among the many strengths of Murgia’s book are the connections she draws between the political methodologies of fascism on the one hand, and on the other the cultural norms they promote. Indeed, the return to normativity – of the traditional family, of gender relations, of social and political hierarchies – and the alleged naturalness of this normativity, are shown to lurk beneath the most basic of political activisms.

Any respectable Guardian reader may of course recognise many of the ideas presented here, and that will give them a certain amount of satisfaction. Yet other, more careful readers will also note the challenges the book delivers: we are all opposed to fascism, but are we so strongly opposed that we would be willing to create an alternative, to engineer and maintain a complex social structure? What if we had to discuss ideas, on the grand scale, with strangers or colleagues or family members – could we do that? Could we bear the potential embarrassment of that? What if we had to present ourselves as people who take politics seriously? Sadly, the book does not offer guidance on this.

HOW TO BE A FASCIST

Jennifer Sarha leads an exciting double life: a researcher of obscure European history by night, a wrangler of research funding applications by day. She is attempting to learn all the languages in the world and reviews regularly for the European Literature Network.

Read Jennifer Sarha’s #‎RivetingReview of HOW ARE WE GOING TO EXPLAIN THIS? by Jelmer Mommers