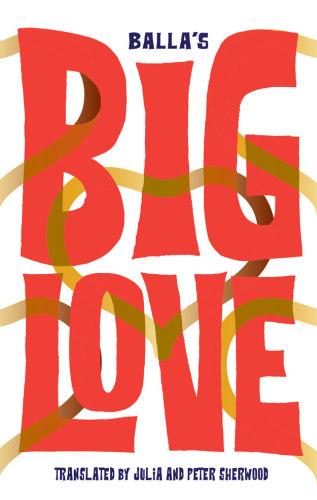 Balla’s Big Love is a short novel about the stress of living under capitalism. Apparently an autobiographical work (according to the introduction, but one should always take such declarations with a pinch of salt), Balla’s protagonist Andric lives in a dispassionate relationship with his girlfriend Laura and has a mundane job as a minor civil servant, where he argues with his clients about whether they are clients, and spends a lot of time thinking about his own life. One might see it as the hipster parody of the ‘middle-aged man contemplating adultery’ trope, but there is more going on than that.

One of the recurring threads is the anxiety caused by living in a modern liberal democracy – the punishment for societal and social failures is different from that experienced under communism, but is no less damaging. What Andric and his friends experience is ‘preventative fear’ – the constant anxiety of anticipating failure, in anything from romantic relationships to customer-service experiences, from how hard should you work at your job to how should you open a car door. In all these things there is an expectation of rules, yet no one knows what they are. Balla’s novel hovers between an ironic commentary on such difficulties, and an honest exposé of the behavioural dysfunctionalities caused by living under capitalism.

Andric is a no-longer young man failing to succeed in adulthood according to all the usual criteria (which he himself provides); but it is also clear that this is not something that troubles him very much; however, he does worry about whether it should. He is more concerned with observing himself in the process of failure than he is worried about failing. The question that seems to underlie all his preoccupations, as well as all his resistances, is what would happen if he were to succeed in all the expected things – behaving like the right kind of boyfriend, the right kind of employee, or the right kind of participant in a liberal society. Would there be freedom; would there be ease?

I think we all know the answer to that.