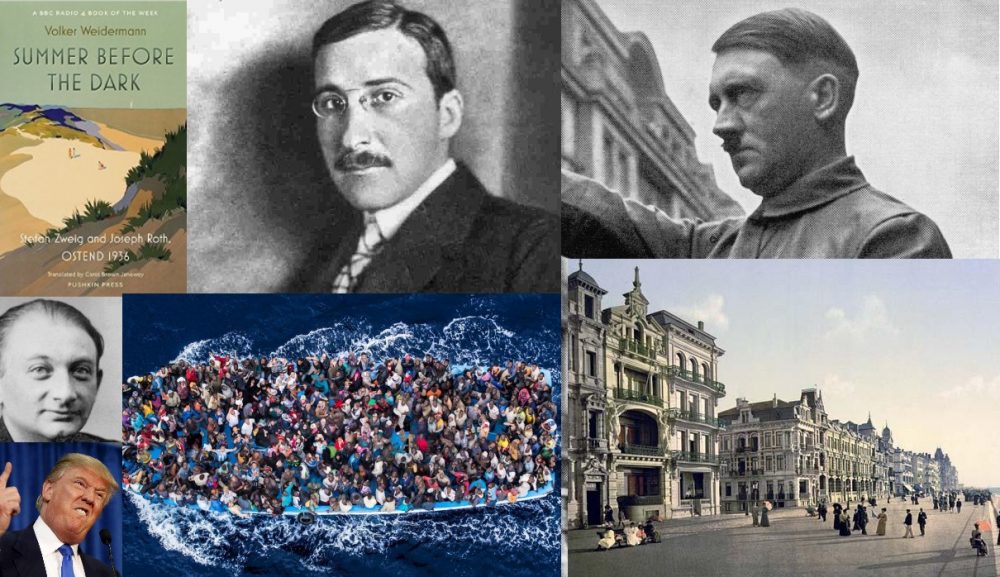 Literature is a site of dreams. It’s also where dreams dissolve, where the writer imagines reality for what it really is. Stefan Zweig and Joseph Roth, two of the greatest gifts to what is now no longer called ‘European Civilisation’, spend a photogenic summer in what now no longer resembles Ostend, living reality as it isn’t, so that they can dream of it as it is. It’s 1936, and Germany dreams up another reality called ‘The Olympics’. Zweig and Roth, both Jewish, have decided to skip the opening ceremony.

This is our entry point for Volker Weidermann’s dramatized account of that summer of 1936 in Belgium: Zweig inviting Roth to join him, so Roth can get sober, away from the Nazis, and write. A story of literature and friendship then, with an adjoining cast of characters including Arthur Koestler and Irmgard Keun. The writers struggle with how to live during oppressive times: retreat into quietism, like Zweig; commit to the struggle, like Koestler; get pissed, like Roth. They fight and make-up, write and get drunk, and mostly wonder if the reality they dream up on the page will ever match the dreamworld before them. It’s Weidermann’s own dream of reality, and an attempt to locate meaning (in war, life, art etc.), masquerading as a story of a bunch of old-style-Europeans getting wasted.

“Unfortunately the drinks in Belgium are mostly pure shit. No wonder you get poisoned in a country where schnapps is banned”, says Irmgard Keun. Still, getting drunk is easier than figuring out what to do.

Weidermann’s simple style (and what I assume to be a strong translation by the late Carol Brown Janeway), belies a complexity that offers us no easy answers. Ultimately, it’s about the stories we tell, and the dreams we have to sustain us through reality, and the realities people dream up or ignore so that they may continue to live, including the dream of friendship. Weidermann locates Zweig and Roth’s friendship within a spiritual struggle – they both want to take down the texture of reality and form it into books. At least, that’s what Zweig wants to do. Roth just wants money, so writes quickly, badly. Zweig spends much of his time trying to get Roth to focus – but it is not a purely disinterested intention. Zweig is under a grand malaise, and finds that he can only write because of Roth (Roth offers Zweig the necessary intellectual and creative material), and despite him (Roth is just hammered the whole time). Roth also has his “because of and despite” with Zweig: He can only survive because Zweig gives him friendship and money, but he survives despite Zweig’s friendship and money (which Roth cannot help but waste on drink).

Zweig lives because of and despite literature. He realises how dependent his whole life, from his psychological make-up to his public image is bound by books. Without them he simply could not be: an idea he extends to whole cultures. He and whole cultures are able to live and grow because of the psychological complexity books offer. However, books can also cut you off from reality, become a safety net, an escape, and, if Zweig can admit it – an excuse. Zweig awakens (implicitly) to the horror of the Nazi book burnings, which is not simply a culture trying to rid itself of unwanted elements, but to destroy possibilities of meaning, and replace it with a single one, encapsulated in another book, Mein Kampf. The sheer proximity to our own times of news and false-knowledge, of tyrants rising and cultures shutting themselves off, or in, makes me think of how the internet performs a similar cultural function to all those books. But unlike books and Nazi book burnings, the internet is both the book and the bonfire.

Furthermore, the book intentionally and unintentionally sits at the intersections of competing and sometimes contradictory priorities: Art vs. Life, Reality vs. Dreams, History vs. The Present. While much of it is dedicated to exploring the strains these claims make upon people, the book itself can act as a fulcrum between the reality represented in the book and our very own reality, enabling a number of possible readings to emerge. Its original publication date was 2014, it’s translation date, 2016. In other words, a real-life refugee crisis occurred in the intervening time. This sometimes makes it difficult to countenance the Gatsby-esque theatricality of their predicament: Emigres complaining about bad champagne, not refugees making camps at Calais. Imagine if we called Syrians émigrés. Further transformations between the publication and translation dates enable possible readings: Germany as perpetrator vs. Germany as saviour of refugees; writers escaping tyranny vs. a liberal elite cut off from everyday concerns. The book only mentions Hitler about five times and so I will only write Trump once.

I first assumed the ‘dark’ in the title referred to war – but there were a few more summers to go before that happened. The dark is about what happens when you lose those sustaining dreams, and when you realise that reality may be too much, even for books. The dark is the dark of dying dreams and dying friendships. The German title is Sommer Der Freundschaft. If literature is the site of dreams, it’s also where dreams are dissolved.

Summer Before the Dark

Translated from the German by Carol Brown Janeway