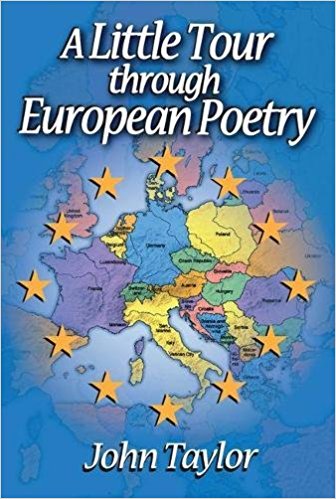 Don’t be misled by the adjective ‘little’ – Taylor’s ‘little’ tour takes us across 288 pages of 34 essays; across Europe expanded for the purpose by Turkey and Russia; a tour taken through poetry but including fiction. The sheer scope of this literary travelogue is a joy. Who in their right (that is, traveller’s) mind would object to an unexpected change in the itinerary, a surprising detour, a serendipitous encounter?

Taylor, author of both poetry and prose, columnist for the Antioch Review, translator from French, Greek and various other European languages, is the best guide we could wish for. He’s well-read not only in recent European poetry, but also in the canon: from Hölderlin to Venzlova. These two examples of individual classics – in one early essay and one towards the end of the collection – help outline Taylor’s territory. They also illustrate his charting method: some texts concentrate on one writer only, others review a group, for example, Albanian or north European poets. Some dust down more obscure (from our vantage point) names, such as the Romanian Francophone Benjamin Fondane or the Italian Sandro Penna; others discuss translations of selected Swiss poets (among them, José-Flore Tappy – look for Taylor’s selection of her work) or the dichotomy between Estonian Kristiina Ehin and Galician Mariá do Cebreiro.

Importantly, Taylor reads his chosen authors in the original languages he knows and those he is happy to learn on the hoof, assisted by linguistic curiosity, friendly local informants and phrasebooks. When he doesn’t know the language, he can resort not only to the English, but also to the French translation. One particularly evocative example comes from the 26th essay, entitled ‘A Rather Late Letter from Wrocław’, which shows Taylor travelling from France to Poland for a short story festival, conquering the obstacle of a train strike, equipped with the French Sur la route de Babadag, a version of Andrzej Stasiuk’s Jadąc do Babadag (itself a travelogue in prose), which he translates in snippets for his English text and its English-speaking readers. This essay, the only one that doesn’t deal with poetry, forms another exception: a guest of an international festival, Taylor is identified as a Franco-American, which makes him pause and helps us understand his geographical positioning and passions: He’s lived for more than thirty years in France, after twenty-three years in the USA.

The ‘Letter from Wrocław’ demonstrates another enjoyable feature of this literary tour round Europe – here cities themselves often become protagonists: Frankfurt, Weimar, Florence, Ljubljana, Prague or Angers (where Taylor lives and which appears in the closing essay). We follow our guide, a flaneur in his appreciation of bridges, lamp-posts, exhibitions, bookshops, and, of course, writers inhabiting these cities. Besides, Taylor offers us insights into their histories. One of the many surprises of this book from 2015 is how much of the history retold still circles around the Second World War or the years immediately after (part of the communist histories of some of the countries visited). If it’s not WWII, then it’s the Yugoslav War…

Looking at the golden stars and EU flag on the cover of this book, we should feel thankful that we can today embark on our travels in relative peace. Even if Europe’s new geopolitics may hinder our physical journeys, we can cross borders within this continent thanks to its poetry and its translations.

John Taylor’s 34 essays should not be treated as a whistle-stop tour, but as a trip with stop-overs, so that we can take time to follow up further writing and information on these authors introduced with a couple of pages and some pertinent quotes – and then read on, helped also by the invaluable bibliography.

A Little Tour through European Poetry