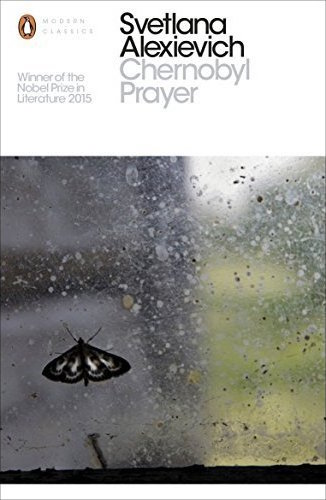 On 29 April 1986, the British public learned that a disaster had occurred three days before at a nuclear plant in the Soviet Union. Since that day the once-obscure place name “Chernobyl” – a town in Ukraine on the border with Belarus – has become synonymous with an unknown, apocalyptic future moulded by the atom.

This book, written by the Belarusian author Svetlana Alexievich ten years after the disaster, published in Russian in 1997 and presented to the English-language world by Penguin Books in a striking new translation last year, when we marked Chernobyl’s sad thirtieth anniversary, tells quite a different story from the official account. By way of a telling introduction, the author provides some shocking statistics: “The Soviet Union sent 800,000 regular conscripts and reservist clean-up workers to the disaster area. The average age of the drafted workers was thirty-three, while the conscripts were fresh from school. In Belarus alone, 115,493 people are recorded as clean-up workers. According to figures from the Belarusian Ministry of Health, between 1990 and 2003, 8,553 clean-up workers died. Two people per day.”

As it was thirty years ago, it is still the case that most of the statistical data relating to the Chernobyl disaster either do not exist or are hugely obscured, classified and mythologised. The power of the explosion was three hundred times that of the bomb that destroyed Hiroshima. The official casualties, however, totalled only 165: 31 people killed in the blast, and 134 dying from the radiation. At the same time, an area two hundred kilometres square – home to five million people – was affected. It is the voices of these people that Svetlana Alexievich intends to make heard. As the writer formulates it, she “paints and collects mundane feelings, thoughts and words” and tries “to capture the life of the soul”. She “met and talked with former workers at the power plant, with scientists, doctors, soldiers, displaced people and people who returned to their homes in the Zone”.

In all her books Alexievich focuses on ordinary people caught up in tragic and catastrophic historical events, narrating their experiences using a montage technique. As if in a film documentary, she presents extracts from her interviews with real people who have taken part or were affected by a major catastrophe, be it the Second World War, the Soviet war in Afghanistan, the Chernobyl disaster or the collapse of the Soviet Union. As a result, the tone of her books provides a sharp contrast with the official line on these events, which portrayed them as, for example, an heroic sacrifice for the Soviet Motherland or a shameful episode that should never be spoken about. In 2015 Svetlana Alexievich became a Nobel Prize Laureate in Literature “for her polyphonic writings, a monument to suffering and courage in our time”.

It could be said that Alexievich follows in the footsteps of Ales Adamovich and Daniil Granin’s A Book of the Blockade, or Solzhenitsyn’s The Gulag Archipelago. Some critics even trace her style back to Truman Capote, Norman Mailer and Joan Didion. In my view, though, Alexievich has turned documentary-based prose into a unique tool; she has created a genre that I would describe metaphorically as “written oral history”, in which she imitates in writing the effect of an oral monologue. Significantly, she does this while making a special effort to remove the figure of the author  from the fabric of the text, therefore dramatically shortening the distance between her speakers and the reader, creating a narrative in which the reader feels completely unprotected by any intermediary. The reader is therefore “naked” in front of the text, wounded by the simple words in which the stories are expressed:

“There’s one conversation I remember. Someone was pressuring me: ‘You mustn’t forget this isn’t your husband, it isn’t the man you love, it’s a highly contaminated radioactive object. You’re not a suicide case. Pull yourself together.’ But I was like a crazy woman: ‘I love him! I love him! While he was asleep, I whispered, ‘I love you!’ Walking about the hospital courtyard, ‘I love you!’ Carrying the bedpan, ‘I love you!’”

In Chernobyl Prayer Alexievich accentuates this technique by giving her chapters titles such as “From conversations” and “From the grapevine”, as if she has simply overheard people’s voices, rather than recording them:

“We are fatalists. We don’t embark on action, because we believe whatever will be, will be. We believe in destiny; that is our history. Every generation’s been plagued with war and bloodshed. How could we be any different? Fatalists.”

“They are building camps outside Chernobyl to hold all the people who were exposed to radiation. They’ll hold them there, watch them and bury them.”

Although the reader hears multiple voices, this polyphony deceives. Alexievich’s narratives are well-orchestrated symphonies with just a few major tunes: the Soviet experience, the phenomenon of the so called “homo sovieticus” or “Red Man”, and the relations between the state and its citizens.

By taking her discussion of these themes to a human level, however, Alexievich makes her stories universal, beyond the former Soviet Union. And it is perhaps in this spirit that the translators chose the title Chernobyl Prayer rather than the Voices  from Chernobyl that was used for the 2005 American edition (both titles were used by the author). The former title, combined with the references to prayer and God at the end of the book, shifts the emphasis from collective experience to the individual perception of the catastrophe, in a way that, to my mind, strengthens the emotional impact of the story.