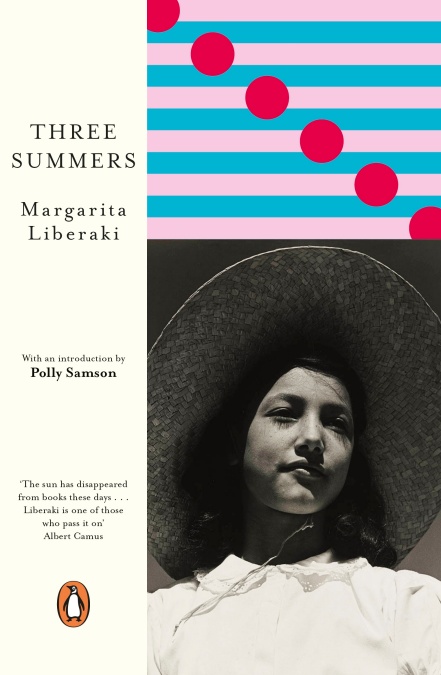 Three Summers by Margarita Liberaki is a modern classic in Greece, and since it first appeared there in 1946, it has never been out of print. It is now reissued as part of the Penguin European Writers series, with an updated translation by Karen Van Dyck.

Set in the countryside around Athens over three summers before the Second World War, it is the story of three sisters, Maria, Infanta and Katerina – the youngest, and from whose point of view the majority of the book is narrated. Reminiscent of Little Women and Ferrante’s Neapolitan Quartet, it’s a novel about young women on the cusp of adulthood in a world of warmth and beautiful gardens, restricted by family and small-village life. And despite the timing of its setting, it’s notably free of any hints of war.

The novels opens with the tantalising image of anticipated summer heat and presents the differences between the sisters:

‘That summer we bought big straw hats. Maria’s had cherries around the rim, Infanta’s had forget-me-nots, and mine had poppies as red as fire’.

Maria, the eldest, is flirtatious and hot-headed but quickly settles for marriage and motherhood. Katerina is dreamy and observant, while, for me, Infanta is the least well-drawn. They share secrets and fall in and out of love. Katerina is obsessed with the mystery of their Polish grandmother, who ran off with a musician and lost contact with the family. The girls’ parents are divorced, due in part to their father’s infidelities and their mother’s refusal to put up with them, and so the sisters navigate a testing and distant relationship with their father, who lives in Athens. The girls also consider what it means to be a woman with the limited life choices available to them; education does not factor so much, despite their fierce intelligence. Further on, Katerina and Infanta are in awe of Maria when she gives birth, and Infanta rides her beloved horse at breakneck speed around the countryside with a boy named Nikitas. By the third summer, Katerina is desperate to be part of a couple too, and falls in love with David, a handsome young Englishman, eight years her senior, who’s an astronomer and spends time in the village with his Jewish mother, Ruth.

There’s a dreamy, atmospheric quality to the book, with earthy descriptions of the landscape and its smells, the air like crushed apples, the changing hues of the sky as each day unfolds: the early light blue changing to a grey white in the heat, burning off to reveal deep blue with white clouds.

Margarita Liberaki always said Three Summers was based on her own life, with its emphasis on Katerina as a writer-to-be. She was a law student who married young and was pregnant while writing the novel. Less than a year later she divorced and moved to Paris, leaving her daughter to be raised, as she had been, by grandparents.

The novel’s title in the original Greek is ‘Straw Hats’, but for the American translator Van Dyck, that conjured up hillbillies rather than well-to-do Greek girls. She worked closely with Margarita Liberaki on the translation, discussing how translating was like motherhood, that to be observant and notice differences is one way to allow a child to grow up and for a translation to stand on its own. The result is a magical summer read.

Dymphna Flynn is a judge on the Costa Book Awards (First Novel) 2021. She reviews books for BBC Sussex & Surrey and on Instagram @dymphnaflynn. Dymphna was a books producer at BBC Arts for more than twenty years, and has a degree in French and Italian.