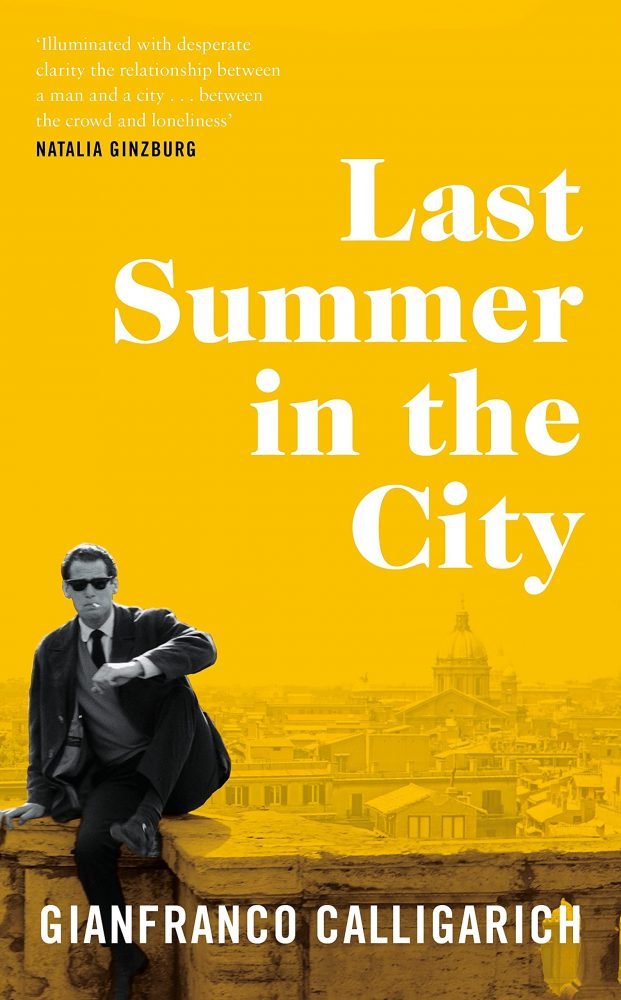 Walking past Waterstones on Piccadilly in late August, I was struck by their colourful window display for Gianfranco Calligarich’s Last Summer in the City, translated for the first time from the Italian into English by Howard Curtis. I’m pretty sure it’s unusual for a European novel to have such prominence, unless it’s by Ferrante or Slimani, so I had to investigate further.

Seen as something of a cult classic in Italy, the novel is set in 1970s Rome and suggests the black-and-white scenes of a Fellini film, while the protagonist Leo Gazzara harks back to a dissolute character from the pages of Flaubert or Balzac.

Leo has escaped his stifling and impoverished upbringing in the north, where he learned as a boy that it was better to be quiet than to disappoint his father. He works as a journalist, but he lacks ambition and drive. He is a sfigato – a loser. He doesn’t want to work, he drinks too much, and he is obsessed with the aristocracy. When asked where he would like to have been born, he replies, ‘In Vienna before the end of the empire.’ Restless, he’s waiting for something better to come along.

On the night he turns thirty he is invited to dinner at a palatial Roman apartment, and we see from the reactions of his hosts that he’s something of a leech. Calligarich creates some comic set pieces along with a sense of doom about Leo, who as well as arriving late at the dinner, rocks up badly dressed and soaked from the recent rain. As he approaches their white velvet sofa, one imagines the worst.

That night Leo meets Arianna, who claims that Proust is her favourite author, but later in her car he notices that her copy of Swann’s Way has never been opened. There’s a terrible inertia to this pair of lovers. She is ostensibly studying architecture so she can return to her native Venice to save it from sinking, but in practice she spends her days at the beach, and when they first try to make love Leo is ‘ice cold, inert, filled with sadness’.

Thanks to his friend Graziano, another feckless drifter, Leo lands a job at the RAI TV network, where on his first day he ends up looking after an old drunk executive who’s throwing up in the men’s room. And despite being tired of eating leftovers, poor Leo quits this job too. Increasingly aimless, he decides to travel back to Milan to visit his family, but on sighting his parents from afar, he dejectedly resolves not to bother them.

As well as being a beautifully written, witty and ultimately devastating love story, Last Summer in the City is an intoxicating tribute to Rome, with visceral descriptions of taxi rides at night, the rustling of leaves on plane trees, and the city’s lush scents in the heat of summer.

A word to the wise: the forward by the Italian-American writer André Anciman, who wrote Call Me By Your Name, is best avoided until finishing the novel. It’s too much of a synopsis, gives far too much away and it would be a pity to spoil such a terrific read about one man’s relationship with this wonderful city.

LAST SUMMER IN THE CITY

Translated from Italian by Howard Curtis

Dymphna Flynn is a judge on the Costa Book Awards (First Novel) 2021. A books producer at BBC Arts for over 20 years, she continues to freelance there on Radio 4’s Front Row and Bookclub. Dymphna has a degree in French and Italian.