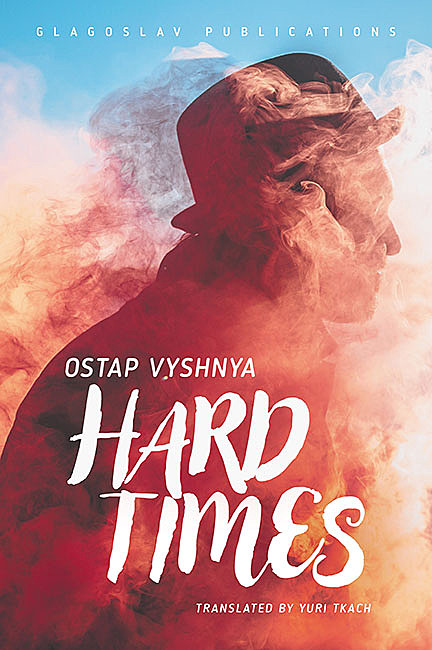 You, like me, may never have heard of Ostap Vyshnia. That’s the pseudonym of a Ukrainian writer and satirist who was very popular in Ukraine in the 1920s … words to make any reviewer’s heart quail at least a little.

But quail not. Some 200 or so pages later, my heart has stopped its faltering. And I find myself writing short sentences. With few adjectives. And wondering whether satire really travels well, or indeed is better left to travel on its own through time and translation, without packing some nice warm footnotes and perhaps a helpful guidebook first. And at the same time I find myself admiring Vyshnia’s pellucid prose, snappy short stories and the talents of his translator, Yuri Tkach.

Finally, I find myself thinking that, on reflection, too many historical or literary footnotes would have spoilt the meandering, often enjoyable and sometimes bleak voyage back to a time and a place undergoing a social and political revolution every bit as complex and unpredictable to the readers of 1920s Ukraine as today’s global politics may be to us.

Much of the fun for the liberal capitalist reader of 2018 (almost a hundred years or so since Vyshnia’s earliest stories were published) involves figuring out exactly who the target of the humour may be as it comes from an author whose fertile land has been nibbled, gobbled and sometimes bolted down wholesale by its neighbours to the east and the west.

Hard Times, republished in English for the first time since 1981, has been translated beautifully. Yet while some of the stories are timeless (the pitfalls of training puppies, the perils of fishing, and the universal hazard of mothers-in-law), any satire mocking Soviet life in 1920s Ukraine may be tricky for today’s reader to decipher unless they’re fluent in the language and mores of Soviet socialism.

Is he taking the mickey out of socialism, capitalism, or humans in general, or all three at once? His fictionalized autobiography clearly strays close to the truth but mocks his family, the capitalist landlady and the revolutionary peasant alike, as well as the new overlords. He was popular with a Ukrainian peasantry seeking to work on their class consciousness, yet also appealed to Russian readers, who would have needed no help decoding the satire.

Vyshnia was born to a peasant family in 1889 and managed to enter Kiev University in 1917 before dropping out to become a feuilletonist and writer. How much of his cod-autobiography in Hard Times is true, I do not know. In it, he states that he was one of 17 children – a claim reproduced faithfully in the pages of Wikipedia – but that his mother would have had 23 children had his father lived longer; a claim sadly not reproduced at all in the pages of Wikipedia.

But in 1919, Vyshnia was indeed arrested and imprisoned for two years. I know that because it says so in the online pages both of an old Soviet encyclopaedia, and in a Ukrainian reference website, so it must be true – that’s impartiality for you.

Perhaps not surprisingly, in the stories he began to write after that incarceration, he describes and satirises the worst of human nature – greed, lust, idleness, envy; they’re all here, thank goodness. But is Vyshnia a supporter or not? As a writer, surely idleness must be something he firmly believes in, kicking against the inhumane drive of the authorities to make Soviet man work a ridiculously long day, starting before 10am?

In the course of a life that must still resonate with Ukrainians today, Vyshnia lived in a country that was being torn at least into two by the government in Kiev (the Ukrainian People’s Republic, broadly supported by the powers of central and eastern Europe) and the government in Kharkiv, in the north-east (the capital of the Ukrainian Soviet Republic, supported by Soviet Russian forces, from 1919 to 1934) where Vyshnia was first imprisoned.

However, his stories from the 1920s, about peasants swindled of their cash for lame horses, vodka-swilling grannies, the battle of the sexes, and journeys at home and abroad –how to avoid cruel customs officers determined to strip travellers of their hard-won goods from Berlin’s decadent 1920s department stores – are often funny, sometimes bitingly so, especially on the subject of writers and writing (to be a neo-classicist, you need to read a lot of books, but to be a modern writer, none…) and on the travails of translating literature. He mocks himself, the writer, as much as anyone else, with the vigour of a young man who has lived both the hardship of the land and the ease of the office – and the politics that can get you arrested if you get them wrong.

In 1933, an altogether more serious imprisonment awaited. Vyshnia was sent to the gulag. He returned to his literary career in 1943, but the man and the writing that emerged after his incarceration was very different. His works were never as popular again. Not surprisingly, after ten years of hard labour, he tended to take the party line in full, and neither he nor his publisher ever again enjoyed the sales of more than two million copies he had achieved by 1930. The later stories in Hard Times are sometimes genuinely bitter, not least about publishers and publishing. He died in 1956, aged 67, in Kiev, and I read – this time on the back page of the book, so it must be true – that he is considered the father of modern Ukrainian satire. That I can indeed believe; and I suspect he’d rather like the idea of posthumous reprints, especially if his original publisher failed to benefit from them.

Often while reading, I caught echoes not of other writers or satirists of his time and place (not least because my knowledge of 1920s Ukrainian literature now consists in its entirety of Ostap Vyshnia) but of Kurt Vonnegut, John Irving and perhaps even Peter Cook: tellers of tales of humanity, politics, sex, class and relationships in eras of change.

It’s odd, but ever since I finished Hard Times, I’ve wanted to ask Ostap what he makes of Ukraine today, and of Vladimir Putin and Donald Trump. I want to demand his views on social media and Brexit, too, as we sit comfortably together, listening to his thoughts and stories distilled over a good chilled vodka under a hot Crimean sun.

Translated from the Ukrainian by Yuri Tkach