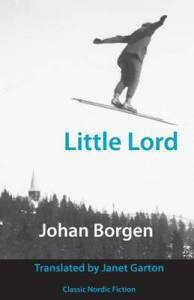 Little Lord is the first part of Norwegian author Johan Borgen’s trilogy focusing on upper-class boy Wilfred – the Little Lord of the book’s title – who is growing up in privileged circumstances in Kristiania, today’s Oslo.

Borgen chooses to contrast a boy on the brink of change with a Europe on the brink of war. In the book, we become acquainted with Oslo and the high (and low) society of its bygone days. Grünerløkka, which today is one of the city’s hippest areas – having gone from downtrodden and shabby to chic and trendy in the space of a century – is, in the early 1900s, when the book is set, a dangerous neighbourhood. It’s one of the places into which Little Lord ventures in order to express “his dark side”, his desire for excitement and to escape his loving but stifling home, where he’s expected to remain a small, immature child.

Clever, talented, well mannered and well loved, on the surface he’s the boy who has everything – everything, that is, except a father. Throughout the book Little Lord’s father, who died when the boy was very young, is alluded to and hinted at, ever-present, but never quite tangible. His death casts a long shadow over Little Lord’s life and most of the mystery around his father’s personality and death remains hidden throughout the novel.

Little Lord’s mother is kindly, if childish, and this is where the book rings less true for me. Although I realise it is sometimes necessary to suspend one’s disbelief when reading Little Lord’s discourse – the book is written from the perspective of a fourteen-year-old boy, but he often seems much older – I find it harder to do when it comes to his mother, Susanna, and the other female characters. And this, in my opinion, is where Borgen falls short: the women are rather one-dimensional compared to both Little Lord and some of the other male characters.

In addition, I found many of the book’s key figures, Little Lord included, anything but sympathetic and the  language has a flowery verbosity that can come across as exaggerated. This must have been a challenge for a translator, but this new English translation, for the most part, flows beautifully.

As a study of a young mind battling mental-health issues, Little Lord has contemporary merit, but, for me, most other aspects of the book work as nostalgia for a previous era.

Anna Maria Espsäter is a freelance, multilingual writer, originally from Sweden, but based in the UK for many years. She’s authored, co-authored or contributed to, more than twenty books on topics as varied as travel in Scandinavia and Latin America, South American gastronomy and everything you’ve always wanted to know about cats. www.annamariaespsater.co.uk