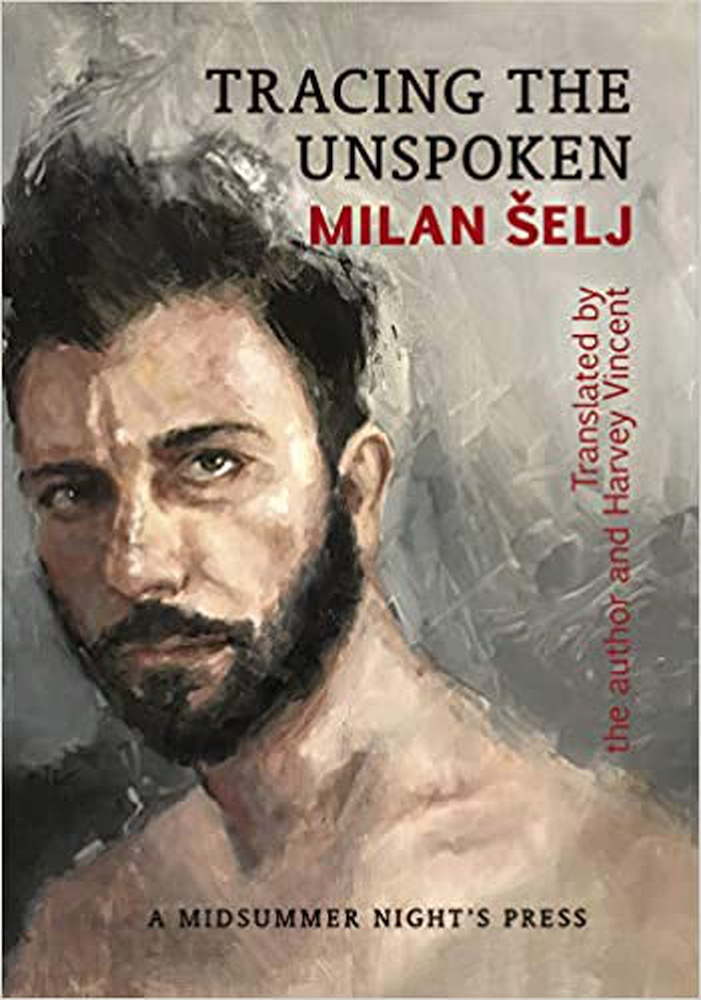 Even though Milan Šelj is a translator of poetry from English into Slovene, and has lived in the UK and spoken English on an everyday basis for some time, Tracing the Unspoken is his first book in English (he has published four poetry collections and a novel in Slovenia).

What a daring debut it is. Šelj does indeed bravely trace the unspoken: he writes explicitly gay prose poems, not shying away from gay desire, sex, passion and obsession. But this writing does not exclude you if you are not a gay man. The opposite in fact: what Šelj manages to create is something universal; something we can all relate to.

I found his brilliant, succinct pieces captivating and powerful. The language is stripped of anything surplus, and is sometimes shockingly direct, but that only makes Šelj’s writing even more punchy. Every now and then the tone softens and veers towards gently poetic metaphor:

‘Shards of restlessness often overwhelm your encrypted messages, sent from the room behind the locked door. The key I use to open it is getting thinner. Although you constantly provoke me, in my dreams you never utter a single word. As if you were convinced sharp blades of grass had grown in my ears and I would never hear anything you have to say’

The contrast in Šelj’s (and his translator, Harvey Vincent’s) language creates a powerful tension, as if one suddenly tripped when walking fast and was forced to look around, or, having fallen down, had to look at things from a completely new angle. The effect is refreshing:

‘In exchange for a few quid, he embraced me awkwardly when I brought him to my place and nervously undressed him with hungry eyes. He allowed me to kiss the two crescents of his closed eyelids and touch the birth-mark on his left shoulder. That was all I could get and I behaved like a guilty bastard stealing from a wretched beggar.’

There is a narrative thread running through the book. At the beginning the protagonist leads a sexually adventurous life, shags in cars and churches, goes home with older men, brings men to his place. Eventually he seems to settle into a relationship and everything that comes with one, including moments of tenderness and passion, but also loneliness and misunderstanding.

‘Why don’t you cut off your shirtsleeves and send them to me? I’ll embrace myself with them when I’m not able to shorten your absence. To save myself, I’ll search for consolation between the scraps of fabric and let your scent linger on the cuffs.’

Šelj’s collection is a real gem – something that I will be coming back to in the future, I’m sure. And I must give a shoutout to the publisher. Tracing the Unspoken is published in A Midsummer Night’s Press’s trademark series, which I absolutely adore. First of all, it provides great poetry – often in translation, often brave – that might be difficult to find elsewhere. But I also like the form factor of these little books, which fit in your jeans’ pocket and can be taken anywhere.

Published by A Midsummer Night’s Press (2019)

Anna Blasiak is an art historian, poet and translator. She runs the European Literature Network with Rosie Goldsmith. She has translated over 40 books from English into Polish and, mainly as Anna Hyde, Polish into English. She is a co-translator (with Marta Dziurosz) of Renia’s Diary by Renia Spiegel. Her bilingual poetry book, Café by Wren’s St James-in-the-Fields, Lunchtime, is out in April 2020 from Holland House Books. She has worked in museums and a radio station and written on art, film and theatre. annablasiak.com.