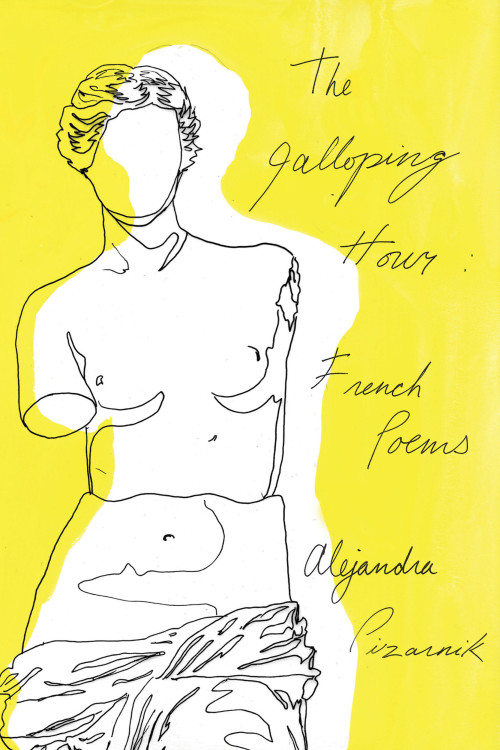 This is a very special collection, consisting of Argentine poet Alejandra Pizarnik’s poems and prose poems written in French during her stay in Paris in the years 1960–1964 and later, back in Buenos Aires, shortly before her suicide in 1972. Like her Spanish-language poems, the French ones (later also self-translated into Spanish) are full of themes typical of Pizarnik: intimacy, body, desire, the inadequacy of language (‘my language is the priestess’), insomnia, nightmares, absence and silence.

Pizarnik draws her inspirations first and foremost from her own life, but you can also see the traces of her readings of Baudelaire, Rimbaud and Artaud, as well as Kafka.

Pizarnik was a daughter of Eastern European Jews, who left what was then Poland for Argentina in the 1930s. She was brought up speaking Yiddish and Spanish at home. The French language came a little bit later for her. She moved to Paris to get away from her home and, most importantly, like other writers, to immerse herself in the bohemian life of the French capital, then the cultural centre of the world. She traipsed across the city, walked along Parisian boulevards, rummaged through books by the Seine. She met the Surrealists Max Ernst and Jean Arp, as well as some notable French literary figures, such as Henri Michaux and Yves Bonnefoy.

‘Sometimes we suffer too much reality in the space of a single night. We get undressed, we’re horrified. We’re aware the mirror sounds like a watch, the mirror from which your cry will pour out, your laceration.’

The Galloping Hour reads like prose – raw, poetic diary entries; very personal drafts. And indeed, according to Patricio Ferrari’s introduction, Pizarnik most likely didn’t intend this collection for publication, perhaps didn’t even think of it as a collection – although the loose sheets this set is written on are in fact numbered, which can be verified thanks to the inclusion in the book of photographs of Pizarnik’s original notes. This is not at all unusual for Pizarnik, who left behind a large body of unpublished manuscripts: poems, prose poems, fiction, diaries, reading notes and drawings.

‘I speak of discovery: felt the I in sex, sex in the I. I speak of burying everyday fear to secure the fear of an instant. The abyss of absence. But who’ll say: don’t cry at night? Because madness is a lie too. Like night. Like death.’

What Pizarnik writes about is the stuff of nightmares: her battles with her identity (her Jewishness as well as her never-expressed homosexuality), lack of self-confidence, loneliness and abandonment, her depression, dark melancholy. There is something haunting and painfully familiar about these themes, and at the same time obscure and strange. This is not a read for faint-hearted.

Translated from the French by Patricio Ferrari and Forrest Gander