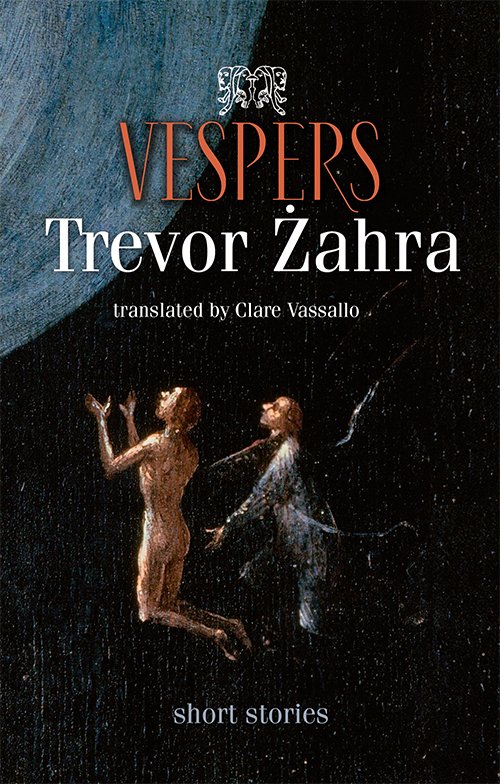 Before reading Vespers, I had never come across Trevor Żahra. However, upon reading Clare Vasallo’s foreword to her translation of this short story collection, it became clear that he is a household name on the island of Malta, a prolific writer loved by many. Now, thanks to Vassallo and Merlin Publishers, English readers can enjoy the work of this contemporary Maltese literary great for the first time.

Vespers brings together thirty-seven stories that deal with themes of family, relationships, love, life and death. The stories are short, punchy, and pull readers from one world to the next in the blink of an eye; we snap out of dream-like tales into reality, our laughter is transformed into a grimace, and the real suddenly metamorphoses into the surreal.

Żahra’s tales are most certainly funny. For me, the funniest in the collection – and one of my favourites – is ‘Letter to My Uncle’. In the story, we read the spiteful letter that a petty nephew writes to his late uncle. During his lifetime, the uncle spent years ridiculing and reprimanding the former’s taste in heavy-metal music. Somewhat of a music snob, he instead enforced classical music on the boy, who found this absolutely unbearable. Upon the uncle’s death, the nephew is merrily looking forward to what he expects to be a large inheritance. However, he instead learns that the deceased has spent all of his savings on installing a state-of-the-art sound system in his coffin, so that he can listen to his beloved classical music for eternity. To say the nephew is annoyed would be an understatement, and he certainly finds a humorous way to get his own back …

Whilst many of the stories in Vespers have a humorous and somewhat satirical edge, Żahra also tells some sweeter tales. For example, in one story we meet a young man and woman who work in the same bank. The pair are deeply in love with each other, but always seem to be in the wrong place or situation at the wrong time, meaning this love can never be acted upon. Over the years they repeatedly bump into each other, their feelings flooding back each time. However, for various reasons, neither of them is ever able to hold on to these feelings, and they continue to live their mediocre and somewhat empty lives without each other. After many years though, fate eventually lands them in the right place at the right time.

Despite this sprinkling of heartwarming stories and characters, most of Żahra’s tales, as mentioned, do come with a sharp edge of humour that verges on the satirical. Most often, this humour and Żahra’s unforgiving wit worked for me, and I found the vast majority of the stories enjoyable to read. However, on occasions (in particular the opening story, ‘Jezebel’) I felt he didn’t quite pull off what he seemed to be aiming for; the satire perhaps went too far, so that it was no longer funny, but slightly uncomfortable.

This aside, the collection as a whole is wonderful, and it is clear why Żahra’s writing is cherished in Malta. In Vassallo’s carefully rendered translation, English readers can finally encounter his wit and knack for telling great stories too.