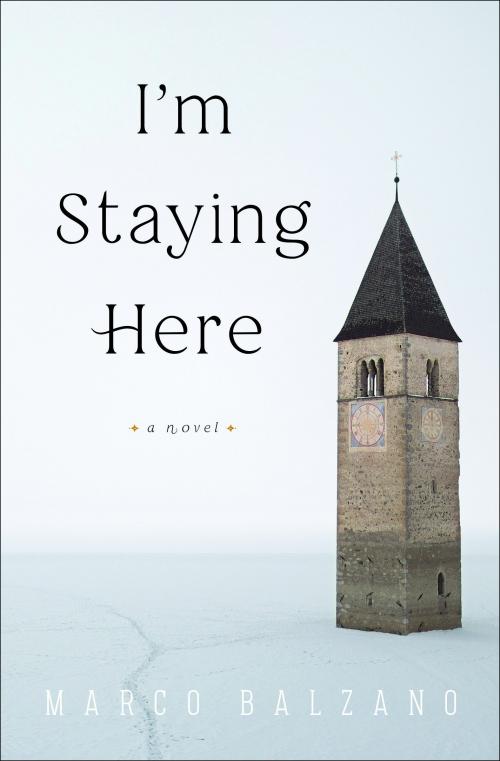 Nestled on the banks of the Adige River near the meeting point of Switzerland, Austria, and Italy, is the village of Curon. Part of an autonomous Italian province in the northern mountains, this small community of German-speaking farmers has always been tight-knit; however, this all changed when Mussolini became prime minister of Italy in 1922 and his fascist rule saw the area flooded with carabinieri, and Italian become the rigidly enforced language. The village divides into those who conform and those who don’t.

Years later, when Hitler and his Nazi regime gain power, the villagers are further divided, between those who stay, and those who leave for the nearby German-speaking countries.

I’m Staying Here was my introduction to this part of Italy and its fascinating and devastating history. As Balzano writes in his author’s note, while the novel’s characters and their stories are fictional, what happened in the small village of Curon is very real. But fascism and war are not the only things threatening this community: the construction of a dam that would flood the village and force out its inhabitants looms over the the novel.

Curon’s story is told by a woman who stays despite everything. We read of Trina’s life in Curon as she writes to her daughter, Marica, who has fled to Austria with her aunt and uncle when it was annexed by Germany and Mussolini’s power in Italy was at its height. Trina tells Marica of life before she was born, of how the Italian language was enforced, and of how Trina and her friends – recently qualified teachers – gave clandestine German classes in attics and barns. Language holds a very important place throughout the story, with Balzano drawing on the idea of language as a weapon, but also as a form of revolt and defiance.

Trina goes on to tell her daughter of her marriage to Erich (Marica’s father), of her and her brother’s births, and of the years of strife the family faced under Mussolini. But when we reach the point at which Marica disappears with her aunt and uncle, we see a shift in Trina’s character. Up to this point she has proved to be strong and defiant, fighting for what she thinks is right even if it put her life at risk. However, with Marica’s disappearance, Trina becomes extremely inward, fighting her own emotions in order to remain strong. Her passion fades, and she becomes incredibly stoic. In fact, Erich and Trina find it so difficult to express their emotions regarding Marica, that the pair vow never to mention her again. But while Marica is erased from their day-to-day conversations, her absence plagues the novel, and like Trina, we wonder if and when we may see her again.

As the novel progresses, war begins to impact the village in a variety of ways, but language remains the key weapon. Trina notes that ‘languages had become racial markers. The dictators had turned them into weapons and declarations of war’. However, while Balzano makes this idea of language as a weapon very clear throughout the novel, it never consumes the story.

What does keep us turning the pages are the stories of Marica’s absence and the dam construction. Balzano gives readers tiny facts and titbits about the works on the dam, as well as occasional musings on Marica’s whereabouts, cleverly offering readers delicate threads of stories yet never allowing us to fully indulge in the details of the two most powerful storylines which form the greatest weight of the book.

I’m Staying Here is a fascinating glimpse into life in Curon, and a beautifully and expertly written novel of division and loss. Most of all though, it’s about resilience, as after all, throughout everything, Trina stays.

Alice Banks is a literary translator from French and Spanish into English, based in Madrid. She is currently translating Ali Zamir’s Dérangé que je suis, and also works for Fum d’Estampa Press. Alice is assistant editor at the European Literature Network.

Read Alice Banks’ #RivetingReview of AMONG THE HEDGES by Sara Mesa