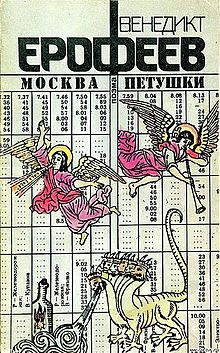 A pseudo-autobiographical postmodernist poem in prose, this describes the entire drama of being a Soviet intellectual – in drunken conversations and reflections on board a suburban Moscow train.

(also published in English as Moscow to the End of the Line, Moscow Stations and Moscow Circles)