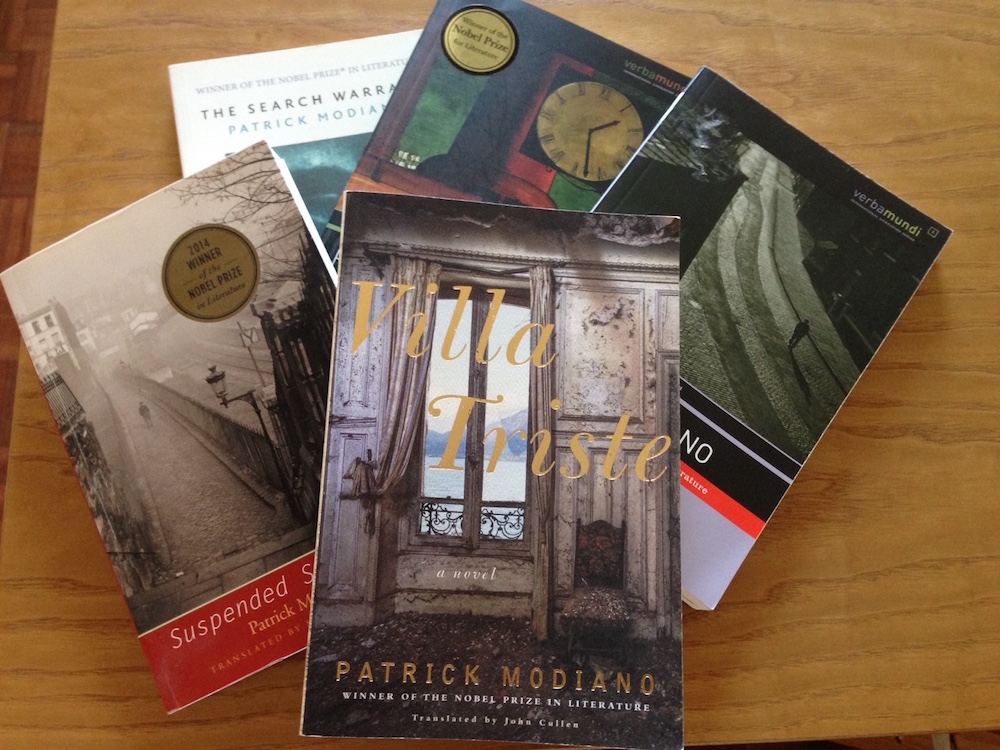 While Patrick Modiano is author of some thirty works of fiction, before 2014, only a few of these were available in English. That year, however, he won the Nobel Prize in Literature. Since then it has been as if the doors to his work have been opened to the English-speaking world. To put this even more figuratively – the doors to the house his work occupies have been unbarred. I use the metaphor of a physical space intentionally; for it seems to me that Modiano’s work is much more about creating a narrative space than it is, for example, about following the path of a story.

The publication this spring of Villa Triste perfectly sums up both how English speakers are now gaining access to this narrative space, and the nature of the space itself.

Modiano’s fourth novel, Villa Triste was first published in 1975, so it has taken more than four decades for it to appear in English translation. Now that we can, to read this book is to enter a particular state of mind, a particular mode of thinking and a particular atmosphere which Patrick Modiano has made his own. For while Villa Triste is a specific house, it is also the space the text inhabits. Towards the end of the novel, the protagonist, Victor Chmara, describes this house – a middle-class villa in a tired lakeside resort town in the Haute-Savoie area of France:

“…at first I thought the adjective ‘triste’ unsuited to the place. Eventually, though, I realized Meinthe [the owner] had been right, provided you could detect something dulcet and crystalline in the sonority of the word. Upon crossing the villa’s threshold, you were pervaded by a limpid melancholy. You entered a zone of calm and silence. The air was lighter. You floated.”

Around the time of Modiano’s Nobel win, I wrote a long feature piece for 3:AM magazine about his work. In preparation I feasted on what translations were available and fell under Modiano’s spell. Nearly two years later, once again picking up a Modiano novel, I felt exactly as Victor Chmara describes. I was pervaded by a “limpid melancholy”; I was entering a “zone of calm and silence”. For the couple of days the air did feel lighter. I did float.

Do I exaggerate? No. Just as a reader can become wrapped up in the thrill of a brilliantly constructed plot, or befriends a compelling character, so I am enchanted, moved, almost possessed when I enter the serene, “crystalline” sadness of Modiano’s world.

The plot of Villa Triste is slight. Victor Chmara is an eighteen-year-old who, in order to escape being drafted to fight in the Algerian War of Independence, has moved to a quiet, bourgeois holiday resort in the French Alps. There he meets an odd couple: the glamourous starlet Yvonne, and her secretive but outrageous gay friend, René Meinthe. Victor falls for Yvonne, and is intrigued by Meinthe. The three spend a few summer weeks lunching, dining and mingling with the town’s tourists. There are some key novelistic moments, but little else in terms of action seems to occur.

The key to this novel, then, is not the action, but everything around it. Victor is itinerant. Jewish, he is haunted by the experiences of his parents’ generation; by statelessness and impermanence; and by the “lingeringing scent of Nansen passports” (the travel documents the League of Nations issued to stateless refugees from the 1920s onwards).

Yvonne and Meinthe, while natives of the town, have been away from it, apparently on glamourous adventures, and have only recently returned. Victor craves the security and calmness of living somewhere so provincial, of being so deeply connected with a place. Yet at the same time he appreciates that both Yvonne and Meinthe are uncomfortable; and that there are unknowable secrets and scandals lying just below the polite surface the town presents.

A lesser writer might find himself focussing on these hidden riches – nothing makes plot like secret-revealing. But Modiano eschews such easy novelistic fodder. Instead, in the words of the Nobel committee, Modiano’s is “the art of memory with which he has evoked the most ungraspable human destinies”.

For memory is the most powerful dynamic in Villa Triste – as it is in all Modiano’s work. To return to my opening metaphor, and to borrow from Victor’s description of the villa, in the case of Modiano, invoking memory is like entering a house. Oftentimes the rooms are bare, just as memory is vague and inconsistent. Victor continues his description of the villa thus: “The furniture had no doubt been scattered abroad. All that remained were a heavy leather sofa whose armrests, I noticed, bore claw marks”. (Modiano doesn’t succumb to the temptation to explain these marks. They are present, is all: signs of some past incident.) In another room, significantly, is a map of French West Africa and an aerial view of Dakar. These, and the smell of the sofa, evoke for Victor a memory of his father, so that in his mind Villa Triste

“…was indissolubly linked to the ‘African Enterprise Corporation,’ three words that had lulled my childhood. I reentered the atmosphere of the office on Rue Lord-Byron and rediscovered the fragrance of leather, the half-light, my father’s interminable consultations with very elegant, silver-haired blacks … Was that the reason why, when Yvonne and I spent the night in the living room, I was sure that time had stopped for good?”

Memory is also key to Villa Triste’s framing device. Victor recalls those few weeks spent in a summer in the early 1960s from a time twelve or thirteen years later, in the mid-1970s. Right at the end of the book we discover that he is prompted to do so by an incident (which I will not reveal) he reads about in a Paris newspaper. He imagines Meinthe walking the streets of the dreary, out-of-season town, entering bars late at night in a bid to obtain his favourite tipple – a glass of “light port”.

Master craftsman that he is, Modiano, in the opening chapter of the book, signposts this flashback through his use of the second person: “you feel like you’re walking in a ghost town” he states, “you pass shop windows – the Chez Clément Marot bookstore, Horowitz the jeweler’s […] you can see the red and green neon light of the Cintra shining at the end on your left”. But is he addressing Meinthe, or the reader?

This ambiguity works. As I begin Villa Triste the novel, I enter the narrative frame of Victor in Paris in the mid-seventies, just as he attempts to inhabit Meinthe’s perspective on a particular winter’s night, and then enters his memory of the town in the early sixties.

More importantly, however, I find myself reentering the narrative space I left two years ago after reading six Modiano novels. That space is about memory, and its attempts, as Victor says, to stop time “for good”; to preserve it, in order that it can be grasped and understood.

For, beyond the seemingly insignificant incidents detailed in Villa Triste, is a seismic event: the Algerian War, the reverberations of which inevitably reach the small town. France in the 1970s, when Modiano first published Villa Triste, was only a decade past its painful and bloody dislocation from its former colony. In Dora Bruder and his trilogies Suspended Sentences and La Place de l’Étoile/The Night Watch/Ring Roads, Modiano reaches back through memory to explore the long-term effects of the Nazi Occupation of France. Similarly, in Villa Triste, he attempts, in his distinctively quiet way, to wrangle with another big national question.

What is remarkable is that forty years later, in another country, and reading in another language, I feel some of the immediacy and pain caused by that struggle.

Modiano’s real genius, however, is that he not only explores historic events in such an idiosyncratic and personal way, but that he studies memory itself. To be an observer of that study – to have the privilege to enter the house in which it takes place – is an enormous literary pleasure.

Published by Other Press, 2016