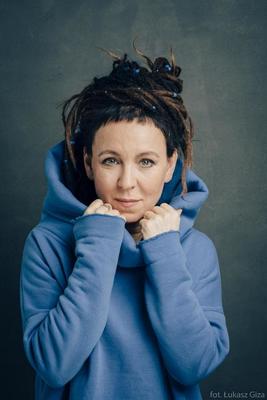 Drive Your Plow Through the Bones of the Dead is hotly anticipated and is published for the first time in English translation by Antonia Lloyd-Jones this year, by Fitzcarraldo Editions:

Retired civil engineer Duszejko lives a secluded life in a mountain village close to the border between Poland and the Czech Republic. She is charismatic and eccentric, a passionate astrologer and a strict vegetarian. One day her beloved dogs disappear. On a snowy winter’s night shortly afterwards she discovers the dead body of her neighbour and, next to it, deer tracks. More men die in a similarly mysterious way. All of them were pillars of the village community, and all were passionate hunters. Were these men killed by wild animals? Or has someone been provoked to pursue a bloody vendetta? At some point Duszejko herself comes under suspicion…

Join author Olga Tokarczuk for a Q&A about her latest novel, Drive Your Plow Over the Bones of the Dead, following a rare screening of Spoor, the 2017 film adaptation of the book by acclaimed director Agnieszka Holland (Europa, Europa) and starring Tomasz Kot (Cold War).

Polish phenomenon Olga Tokarczuk, Winner of the 2018 MAN Booker International Prize for Literature, joins the festival to discuss her latest novel Drive Your Plow Over the Bones of the Dead and what motivates and informs her writing. Attending the event also will be the book’s translator, Antonia Lloyd-Jones.

With Drive Your Plow Over the Bones of the Dead, Tokarczuk returns with a subversion of the noir novel and the magical realist genre. By no means a conventional crime story, this entertaining novel by ‘one of Europe’s major humanist writers’ (Guardian) offers some thought-provoking ideas on our perceptions of madness, social injustice against people who are marginalised, animal rights, the hypocrisy of traditional religion, and belief in predestination.

Olga Tokarczuk will be in conversation with Kasia Boddy.

Enter the world of a sleuth with a passion for animals, astrology and William Blake at the launch of Drive Your Plow Over the Bones of the Dead.

Olga Tokarczuk speaks about her latest novel, which subverts noir and magical realism, her life as one of Poland’s most beloved authors, and her experience of winning the 2018 Man Booker International Prize.

Drive Your Plow Over the Bones of the Dead, Tokarczuk’s fourth book to be published in English, challenges our perceptions of madness, old age and animal rights, and caused a political uproar when it was published in Poland.
All events have been organised by Fitzcarraldo Editions and supported by the Polish Cultural Institute in London.