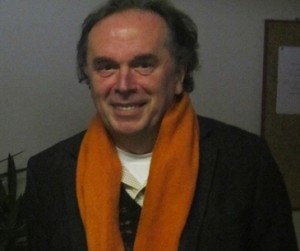 Novels without fictions by Jürgen Ritte

As the French writer Patrick Deville occasionally muses his stories are basically “novels without fictions”. Deville is the author of brilliant continental investigations, reportages, historical novels, there is no real conception of his genre. One example of such a ‘novel without fiction’ is his Equatoria (2009, a cultural-historical and political portrait of Africa and its colonizers). Although Patrick Deville may not be represented in this rentrée (and this brings to mind Ricco Bilger’s recently released German translation of Deville’s hitherto much underrated novel Kamupchéa, a magnificent journey through time across East Asia), he seems to have supplied the key word. Rarely have French writers quit the world of fiction in such numbers, and with such appetite for narrating stories, to tough it out in the realms of pure facts.

Delphine de Vigan’s work D’après une histoire vraie (Inspired from a true story) appears to set a trend here. After the surprise success of Rien ne s’oppose à la nuit (Nothing Holds Back the Night, translated by George Miller 2013), a novel that already left behind pure fiction too, the writer grappled with the pressures of fame. She now recounts this ‘true story’ – but how true is it? Perhaps, autofiction or autobio fiction are appropriate words – in this genre, of course, Christine Angot is relevant again (Un amour impossible/An impossible love). She has the eternally recurring same story (mother doesn’t notice that daughter, i.e. Angot, was abused by father) and her eternally same style – “as dry and unenjoyable as a zwieback on a cruise ship” (“Le Canard enchaîné”, the satirical weekly) – but in the case of Philippe Jaenada things are entirely different.

In La petite femelle (The little female), he tells the tragic story of Pauline Dubuisson both grippingly and also keeping his distance. In 1953, Dubuisson was sentenced to death in France for the murder of her lover; she was treated as Messalina, as a ‘femme fatale’, by a sensation-seeking and misogynous press. French cinema had already taken an interest in the material: in Henri-Georges Clouzot’s film “La Vérité” (“The Truth”), Brigitte Bardot plays the character of Pauline Dubuisson. When she was fourteen Pauline already had a relationship with a German navy marine during the German occupation of her native Brittany. Later in Dunkirk she was a German military doctor’s lover – he was decades older than her. After the liberation came the all too familiar scenario: a furious mob pulls her onto the street, rips off her clothes, shaves her head, tattoos her body with swastikas – and she only narrowly escapes the lynch mob. Jaenada allows justice for the fate of this woman, and in doing so he also illustrates the atmosphere in post-war France. French critics call this genre ‘exofiction’ where writers assume real-life destinies.

In Eva, Simon Liberati conjures up another woman’s fate both as a victim and unattainable object of desire. The subject is the real Eva Ionesco, who even as a young child was fixed up by her mother as an erotic photo object, and after much erring and straying in the Parisian nightclub jungle at some point landed in the arms of the writer who worshipped her. A danger of this genre is naturally that one or the other individual may feel his or her personal rights infringed upon. So Eva’s mother then also turned up and was asked to appear in court but was dismissed. This kind of frustration should be spared with Belgian writer Patrick Roegiers, even if he gets dangerously close to a holy cow. In his thrilling narrative,  L’Autre Simenon (The Other Simenon) we make the acquaintance of the embarrassing brother of big Georges. His name was Christian, and he was a member of the Rexist government, the Belgian version of the fascists, and Nazi collaborators. In 1945 after the liberation he was condemned to death because of his participation in shooting 27 hostages (including the town priest in Charleroi). He fled to France and found sanctuary in the Foreign Legion; he was killed several years later in Indochina. An addendum to this episode from Europe’s dark past was that over a twelve-year period Christian’s granddaughter Geneviève, a doctor, faced prosecution in a Brussels court for of the murder of her partner. As ‘explanation’ of her deed she cited, among others, that her great-uncle Georges Simenon was guilty of everything and that all the bad influence in the family originated from him. True, the inventor of Inspector Maigret always tried to flee the irritating shadow of the past and carefully covered the tracks of his early years…

Xavier Mauméjean’s fantasy Kafka à Paris seems more harmless in its bid to tease out something – with extremely dubious results – from the meagre evidence of Max Brod’s and Franz Kafka’s Parisian journey in September 1911. A bulky illustrated volume by Hartmut Binder with exhaustive material on this topic has been around for a number of years and this offers enough information for dreams and speculation. Yasmina Khadra (La dernière nuit du Raïs/Dictator’s Last Night) and Bernard Chambaz (Vladimir Vladimirovitch) focus on the truly big, yet also disproportionately more dangerous fish. Khadra spends the last nights inside the brain of the Libyan dictator Muammar Gaddafi and serves up, with exquisite skill, a multifaceted distillate from the life and thought of the revolutionary leader. Chambaz dares to tackle Putin – and the subject of Russia in general, perhaps a programme that is too vast.

For the genre ‘novels without fictions’ or ‘exofictions’, if you must, Laurent Binet takes the biscuit with La septième fonction du langage (The Seventh Function of Language). The title, an allusion to a famous essay by the great linguist Roman Jakobson, sounds like an album from the classic French comic hero Blake & Mortimer. The two heroes, a bourgeois inspector – think: a cheap version of the brilliant MI6 officer Blake – and a PhD scholar and semiologist – think: pocket book edition of the Oxbridge Professor Mortimer – investigate the death of Roland Barthes in the French intellectual milieu of the early 1980s. They all feature – Foucault, Derrida, Althusser, Kristéva… – even politicians like President Giscard d’Estaing and President-in-waiting François Mitterrand… Barthes didn’t just collide by accident with a laundry van on 25 February 1980, but he was deliberately run over! And this is about the only fiction, the intentionality of the ‘accident’, which Binet grants himself. The rest is vouched for in one or the other form. That the entire episode becomes supreme fun is because Binet, as a teachable pupil of semiology, has first learned to read and lay tracks (and therefore he can write a crime thriller), and on the other hand presents all of the acting characters in their sign functions, as ciphers, even as labels, as we perceive them in today’s intellectual landscape, not as psychologically complex characters. They are characters of an intelligent comic in which the familiar figures of Dupond und Dupont from Tim and Struppi appear with their umbrellas and disguised as Bulgarian killers.

This rentrée has a wealth of highlights in store: Mathias Enard’s confrontation of the real Orient with the Orient of our dreams in Boussole is splendid and masterful. It is a veritable journey through the sleepless night of a Viennese musician and oriental music expert. It allows places and encounters to march past the reader in an eminently present Orient. A good read and original, as always, is Diane Meurs’s research into the wide-branching genealogical tree of German-Jewish enlightenment thinker Moses Mendelssohn (La carte des Mendelssohn). Sorj Chalandon’s gripping, touching and burlesque tragicomedy Profession du père is especially noteworthy. According to the writer this work teeters on the threshold between ‘res factae’ and ‘res fictae’ and is motivated by facts and fictions, thus opening up the intermediate realm. Set in the 1960s this is the story of a terrible domestic tyrant, who at times claims to have been a companion and friend of Charles de Gaulles, at times a CIA agent and guerrilla fighter with the terror organization OAS against Algerian independence, at other times the father of the French currency reform and then again, a parachutist and maybe even the writer’s father… French history and French narratives – the one reflected in the other – Chalandon also narrates the history of emancipation from the narratives – and from the father’s story! And as so often in this extremely productive autumn the focus is on narrating history to control, understand and tame it.

And taming history can be an undertaking with a definite outcome: Boualem Sansal, Peace Prize Laureate of the German Book Trade in 2011, comes up with a dark extrapolation of the present, a negative utopia, which already reveals its source of inspiration on the book cover: 2084. This simple title is understood as a variation on Orwell’s 1984. Its contents spread the horror vision of a totalitarian Islam (here, admittedly still in a fictional North African state) where the people have all voluntarily submitted to all the absurd bans on thinking and thought commandments. This is depressingly close to the present – and will rank the writer, who is a supremely courageous contemporary, a few places higher on the black list of the murderous zealots…

This blog was originally published on ELit Literature House Europe on 19 October 2015.