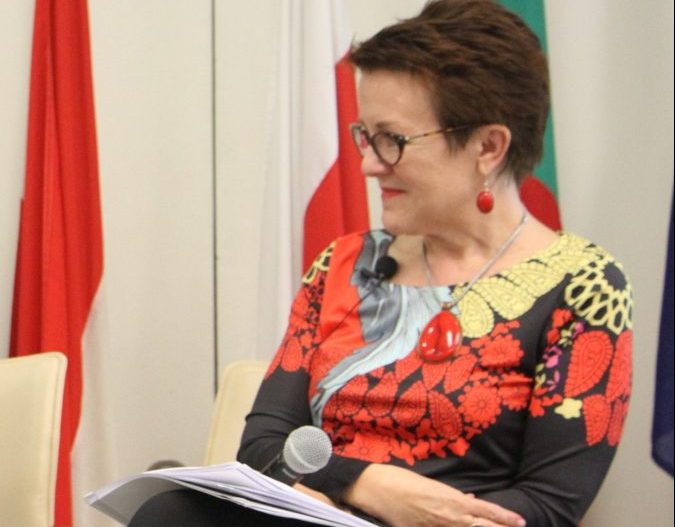 ELNet May 2016 Newsletter by Rosie Goldsmith

For European Literature (EL) lovers, the month of May is the equivalent of Christmas, Hanukkah or Eid – it’s the festive highlight of our year when we celebrate our year-round efforts to publish and promote our beloved EL. Time to polish the champagne glasses (Boyd Tonkin), buy a new T-shirt (Daniel Hahn) and get out those red shoes (Rosie Goldsmith). This May we have an embarrassment of international literary riches: our first ever European Literature Festival and the first ever annual Man Booker International Prize (MBI) in conjunction with the Independent Foreign Fiction Prize (IFFP: RIP).

Eight years ago we had a dream, that we could gather together the best writers from the rest of Europe to London for a one-night-only special event. It had never been done before. Thanks to the mass collaboration of sponsors and partners, our dream became reality. The event became European Literature Night (ELN), initiated by EUNIC London, the Czech Centre and the British Library, and taking place in London and cities all over the continent. Over these eight years our ELN evening has become a week, then a month and this May it is the showcase event in our first European Literature Festival (ELF), embracing more than 30 countries, 60 writers and including poetry, graphic novels, literary fiction, non-fiction, crime thrillers and translation workshops. This year we also have some real British celebrities to boost the brand – Kate Mosse, Mark Lawson and Ian McMillan – and not just cut-price slebs like me and Danny Hahn. EL in the UK has itself become a celebrity. Next year maybe the cover of Vogue? Although we’ll have to do something about our acronyms.

As chair of the judges, Director of European Literature Network (ELNet) and host of ELN (keep up!), May is my personal merriest, busiest month. And I can guarantee that we have pulled it off again: the best of contemporary European literature (ok, EL!) is coming your way. British Library, Wednesday 11th May. Our six ‘winning’ writers are all literary celebrities ‘back home,’ magnificently translated and selected by us from a pool of sixty-five European writers submitted by publishers and cultural organisations last November. Joining me on stage will be: Burhan Sönmez (Turkey), Dorthe Nors (Denmark), Gabriela Babnik (Slovenia), Peter Verhelst (Belgium), Jaap Robben (Netherlands) and Alek Popov (Bulgaria). They are all outstanding – unique, original, mind-expanding and fun. I love ELN and my two hours on stage, vicariously bathing in the reflected glory of our stars, conducting the equivalent of a BBC Live broadcast. (British Broadcasting Corporation!)

As our ELF Publicity promises: The discussion will travel from the Turkish prison cells of Burhan Sönmez’s ‘Istanbul, Istanbul’ to the turned upside-down-lives in Dorthe Nors’ twisted and imaginatively-realised streets of Copenhagen; to Slovenian writer Gabriela Babnik’s seductive tale of forbidden love on the dusty plains of Ouagadougou, Burkina Faso; via Peter Verhelst’s deadpan Belgian humour in his Gorilla-narrated fable about the story of human civilisation (and its collapse). There is a tormented relationship unfolding between widow and son on Dutch-writer Jaap Robben’s remote and stormy island (located somewhere between Scotland and Norway); and we finish in Alek Popov’s strange and comic novel that moves between Bulgaria and New York, where two brothers question whether their long-deceased father is, in fact, dead.


As our ELF superstar-host Kate Mosse says: At a time when the countless shared histories and stories from our many friends and strangers in Europe are danger of being lost in the politics of the EU debate, an initiative like the European Literature Festival is more important than ever. Who needs supermodel Kate Moss on a Vogue cover when you have superstar novelist Kate Mosse?

And here we are, at the heart of the matter, ‘the EU debate”, aka our looming EU referendum in the UK. Were you at our ‘Culture Matters: Euro Stars’ debate on April 27th at Europe House in London? The idea emerged out of my passion for culture, literature and Europe, boosted by fresh grants from Arts Council England (ACE) and Creative Europe via Literaturhaus Europe (ELIT) and by my anger over the current culture-free EU referendum discourse in the UK. This is an historical and life-changing decision for our country and culture should matter as much as politics and economics. The event was packed and passionate. I had invited five of my favourite European writers and thinkers – who also happen to be some of the most influential and brilliant – to discuss the importance of arts, literature, history and language (or however they interpret ‘culture’) in the context of this current crisis across Europe. A. L. Kennedy was there, the prize-winning Scottish author and broadcaster, launching her new novel Serious Sweet; the Hungarian novelist and EUPL-winner Noémi Szécsi, author of the wonderful Finno-Ugrian Vampire; Geert Mak, historian, essayist, Dutch ‘national treasure’ and author of the 2004 seminal study of Europe post-1989, In Europe; the Italian crime writer, former Senator and anti-mafia judge, Gianrico Carofiglio, who launched his fifth Guido Guerrieri novel in English, A Fine Line, and finally, my former BBC colleague, the English journalist and historian, Misha Glenny, whose early books The Fall of Yugoslavia, The Balkans and The Rebirth of History informed my early years at the BBC and still do.

So a perfect line-up of Great Europeans discussing the EU and EL, and providing a curtain-raiser to May’s ELF and ELN. If you weren’t able to attend the ‘Culture Matters: Euro Stars’ debate you’ll be able to watch the video on our website after May 6th.