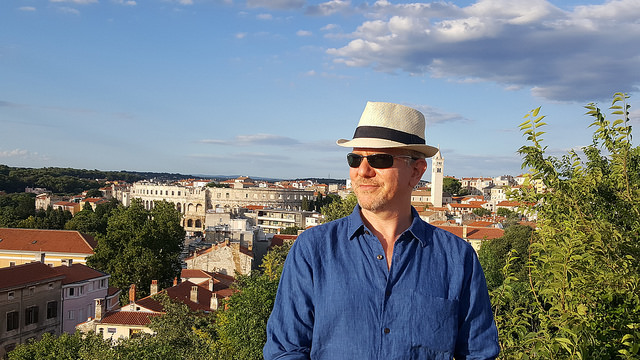 The curation of a festival of literature naturally entails the “curation” of its participants. Lit Link excelled in this regard – the authors invited from the UK represented a very fine, accomplished tranche of contemporary British writing, and the publishers, for the most part, represented a scrappy, independent ethos and pride in advancing thought-provoking fiction and literary fiction in translation.

The Croatian writers chosen to read their work, meanwhile, exhibited a predilection for bold, frank, challenging, experimental material. Their writing seemed utterly of our time – that is to say, fresh and relevant, but also embodying a certain melancholy, a quiet angst that perhaps reflects the uneasiness of the contemporary Balkan state. This disquietude was intimated in several conversations with the various Croatian writers on the tour, and could be sensed behind certain facts about the country that were offered – such as the population drain that some argued was taking place as a result of the shortage of jobs, with a figure of 50,000 migrants to other EU countries over the past few months alone from one city. (Other facts were anchored more obviously in the country’s recent history, such as the revelation that Rijeka was the only city that had never elected a leader from amongst the nationalist right, and the impending change of heart over the currently named “Marshal Tito Square” in Zagreb.)

And yet, which country amongst us is immune today from a general sense of unease and glumness about the direction of politics, civil society, literature? Certainly, the ostensible theme of the Lit Link tour – “Despite Brexit” – pointed to the UK’s own complete turmoil, and it was presumed that the subject need not even be broached directly as part of the trip, rendering the theme ironic. No one complained. (More than one Croatian writer expressed a surreal dismay about Brexit, having once looked to Britain as a bastion of opportunity and freedom from the vantage point of their own, then-isolated country, and now having that equation virtually reversed in many ways.)

Needless to say – perhaps because we participants were so effusive about it during and immediately after the tour – the hospitality, conviviality and generosity displayed by the Croatian organisers and contributors was impeccable. Daytimes afforded ample space in which to get to know most everyone personally and professionally (not always easily done on such trips), to exchange views and to obtain a good frame of reference for the three cities visited and points in between. Highlights included learning about fellowship programmes, support for translation, the scarcity of literary agents, the earning potential for writers in Croatia, certain untranslated “greats” and even the lack of any firm distinction between “fiction” and “non-fiction” in Croatian literature.

Evenings were given over to the readings in highly compelling venues, and the parties afterward were no less stimulating in their way. Robert and Ivan formed an almost comically balanced partnership, and the result was an unrushed yet well-timed, well-planned tour over a considerable distance with attendant logistics.

The value of such trips for foreign publishers, I have long felt, lies not in the expectation that we shall return to Britain and immediately and automatically begin commissioning and translating titles from the country in question (although that can and does happen). Rather, having made a serious acquaintance with the literary culture and context of a place, having met with writers, publishers and translators and opened several channels of dialogue, having acquired a feeling for the nuances of the place and its language, we are fortified with an appreciation that informs all future encounters or opportunities with work and people from the host country. Having absorbed it all, recognition will thus be immediate at the next turn, and good work will often ensue (even if unrelated directly to publishing activity – these trips are an excellent means of extending “soft power”). Another benefit, Europe being what it is, is that recognition often spills over tangentially: familiarity with Lithuania ties into encounters with Polish culture, for example, as familiarity with Croatia can help establish a feeling for Serbia.

The Lit Link festival, coming up on half a dozen years of operation, has undoubtedly supported Croatian writers and writing in ways that are otherwise unavailable. It is not difficult to discern the benefits to foreign publishers and writers, either – and that brings us back to the care taken in curation and execution.

Read more about LitLink: Despite Brexit by Rosie Goldsmith.

Mitch Albert is the Publisher and Commissioning Editor of Periscope, an imprint founded in 2015 for international literary fiction and non-fiction. He was the first Programme Director of Writers’ Centre Norwich, and was formerly Editorial Director of PEN International, where he relaunched the organisation’s eponymous literary journal and helped coordinate the ‘Free the Word!’ literature festival. Born and raised in Montreal, corrupted in New York and resident of London for the past eighteen years, he is a proud citizen of Europe.