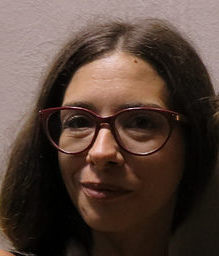 In March, my husband gets up at five in the morning. He brushes his teeth, washes his face, puts on a pair of jeans, a hoodie, a brown corduroy jacket and a pair of trainers, kisses me and takes the bus to a nearby island. At the beginning of his forty-minute ride, he bids his fellow passengers a:

Every morning, when he arrives on the island, he pulls on a pair of rubber trousers reaching up to his belly. They are braced, bright yellow trousers. You are my sunshine, is what I say to him in the morning. He puts on the Wellingtons which he has brought from home. He walks into the semi-open hangar and strews salt and pours brine on anchovies and sardines. This he does with his gloves off, for small fish are delicate, they break easily. In the semi-open hangar, spring mornings are chilly. It’s quite cold, darling, is what he says to me.

The fish arrives in big plastic buckets. It’s salted fresh only. It’s salted whole, after it’s been drained of blood. It’s salted with koshering sea salt. It’s salted till October. My husband lines them up neatly, fishy after fishy next to fishy, puts salt between them, pours brine over them, lids them up then puts weights on the lid. Sardines are oilier, and the white crates in which they are kept soon turn brown with oil.

Every night, round seven, my husband sits in the tub, in a magnolia-scented bath, and rubs his fingers with lemon. After that he bends his knees, puts his head on the edge of the tub and takes a kip. Later, when we make love, he doesn’t touch me with his brown palms. He rests his elbows on the pillow and kisses me with his cracked lips, his palms facing upwards. We don’t breathe. Our bed is like a ship in a ship breaking yard, such are his cries, such are his snarls when we make love. It is almost morning, my husband whispers and sinks into sleep. He can’t stretch his legs in the bed, the wooden footboard gets in the way. I lie like a closed oyster, light and firm. Sleepless, I stare through the crack in my shell at his neck where wrinkles form a pattern like those on a sock. We never switch sides.

The hangar is like a tiger, he says, that sea is its swimming pool.

Sometimes I hear him whimpering in his sleep when he’s having a nightmare. In his dream, he slips into the mouth of the tiger, lands on the beast’s wet tongue, in his jeans and hoodie, and he can’t get up no matter what, nobody hears him, nobody reaches out their hand, everyone just keeps working in silence, and he’s wriggling and I don’t know if I should wake him up and tell him it’s all just a dream. I don’t know, I’m not sure.

He is so beautiful when he sleeps. If I were a big woman, I would sit on him with all my weight and strangle him like a two-day old kitten.

In the morning I bid him a G’mornin’.

My husband is burly, and when he walks, it’s as if his steps are yawning. He stumbles over me as if over a pet. I sometimes hide behind a tree and wait for him to turn around. Or leave. If we’re going to a birthday party, I’m the one who wraps and carries the present. If he’s had a lot of wine, the room takes on a smell which makes me put on my shoes and walk up and down the street. If we don’t go out, he washes up and rubs his fingers with coffee dregs, and divines. He says great beasts will devour us on a safari.

The fish arrives in big plastic buckets. It’s salted fresh only. It’s salted whole, after it’s been drained of blood. It’s salted with koshering sea salt. It’s salted till October. My husband lines them up neatly, fishy after fishy next to fishy, puts salt between them, pours brine over them, lids them up then puts weights on the lid.

Today, instead of the Wellingtons, he took his blue flip-flops to work. In the morning he said, I’m taking my blue flip-flops. He slipped in the hangar, fell, wallowed in the brine and laughed. When he got up, he salted everything that needed salting. Lidded it up and placed the weights. He took his big rubber trousers out in the sun, hosed them down and lit up a cigarette. On his ride home, no one would sit next to him. As if the others smell nicer, he texted me.

I didn’t reply. Tonight I’ll paint my face white and my lips black to make it easier for him to read them.

He came home at five in the afternoon, the sun was already down, our feet were already swollen. We ate some potatoes and two chicken drumsticks each. Two coffee cups were left in the sink, unwashed. I took him to the beach, we slowly stepped into the shallows, till the sea reached my breasts. He started swimming, swam a circle round me, then turned on his back, stuck his white belly out and stopped moving. I took him into my arms and carried him across the sea, between the land and the offing. Away from the island. He hugged me, laughed, brought his large feet together and splashed on the surface. With his flowing hair and gleaming skin, he looked like a merman. It is almost autumn, he whispered.

Tea Tulić was born in Rijeka in 1978. Her work was published in various Croatian, Serbian, Macedonian and Slovenian literature magazines including McSweeney’s from San Francisco. In 2011, she won the ‘Prozak’, an award for best young author’s manuscript, which resulted in publication of her first book, a fragmentary novel Kosa posvuda (“Hair Everywhere”). The Croatian Ministry of Culture awarded it as one of the best prose books in 2011. Hair Everywhere has been published in the UK, Italy, Macedonia and Serbia. In 2014 in cooperation with the musical collective Japanese Prime Ministers, she published a spoken word album Albumče on Bandcamp. She has recently published another novel Maksimum jata (“Flock’s Maximum”).

More on LitLink: Despite Brexit by Rosie Goldsmith