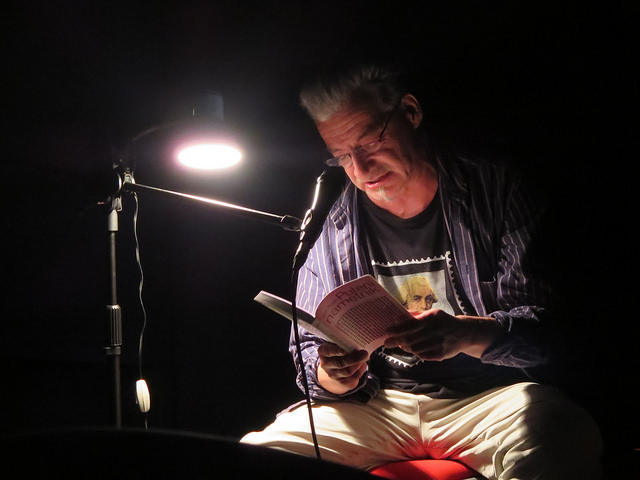 LitLink: From CARNAL PARASITE by Igor Rajki, translated by the author

It was twilight on a rainy autumn day when my friends Anja and Adalbert turned up unannounced, brushing droplets off their jacket sleeves (my father Mario had already stopped working as a demonologist at ASPIL; he was somewhere in the park, collecting bugs for breeding, while my mother was wiggling out of Martin’s tight embrace). Visibly stoned, they let themselves loose in my room. I put my guard up. Although our friendship was pointless, my friends were still quite capable of enticing me into new ways of thinking.

They certainly didn’t know I was already dead.

They were preoccupied with themselves: Adalbert had been fired from his job as a meditation coach because the “Leap in the dark” club was disbanded, while Anja, who was teaching elementary erotics in a private school, had recently received a paycut. I knew they were extremely egocentric, but I nevertheless feared they would notice my otherwordliness and spread it around, turning my death into a rumour, thus making it public, then boring – it would end up sharing the fate of similar manifestations: losing all credibility through wear and tear.

‘Ugh, it’s so dark and stuffy in here! Like a grave!’ said Anja, sitting down. She threw a glance at Adalbert, motioning him to roll a joint.

I didn’t want them to get suspicious, so I turned the light on, pulled back the curtains, slightly opened the window, switched on the radio, offered them a glass of wine, then got into bed. I had to simply give in to dying and renounce all malice, delusions, truths, lies, my career… Still, I was able to hear them. They were luring an idea.

‘Have you ever noticed,’ said Anja, ‘that you always lose things in threes? When I was little, I once lost my pencil, my eraser and a hairpin. Today I lost my umbrella, my car keys and a payment slip. Do you understand that principle?’

Adalbert and I exchanged looks. I sank deeper into the bed, refusing to participate further.

‘Yes,’ said Adalbert, ‘that’s true. When your first boyfriend left you, you lost your virginity, friendship and love.’

Anja sprang up from the chair, flushed with anger.

‘You are such a jerk, always bringing that up.’

‘Sit down and calm down,’ said Adalbert, drinking his wine.

Offended, she looked away. Then she sat down and said:

‘You are so cynical and weak, you never fight for anything. I don’t know what to do with you,’ said Anja and scratched her eyebrow. ‘And will somebody please change the music, it’s so funereal – she screamed and turned towards the speakers.’

Adalbert’s eyes searched mine. I ignored him and just kept looking at the edge of my cover. He offered her the joint. She inhaled.

‘We should go and live somewhere else. Here, everything has become so predictable. Nothing surprises me anymore,’ said Anja, exhaling smoke, and gave him back the joint.

‘We could go to South America,’ said Adalbert.

‘No way, not with all those snakes and poisonous spiders. Disgusting.’

‘Then let’s go to Northern Europe.’

‘Absolutely not. I’m freezing just thinking about it.’

‘What about a small tropical desert island?’

‘You can’t afford it. Stop daydreaming and start thinking about how we’re going to pay our heating bill.’

‘Here we go again. The human ostrich. You bury your head in sarcasm and wait till I get over reality.’

‘Are you even listening to yourself?’ asked Adalbert.

‘Of course. What else is there for me to do but listen to myself? I can’t hear anything nice from you. I’ll tell you what happened to me today. While I was going home from work, I ran into my ex-boyfriend.’

‘Hey! Don’t start with me! Give me back the joint.’

‘I thought I already mentioned it to you? Besides, I thought we could tell each other everything? Anyway, he barely looked at me. He just slipped a brochure into my pocket and went on his way. Here it is…’

Anja fished around in her bag, took out a worn out brochure and put it on the table, beside the ashtray. It was a miniature guide through consciousness, no bigger than the palm of your hand. Adalbert kept his cool. He stubbed out the joint and gulped down his wine.

‘You’re still thinking about him, aren’t you?’

‘You are so retrogressive! It’s unbelievable! To think that when I met you, I was sure you were the one and only man for me. You can talk with him about anything, I said to myself. Crappy toothpicks, deformed foetuses, an elephant’s scent… I thought we’d be able to share everything, but no! You stumble over the most banal things. Your thoughts are all focused on preserving your sense of self. Excuse me, I have to go to the bathroom.’

Adalbert shot me a brief, deliberate glance and started rolling another joint. ‘Women!’ he said and licked the paper. I nodded. The feeling of mutual understanding permeated the friendly silence – a silence so strong that it wasn’t disturbed even by the sudden racket somewhere in the apartment. We didn’t even notice when Anja came back.

‘What’s that noise?’ she asked, annoyed.

‘Seems like your folks are back. They’re doing some remodelling,’  said Adalbert.

‘Men! You still think about your parents. Of course, if you can’t become something yourselves, you talk about it!’

‘Come on, just sit down and stop babbling. Always with the same tone…’

‘Did you roll it yet? Oh, I love this song!’ she said and started dancing in front of the loudspeakers.

‘Go roll it yourself.’

He angrily threw everything on the desk covered with papers, turned white, got up and went to the bathroom.

We were alone now. Anja was sitting and rolling a joint.

I avoided looking at her. The most feminine lines of her body could jeopardize my deadness. She inhaled.

‘You see what I have to put up with? After seven years, I have no idea what I’m doing with him. Sometimes I don’t understand myself, like, at all. I can’t even accept my own opinion, I keep going astray. Just listen to the way I talk. I sound like like a commercial for anxiety. Maybe we really should go and live somewhere else? This is the land of endless adolescence. I feel unfinished! I just want to realize my potential and be fulfilled… And if I don’t recognize my own feeling, I become my own delusion. Of course I can’t understand myself! Besides, I could never leave him. I can’t stand the thought of talking about him to some future boyfriend like I talk to him about my ex. Would you please turn down the volume, I can’t hear us talk!’ she screamed and turned towards the loudspeakers.

Adalbert appeared in the room. His colour was back.

‘What took you so long? I have to sit here and talk bullshit while waiting for you. When you’re gone, I feel terribly uncomfortable.’

As their eyes met, they both sparkled.

They dove into each other with their gaze. Suddenly, their bodies entwined in an embrace. They were kissing and rolling on the floor, covering each other with gentle caresses. They were sighing quietly, deeply. I looked away. It reminded me of the fact that I was no longer alive.

‘We’ll have to be quiet, because of your mother.’

‘Scream stiflers,’ replied Adalbert, adding, ‘We’ll go out through the window. A bit of adventure, what do you say?’

‘Excellent. What a great idea.’

Anja finished her joint in silence, while Adalbert finished his wine.

I followed them out with my eyes, looking over the sheet. They climbed on the window sill, ducking their heads.

‘What’s this?’ asked Adalbert, one foot already on our neighbour’s balcony.

‘Nothing. Leave it.’ I said from the bed.

Those were my sketches of various crosses, the last remnants of life. A bed bug wriggled out of the window frame and scurried over the sketches, towards the wall. Anja automatically screamed, stamped on it and squashed it. I closed my eyes. It crackled delicately.

Friends are there only to remind you of the things you want to forget.

‘Give me your hand, you idiot! I could have slipped!’ I heared Anja shout from outside the window.

‘Stop yelling! Don’t yank on me so viciously! Let go of my leg!’ Adalbert was saying brusquely.

They jumped into the night, landed securely on the ground and walked away through the rain.

Igor Rajki (1965, Zagreb) is a productive author with a unique style leaning towards unconventional expression, experimenting, linguistic interplay and a peculiar sense of humour. He has published five novels, six short story collections, youth fiction, radio plays and dramas and his works have been performed on stage as well. Two of his novel, Truth Detector (2012) and Carnal Parasite (2014) were shortlisted for the most prominent Croatian award for novels, T-Portal Award.