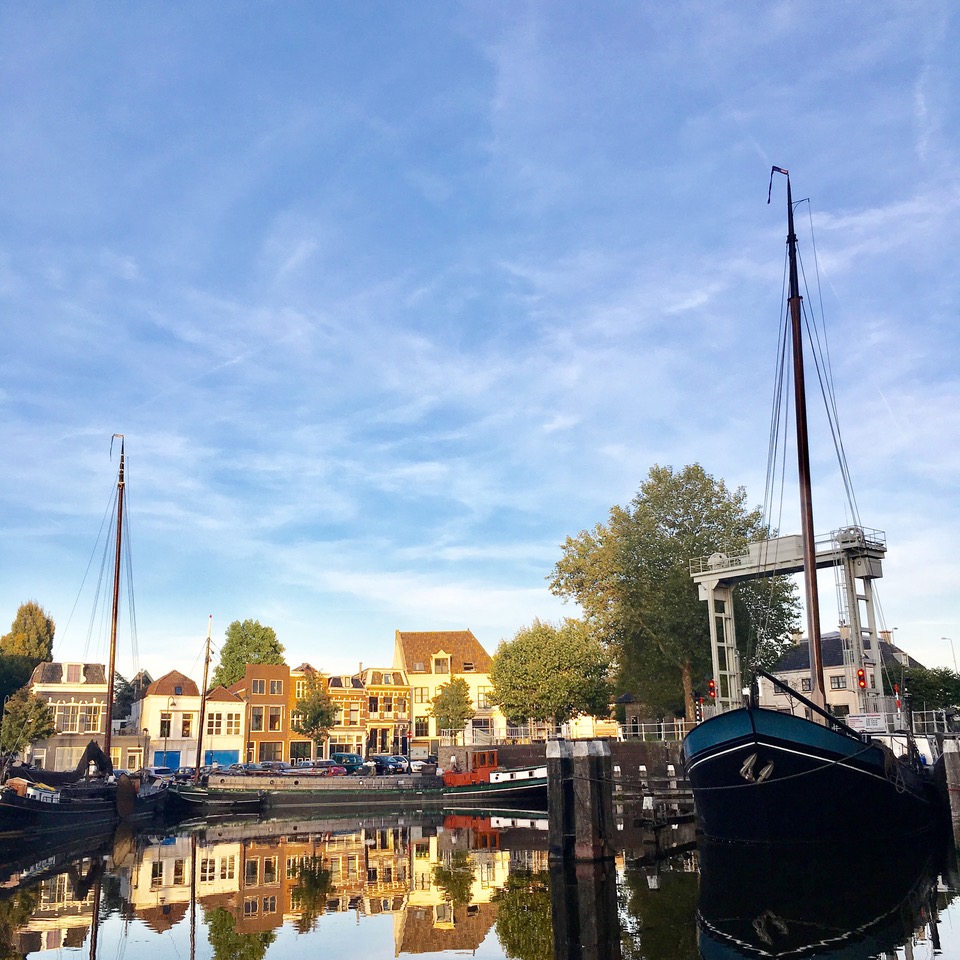 I said “hello”. Trying to act normal (define normal), trying not to feel a hypocritical self-satisfied kindness (define kindness), trying to silence my inner child screaming out this is not fair (define fair).

I was out with my daughter. It was a sunny day; one of those days when anyone who can throws themselves into parks, gardens, cafés, restaurants, lakes, boats, all sorts of alfresco places. Sasha was wagging his tail happily, Sasha, our neighbor’s dog we took for a long walk along the canal, a lovely thing he is.

We approached one of the countless bridges ornamenting the land and water of our Low Land. There, we saw them. Asylum seekers. I said “hello”. Some were smoking, some were looking at the sky, some at their phones. It was their first week on the boat, their temporary residence, they were on top out front.

The Gemeente had sent us a letter, home. That’s how I knew. It was the last month of last year. Beste bewoners, it started. Hoogachtend, it ended. I replied to it by post. I wrote, in my still-not-perfect-Dutch (define perfect), “It’s wonderful that you’re providing housing (if not a home, I thought, but did not write) for these people who have fled from terrifying conditions in their homeland (to which all of us, the privileged citizens of Western Europe had contributed willingly or not willingly, I thought, but did not write). I would love to help as a vrijwilliger. I speak Turkish, English, Dutch, some German and French. Anything I can do.”

But the letters kept coming. New letters. Letters containing detailed explanations of why our distinguished city was hosting this hotel boat (by government request). Letters encouraging us to contact the Gemeente with any inquiries (the boats will be guarded 24 hours per day, 7 days a week). Letters explaining why we should welcome the new visitors with open arms (they were not economic refugees; they had escaped their countries out of fear for their safety).

I knew from the letters that the hotel boat residents were all young men, 185 to be exact. I wondered how they’d spend a whole day on a boat.

Time passed. We were out walking again along the same route, the cheerful trio. I noticed several bikes parked in front of the boat. I thought these 185 young men wouldn’t be allowed to roam freely on the streets – for we in some lands imprison people who flee starvation, torture or death in their own countries the moment they land in our peaceful countries, we do this until we decide what to do with them, there are so many of them that naturally even our extremely efficient institutions cannot handle this number, things take time you know, and sometimes we end up sending them back to lands they once ran from risking their lives, lands where their lives are still at risk. But then I learnt from the latest letter that the local authorities were aiming to find activities that would help these 185 young men prepare for their future (define future), a “meaningful” future during their time on or off the boat.

A new letter explained that a second boat would replace the first boat because the first boat was needed for some other business. The letter said that the asylum seekers would be living on the hotel boat for at least another half year because the reception centres were extraordinarily busy and making decisions would take so much longer and temporary accommodation in our Low Land was full.

In the meantime, our newspapers reported that some asylum seekers were spending their nights sleeping in chairs instead of beds because there are not enough beds or rooms in the camp they enter up north, that first official step they must take to remain in our country. That I already knew: a few years ago, I met a young man whose parents sold their house in Aleppo to smuggle him out. He said he moved around six packed-out camps slash centres slash receptions until he was given a permanent place to live in Amsterdam. Five years of moving, five years of waiting, five years of sleepless nights spent on vertical or horizontal beds.

“Mama!” shouted my daughter, we were not far from the boat. I ran towards her and Sasha the dog, screaming back: “What happened?”

“Sasha ate poop!” she said with her own puppy eyes. Shit, I said. Shit.

Çiler Ilhan is a short story writer, novelist, essayist, born in Turkey, living in the Netherlands, writing in Turkish and English. Ciler Ilhan has contributed to 15 national and international anthologies and published three of her own: Chamber of Dream Merchants (Artemis, 2006), interconnected stories with traces of magic realism; Exile (Everest Publications, 2010), interconnected stories with themes from the invasion of Iraq to women’s rights in Batman (winner of the 2011 European Union Prize for Literature, published in over 20 countries); and, Nişan Evi (Engagement, Everest, 2021), a novella based on the true story of a cruel mass murder in eastern Turkey.

Çiler studied International Relations and Political Science at Boğaziçi University in Turkey, and Hotel Management at the Glion Hotel School in Switzerland. She has worked in hotel management, marketing/communications, and publishing (as editor/writer). She’s a member of Turkish and Dutch PEN.