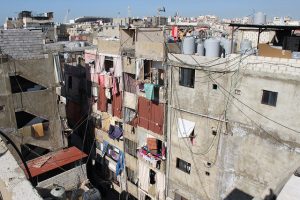 Laughter-Yoga In A Refugee Camp by Meike Ziervogel

Jul 31, 2017 • No comments
‘Oh, the smell is awful!’ Peirene groans as we step out of the taxi that has brought us to Shatila, the Syrian and Palestinian refugee camp in the south of Beirut.

Peirene, Suhir – our Syrian editor – and I arrived in Beirut last night. We are staying here for a week to give a creative writing course to twelve people living in the camp. We hope that they will contribute to a collection of interlinked stories to be published in English translation next year as Peirene Now! No. 3.

‘There are issues with the sewage system in the camp, Peirene.’ I now explain the smell. I can’t hide a hint of irritation in my voice. It’s not the Nymph’s first complaint of the day. She’s already commented on the heat and the traffic. And initially she didn’t even want to get out of the taxi at the camp entrance. She was scared of being electrocuted by the naked cables that run everywhere above our heads. I sigh. Maybe I should have left her in London. ‘And what do you expect?’ I continue. ‘The camp was originally set up for 3,000 people. Because of the Syrian crisis, it is now estimated to house 20,000 to 40,000 inhabitants. ‘ Peirene does not look impressed and I begin to lose patience. ‘Frankly Peirene, Suhir and I can manage this workshop on our own. If you want you can go back to the hotel.’

We enter the building where Basmeh and Zeitooneh (The Olive and The Smile) the NGO with whom we are collaborating on this project is based. We pass women in black jalabiyas crouching on the stairs waiting to be seen by doctors from Medicins Sans Frontier. On the second and third floor children’s noise greets us. Here one of only two schools in the camp is based. Boushra from B&Z shows us into a noisy room, right next to the children’s music classes. It’s just before nine. We are starting at nine. None of the participants has yet appeared. It turns quarter past nine, half past nine. Boushra re-assures us that they will turn up. At quarter to ten Peirene, who has decided to stay with us after all, whispers into my ear: ‘I knew this project was bound to fail.’ Eventually at ten the participants trickle in. We start at 10.30. Student time keeping, I think to myself. My Germanic sense for discipline is aggrieved. We have a lot to get through in three days. Most of the participants – equal amount of men and women, the youngest 19, the oldest 41 – have never written creatively before. At the end of the first day I emphasise: ‘Anyone who isn’t there tomorrow at 9 sharp, will leave the project.’

The next day everyone arrives at quarter to nine. We are provided with a different room with two working fans. Time flies, Suhir and I give the participants a number of different writing exercises about plot, character and place. The progress and commitment is impressive.

In the evening the Nymph falls onto her bed exhausted. ‘Today was really good,’ she says. I smile. It’s the first compliment Peirene has paid Suhir or me since our arrival in Beirut. ‘But if you continue driving them so hard you will switch off their enthusiasm and lose them,’ she then adds.

For a moment I’m quiet. I know she’s right. ‘What do you suggest we should do to lighten the atmosphere?’ I then ask.

‘Laughter-yoga!’ The Nymph immediately replies as if she’s been waiting for this chance for the last few days. She sits up with gleaming eyes. ‘Do you mind if I lead it?’

I have no idea what she’s talking about. But I’m too tired to object. ‘I give you 15 minutes for it,’ I say before I fall asleep.

The next day Peirene sits us all in a circle. ‘Ha,’ she begins. Everyone in turn has to repeat it. For a moment I worry that one or the other might refuse. This is just too silly for words. But no. They all play along. ‘Ha, ha,’ Peirene then says. We repeat. ‘Ha, ha, ha.’ Then she gets up, walks around the outer circle, holding her tummy, bending double. ‘Ha, ha, ha, ha ha hahi hohohohahihoho.’ We imitate. By now most of us are really laughing. Peirene lies down on the floor, laughing, kicking her legs up into the air. We follow. Eventually she asks us to quiet down. For five minutes, we lie on our backs, eyes closes, breathing calmly.

The laughter yoga works wonders. The next hours are work intensive but feel light and breezy. We finish on a high note. In the evening the group meets one more time for a meal in a restaurant.

‘Do you think we will have a good book by next year?’ I ask the Nymph as we board the plane back to London. Despite her trepidations at the beginning she seems to have developed a good sense for the group.

‘Yes.’ She pauses for a second. ‘Thanks to my laughter-yoga.’ Then she adds with a mischievous smile, ‘I think I should lead some laughter-yoga sessions with your long-suffering employees back at HQ’.

This blog was originally published as part of Peirene Press‘s series Things Syntactical. The Pain and Passion of a Small Publisher on 17 July 2017.