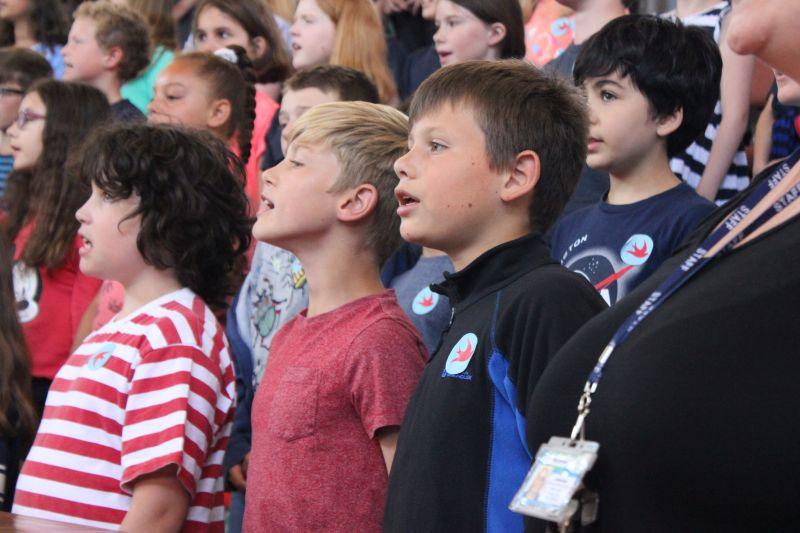 Languages & Creativity: We are Children of the World

The Sheldonian Theatre in Oxford is much accustomed to languages other than English echoing around its grand interior – only mainly this is for official University ceremonies, held in Latin, of course. Not so, when 500 primary school children turned up to perform Lin Marsh’s new multilingual composition as part of the Oxford Festival of the Arts. Read this and weep with joy – then download the song and everything you need to teach and perform it (free, link in the text).

We are Children of the World

Yesterday, we were delighted to host 500 school children from across Oxford to sing We are Children of the World in the Sheldonian Theatre as part of the Oxford Festival of the Arts.

After months of learning the multilingual song, you could see the excitement in the pupils’ faces as they came together in the majestic Sheldonian Theatre to reap the rewards of all their hard work. The children seemed intrigued by the circular venue, pointing at the painted ceiling and sharing their delight at this unusual space.

For many of the children this might have been their first time in the Sheldonian Theatre, and it was definitely a first for the Sheldonian to have 500 children eating their packed lunches on the benches (something which is normally prohibited). A big thank you is due to the Sheldonian for being so accommodating, it would have been impossible to bring this all together without their support for the project. Thank you also to the Oxford Bus Company for giving the pupils free bus trips to the concert and rehearsal.

Jon Cullen, Director of Music of Magdalen College School, conducted the performance and led the rehearsals. He created teaching packs for each of the schools involved in the concert which guided them through the song, line-by-line with instructions and tips via audio and video. His energy and passion during the concert helped keep the children enthused and kept their attention on the singing – no mean feat when they’d had to sit still for most of the morning.

The pupils were also taught movements to do during the song by Lin Marsh, who composed the song, which really helped lift the performance. Just before the Brazilian samba at the end of the composition, the children were instructed to pretend to be talking to each other, excited at the idea of carnival, then to suddenly stop before singing the next lines of the song: ‘Listen, do you hear the music playing…’ This generated such enthusiasm and excitement from the children involved that their singing became even more powerful and joyous.

You could tell the moment when the parents starting arriving for the concert from the children’s faces, which all shot up to the balconies, seeking out their families, and from the manic waving that ensued once they’d been located. There was a buzz of excitement as the minutes ticked away until the first performance.

The concert went even better than we could have hoped. The children gave their all and seemed to really enjoy singing together with so many other children and an orchestra in a venue as special as the Sheldonian. Lin Marsh brought speakers of each of the languages up to the front of the venue at the start of the concert and asked them to say the first line of the folk song in their language. This really helped put the languages which feature in the song in context – they are languages spoken every day by people in Oxford’s schools and communities, and, indeed, by people in the Sheldonian that day.

We’d like as many schools and choirs as possible to share this joyful experience. The We are the Children of the World song is now available to download on our website, along with teaching resources including the musical score, lyrics, backing track and PowerPoint guides to teaching the song. You’re free to use and perform the composition – all we ask is that you let us know if you do so.

This post was first published on the Creative Multilingualism site on 28 June 2018.