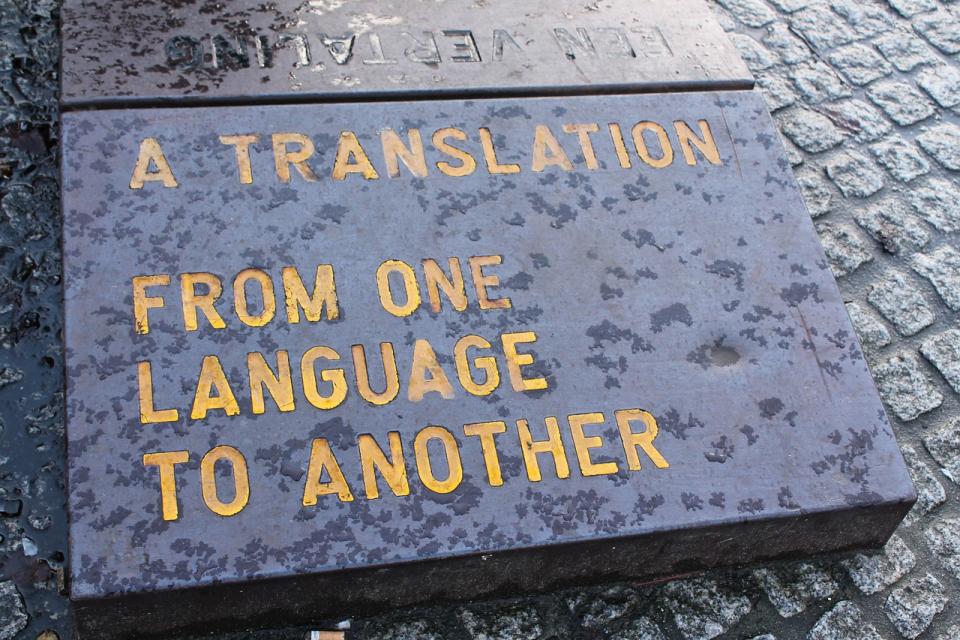 I was asked to write a City Guide in my native language, German. Then it was translated into English – badly. Here’s what happened next…

I’ve been a writer for as long as I can remember. I have been writing pretty much non-stop since I was a child, for the simple reason that I love it. Writing is not just what I do, it’s what I am.

When I moved to the UK from Germany at the age of 21, my writing began to change. At first, only now and then, but later more and more, I began to write in English. Nowadays I very rarely write in German. With one notable exception: I was commissioned to write a travel guide to an English city. In German. A German publishing house had found me via my (English language) blog and guest blog posts (again, all in English), and invited me to submit some samples. A short time later, the job was mine. I was delighted. They liked my style! I would be a published author! It was a win-win.

From then on, I spent every weekend and every holiday doing research and fieldwork in the city which the guide book was about. I enjoyed it, but it became all-consuming. In the end I lived and breathed the city. Every day I got up early, wrote bits towards the guidebook manuscript, did my day job, worked on my PhD, edited the manuscript, and then wrote some more. My family hardly saw me. It was a labour of love. I wrote myself into this book with my heart and soul, and the publisher loved it.

Then I heard that the book was going to be translated into English. By someone else. As soon as I heard, I asked if I could translate it myself – but it was too late, the contract had already been signed by a translation agency. I asked if I could look over the translated manuscript before it went to print, but they said no. When I finally got to see the finished product, I was excited, and then … appalled. The translation was terrible. It was littered with mistakes, clumsy expressions, and jarring Americanisms. Puns and subtleties were literally lost in translation. In places the translator had added incorrect details, in others they had left out essential information.

False friends – words which look the same in both languages but have different meanings – were translated literally, which made no sense in English. Where I had written about the city’s university using the German Hochschule (university), this was rendered, word for word and incorrectly, as ‘High School’. Where I had written about a famous historical artefact being preserved for posterity (Nachwelt), in English this was now apparently on display for the ‘after world’. Some of the changes were even more bizarre: ‘inside’ became ‘outside’, nine statues were cut down to three statues for no apparent reason, and parts of guided walks were missing so that you were left stranded in the middle of nowhere. The city portrayed in the English version is not one I know. And it’s not one I would recommend visiting. It’s certainly not the one I wrote about in German. If it wasn’t so sad, it would almost be funny.

But as much as I try, I can’t see the funny side. I don’t think I have delusions of grandeur about my writing, or about the scope of the project. Many of the mistakes – however horrifying they seem to me – might not even be noticed by readers who don’t know the city, and who don’t know the original text. And yet, I just can’t make my peace with what happened, and certainly I can’t bring myself to take part in book signings and other promotion events, as the publisher has asked me to. And that’s because through our language, we construct out identities. Multilinguals build their identities in more ways than one, and it’s a conflicted and precarious process. My writing is part of me, and I feel like this part has been misjudged, misappropriated, and yes, violated. I know it’s only a little guide book and it won’t matter to most people, but I feel I need to protect my sense of who I am, and its representation to the outside world.

I’ve learnt a lot through this ‘tale of two city guides’. Mainly, to consider more carefully which publisher to trust with my work in future. Maybe the publisher has learnt something too: if you want a writer’s personality and heart to shine through, you’ve got to accept that the writer actually has a personality and a heart. And if you’re lucky enough to have a bilingual author, use their skills! For translations, at the very least you should have someone compare the original with the foreign language version before the book goes to print. Even for something as seemingly simple as a guide book, as soon as you go beyond a mere list of locations and opening times, a run-of-the-mill translation is not going to cut it. In the age of TripAdvisor and Google Translate, it’s even more important to trust your author’s expertise in the subject content, and – if you’re lucky enough to be able to draw on it – in the translation too. Otherwise it’s a lose-lose all round.

This post was first published on the Creative Multilingualism site on 19 April 2018.