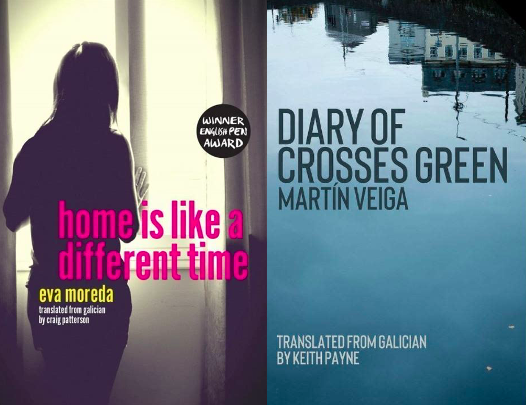 Living in Madrid, the language I use every day is Castilian Spanish. Of course, Castilian is also the language in which I do most of my reading and whilst I love the literature that authors writing in the Spanish language produce, in everyday life, and with La Española, I also want to discover the literature that other languages on the peninsula have to offer. I think it is incredibly important that when we think of “Spanish literature” we don’t reduce this to work produced only in the Castilian language. Through La Española, as well as writing about Spanish language literature, I have also explored the writing of the Catalan and Basque languages, and this month I’m delving into the world of Galician literature. Whilst I am only able to read the work that comes out of these languages thanks to translation into Spanish or English, I feel strongly that literature from these languages and the whole Spanish peninsula is highlighted, and I hope that La Española can also help you discover this writing too.

The earliest works written in the Galician language date back to the early 13th-century and the trovadorismo tradition, a Portuguese-Galician lyrical movement. After the separation of Portuguese and Galician, the Galician language slowly disappeared from literature. Despite there being somewhat of a revival in the 19th century, many writers from Galicia preferred to write in Castilian. Today, however, more and more writers are choosing to use Galician, two well-known names here are Manuel Rivas and Teresa Moure. But given the small numbers of authors writing in Galician, the translation of these works into English is few and far between. The wonderful Francis Boutle Publishers (based in the UK), who are dedicated to bringing these lesser-used languages into English, has, however, published some fantastic translations from Galician writers, and I’d like to introduce you to Eva Moreda and Martín Veiga.

In Home is like a different time, Eva Moreda writes of the lived experiences of emigrant communities in 60s and 70s London – particularly Galician communities. This novel is written from the point of view of Gelo, a recently widowed man who left his hometown of Veira for London. Throughout the novel, Gelo addresses a “you”, who is in fact Elisa, another Galician expat he knows from back home in Veira. In some ways, Home is like a different time can be considered a story of a love that was never acted upon, (Gelo’s love for Elisa) but in reality, it is much more than this. As Gelo reflects on his past in Veira and his present in London, readers are drawn into ideas of time, home, and belonging. Whilst Gelo’s home is Galicia, anyone who has moved away from their home can certainly relate to his story. Throughout the novel Moreda evokes ideas of longing and belonging, and the idea that the home we leave will be forever suspended in time as we live our lives in a different city or country. After all, home is place we never really leave, it is a place that, in our minds, remains exactly the same as it was when we left it. The novel certainly allowed me to reflect on ideas such as this, and whilst Moreda’s prose is precise, it is incredibly emotive; a quiet, yet moving novel.

Diary of Crosses Green is a bilingual poetry collection, and although different in both format and themes, as with Home is like a different time, it is also set outside of Galicia, with Veiga writing of the River Lee in Cork.  His beautiful poetry takes us on a journey along the banks of the River Lee, of course with poems of water, nature and seasons taking centre stage. However, Veiga also offers reflections on time and its mysteries as we embrace his gentle poetry that takes us slowly meandering down the river, and through the life that surrounds it. Veiga’s poetry is slow, quiet, and nostalgic, offering delicate tales of how our surroundings can deeply affect us.