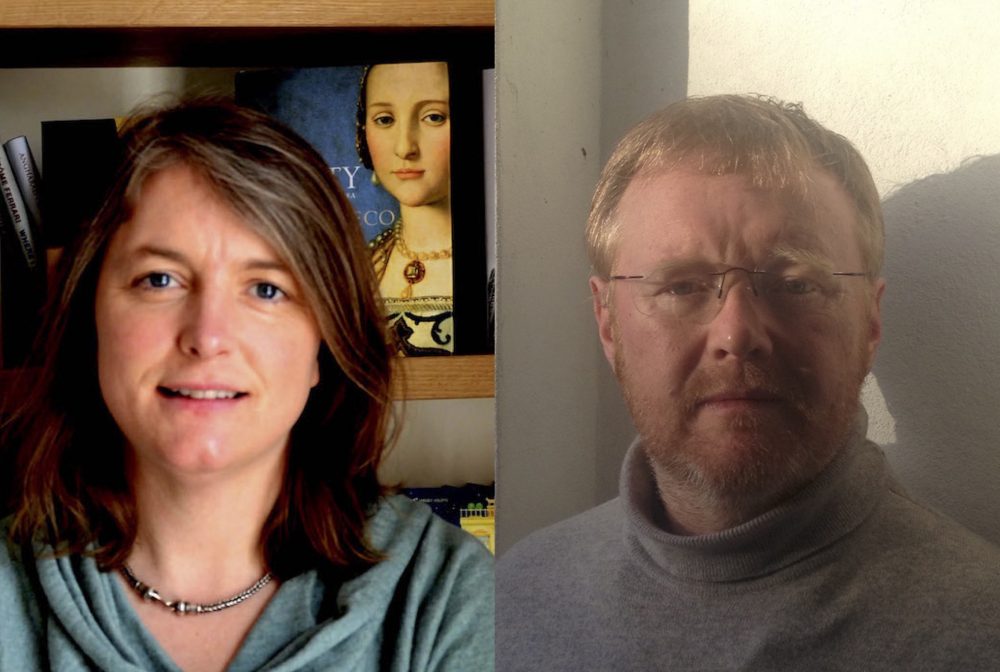 Katharina Bielenberg and Jamie Bulloch on the past, present and future of German literature in the UK. Interviewed by Judith Vonberg

It’s hard not to envy the staff at the Hachette publishing group who have their offices in the London headquarters. The views from the light-filled, top-floor café in this glass palace on the bank of the Thames are breathtaking. Its landscaped roof terrace is the ideal spot for city gazing – but not on a chilly November day. I was there to meet Jamie Bulloch and Katharina Bielenberg, two passionate champions of German literature who also happen to be husband and wife. After a brief meander on the terrace, we retreated to the warmth of the café where many people were enjoying a late lunch while working at their laptops or, in some cases, reading a book (yes, an actual paper and ink book).

Katharina, Associate Publisher at MacLehose Press, is a lively, forthright woman with a deep understanding of the world of publishing and unquenchable zeal. Founded by Christopher MacLehose less than a decade ago, the press, an imprint of Quercus Books, publishes high-quality fiction from around the world translated into English. Two or three of the books they publish each year are translated from German. This year’s list includes A Sense of the Beginning by acclaimed Austrian writer Norbert Gstrein and Kingdom of Twilight by Steven Uhly, an author of German-Bengali descent.

“Translated fiction is going in a very positive direction in the UK,” Katharina tells me. “More and more people are getting interested in it. And the Man Booker International Prize helps enormously, bringing with it funding and a huge PR machine.”

She has mixed feelings about the way translated fiction is promoted in bookshops, however. When Blackwells in Oxford turned over four big bookshelves to translated fiction, it “felt a bit like segregation,” she says. “But we should be pleased too that being translated is now seen as a successful selling point for a book.”

Katharina is particularly excited about the current state of German fiction in the UK, especially German crime fiction. MacLehose has just bought its first German crime series, written by Oliver Bottini and set near Freiburg. “His books aren’t just plot driven,” she tells me. “Bottini is a very clever writer and develops his characters over the course of the whole series.”

But rewind a few years and crime novels were far from Katharina’s mind. “The box-set culture and the huge popularity of Scandinavian crime fiction has done a lot for series like these,” she says.

Jamie, a thoughtful and very amiable man whose casual attire betrays his status as the stay-at-home spouse, is more explicit. “You have to choose the books that have commercial potential,” he says. English readers want German books that are either about the Nazi period or set in Berlin, he explains.

One of Jamie’s most successful translations was Look Who’s Back by Timur Vermes, which ticks both boxes. This bestselling satirical German novel (about Adolf Hitler waking up in twenty-first-century Berlin) has sold more than three million copies worldwide and sparked a film adaptation – available on Netflix since April this year – and a two-part Radio 4 dramatisation.

Jamie’s most recent translation for MacLehose is Steven Uhly’s Kingdom of Twilight, a sprawling 550-page historical saga set during and just after the Second World War. It traces the lives of Jewish refugees and a resettled German family, taking the reader from Lübeck to Berlin and Tel Aviv to New York. “I was blown away by it,” says Jamie, reflecting on his first encounter with the novel. “The sheer depth and richness is remarkable. I’ve read it cover to cover seven or eight times now and I’m still not bored.”

But Jamie is a prolific translator and many of the books he’s worked on have nothing to do with Berlin or the Nazis. In 2013, his translation of The Mussel Feast by Birgit Vanderbeke was published by Peirene and more recently he translated The Girl Who Beat ISIS, a non-fiction first-person account of what happened after two Yazidi women were captured by the so-called Islamic State.

He seems to like the variety. “I absolutely loved doing Look Who’s Back,” he says. “I was told to translate the humour as freely as I needed, to make it work in English.” Some translators might have been daunted by the task, but not Jamie. “He’s a bold translator,” says Katharina. “He’s not nervous about finding totally new ways of doing things.”

Non-fiction offers a similar level of freedom. “You can afford to take even more liberties with the language in those books,” says Jamie with relish.

What he enjoys most of all, however, is the prospect of translating brilliant German prose into English. “There’s something about an eloquently written sentence in one language that suggests an equally eloquent sentence in English,” he says. The better the original writing, the easier and more enjoyable the process, it seems.

It may sound like lonely work, but both Katharina and Jamie emphasise its collaborative nature. They have even worked together on a translation of Daniel Glattauer’s Gut gegen Nordwind (translated as Love Virtually), which tells the story of an internet love affair through the emails of Leo and Emmi. “It was a really fun thing to do,” says Katharina, recalling the late nights spent drinking wine and working through the draft together.

Then there’s the relationship between the translator and his editor – “as a translator, you should welcome as much editorial input as you’re offered,” says Jamie – and between various small publishers of translated fiction. “Sometimes we’re in competition, but there are always enough books to go round,” says Katharina. “And we’re all going in the same direction.”

According to Katharina and Jamie, that direction is unequivocally positive. Translated fiction in general – and German fiction in particular – are gaining momentum. Here’s hoping that not even Brexit can halt its progress.