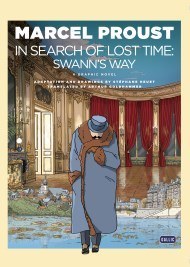 The greatest French literary masterpiece of all time is now available as a graphic novel.
Proust‘s oceanic novel In Search of Lost Time looms over twentieth-century literature as one of the greatest, yet most endlessly challenging, literary experiences.

Now, in what renowned translator Arthur Goldhammer says might be “likened to a piano reduction of an orchestral score,” the French illustrator Stéphane Heuet re-presents Proust in graphic form for anyone who has always dreamed of reading him but was put off by the sheer magnitude of the undertaking.

This graphic adaptation reveals the fundamental architecture of Proust’s work while displaying a remarkable fidelity to his language as well as the novel’s themes of time, art, and the elusiveness of memory.

‘Heuet’s love of Proust shines through in his inventive drawings.’