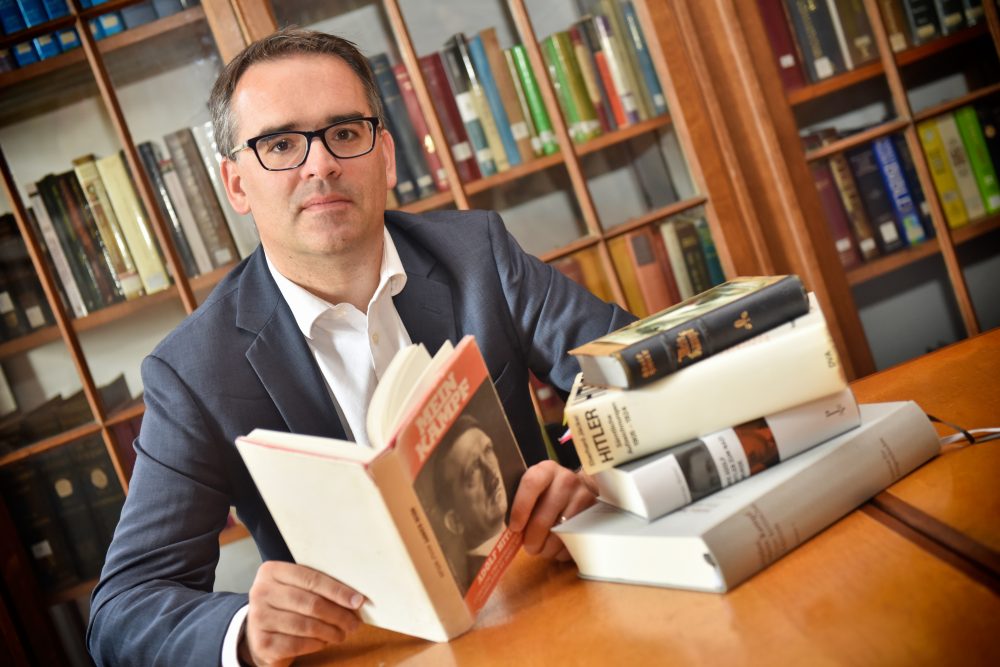 University of Aberdeen historian unmasks Hitler as the real author of a ‘biography’ which boosted his rise to power.

The first biography of Adolf Hitler, which presented him as ‘Germany’s saviour’, compared him to Jesus and helped propel him up the political ranks, was actually a self-penned ‘act of shameless publicity’, it has been revealed.

Published in 1923, the book (Adolf Hitler: Sein Leben und seine Reden (Adolf Hitler: His Life and his Speeches) was the first major profile of the would-be dictator and appeared under the name of north German aristocrat and war hero Victor von Koerber.

But historian Thomas Weber, from the University of Aberdeen, has unearthed compelling evidence – including signed testimony – hidden in a South African archive which he says demonstrates it was ‘almost certainly’ written by Hitler himself.

He said: “The book, which also includes a collection of Hitler’s speeches, makes some outlandish claims arguing that it should become ‘the new bible of today’ and uses terms such as ‘holy’ and ‘deliverance’, comparing Hitler to Jesus likening his moment of politicalisation to Jesus’ resurrection.

“To find it was actually written by Hitler himself not only demonstrates that he was a conniving political operator with a masterful understanding of political processes and narratives long before he drafted what is regarded as his first autobiography, Mein Kampf, but also challenges the accepted view that at this stage in his life he did not see himself as the man to lead the German revolution.

“The image of Hitler that has been conveyed in recent years is of someone who even once he had entered the Nazi party was really doing the bidding for someone else – a gift to propaganda to attract populist support – and that it was only in the writing of Mein Kampf several years later that he came to believe he could be the saviour or German messiah.

“The fact Hitler wrote the biography and collated the speeches himself and put it together under a different name speaks to the fact that at a much earlier time he saw himself in this ‘saviour’ role and that he started in a very manipulative way to plot his way to the top.”

Professor Weber says the discovery of this ‘shameless but clever act of self-promotion’ is significant because the biography played a crucial role in helping Hitler to build his profile among the more conservative elements of German society in anticipation of an imminent national revolution.

It is, he says, for this reason that von Koerber was handpicked for the role and introduced to Hitler by General Ludendorff†.

“Von Koerber was a blue-eyed and blond East-German aristocrat, military hero and writer. This made him the perfect candidate to present a biography of Hitler as it implied that the Nazi leader was already in receipt of widespread support among traditional conservatives,” Professor Weber adds.

“This was essential as although Hitler and the Nazi party were building a profile in their base around Munich, it did not extend much beyond Bavaria. Indeed, his initial refusal to be photographed meant he was little known outside the province.”

“Hitler knew he depended on the support of traditional conservatives but that at this stage he didn’t have the credibility to say ‘only I can be leader’. Instead he wanted to be piggy backed to power and began, through manipulative means, to create an expectation of a new kind of leadership that could not be filled by any of the established political elite but only by a new leader coming from below.”

Professor Weber made the discovery while carrying out research for his latest book about how Hitler became a Nazi.

“While completing my book, I stumbled across a reference to von Koerber’s private papers at the University of the Witwatersrand in Johannesburg. Once I had flown to South Africa, it quickly became apparent that surprisingly they had not previously been investigated in this context. Going through his papers, I soon realized that von Koerber, who later broke with the Nazis, had merely been a front for the profile and not its real author.

“I found a signed testimony given under oath by the wife of the book’s publisher stating that Victor von Koerber had not written the book and that Hitler had asked General Ludendorff if he could find a conservative writer without any connection to the Nazi party to put his name to it.

“I also found a statement by Koerber as well as a letter he wrote to a man with whom he had been incarcerated in a Concentration Camp that gave details about Hitler’s authorship of the book. Subsequently, in Germany, I found a document from 1938 in which von Koerber alludes to Hitler writing the book, stating that it was written ‘on the initiative of and with the active participation of Adolf Hitler’. We have to take this statement in the context of the period when he could not have openly stated he did not write it.

“The 1923 book also bears a striking similarity to a letter Hitler had written in late 1921 to introduce himself to a major donor to the party and contains the first references to his time in a military hospital after the First World War as his period of political awakening, which would later be repeated in almost identical language in Mein Kampf.

“Taken together, the pieces of evidence now available to us build a compelling picture that this was indeed an autobiography written to boost Hitler’s profile as the ‘German saviour’ and that even at this early stage of his career he was an astute and manipulative political operator.”

Professor Weber presents his evidence in the Dutch and English-language editions as well as the German paperback edition of his new book about how Hitler turned into a Nazi. It is set to be released in the Netherlands by Nieuw Amsterdam under the title of Hitlers Metamorfose in early November and next year in the UK by Oxford University Press and in the U.S. by Basic Books. The hardback edition of the German translation of Weber’s book was already published in May by Propyläen under the title of Wie Adolf Hitler zum Nazi wurde: Vom unpolitischen Soldaten zum Autor von ‘Mein Kampf’.