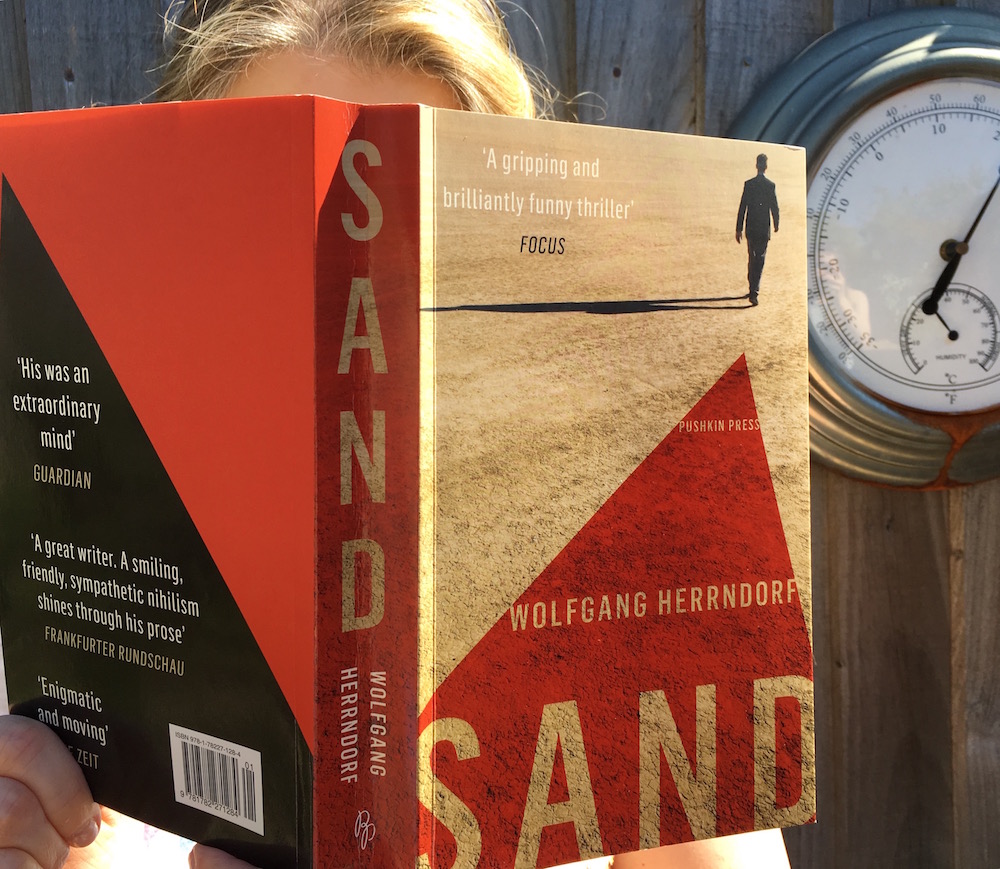 North Africa, 1972. A man with no memory wakes up in the desert with a massive hole in his head. So far, so yawn: please, not another one of those lost memory characters stumbling around the plot trying to solve a mystery slash crime. Been there, done that, keep the T-Shirt. But hold on, not so fast: Carl (named after the label in his suit) is not your average unreliable narrator. In fact, although we’re trapped inside his head most of the time, he’s not the narrator at all. Somewhere, someone’s sitting at a desk writing all this down in the first person, someone who was there as a seven-year-old dressed in a T-shirt with Olympic rings and short lederhosen with red heart-shaped pockets. Who’s he? Not sure – everyone in Sand is reliably unreliable, apart from the author himself, Wolfgang Herrndorf, who’s reliably, and sadly, dead.

After the German writer Herrndorf was diagnosed with an incurable brain tumour in 2010, he churned out some literary gems, including the bestseller Tschick in 2010 (English, 2014, “Why We Took the Car”) and Sand in 2011 (English, 2017). In 2013 at the age of 48 he shot himself. Understandably, fittingly, ‘Sand’ is stuffed full of pain, gallows humour, false hopes, dead ends, absurd coincidences, misunderstandings, senseless chance events, torture and death. It’s set under a desert sun so merciless that a mere glance at the book’s hot cover triggers in us the reader an inverse Pavlov’s dog reaction of dry mouth. Does this all sound offputtingly soul-crushing? Not so! What holds this long novel together, over sixty-eight chapters and five ‘books’ (Sea, Desert, Mountains, Oasis and Night), is the search for meaning. Never mind the answers, it’s the questions that matter. And there are many questions. All together this make for an hilarious, intriguing, heart-breaking and ultimately gratifying read.

And now Lundgren had a problem. Lundgren was dead. A young simpleton murders four hippies in a commune (it is the 1970s…); a mediocre spy doesn’t survive a handover; a pair of bumbling policemen investigate, not to much avail. What else happens? A dangerously smart American beauty muscles in on the act; a fake psychiatrist tries to get to the bottom of Carl’s subconscious; a small-town crook and his henchmen get involved in the odd bit of kidnapping, torture and blackmail, and, the hunt is on for a man called Cetrois, who may or may not exist. A mysterious centrifuge makes an appearance, or it might be an espresso machine, who knows? More important seems to be a mine. This could mean a number of things: a bomb; a pit; a cartridge for a pen.

A ‘cartridge for a pen’?! Yes. Now let’s talk language and translation. The characters in Sand are supposed to be speaking French, and thanks to Pushkin Press and Tim Mohr we can now read Sand in English. Translator Tim Mohr, also a writer and former Berlin Club DJ, constructs an achingly immediate desert world by locating Sand’s English prose somewhere between 1970s nostalgia and today. In German and French, ‘mine’ can mean the inside of a pen, and the fact that Carl knows this brings him one step closer to solving the puzzle. But is he close enough to completely solve it? Well, you must decide for yourself, but really, that’s not the point. He tried, he really did. And in the end, that’s what matters.

translated from the German by Tim Mohr

Heike Krüsemannis currently completing her PhD thesis on representations of Germanness in UK discourses, whilst keeping herself afloat as a teacher, researcher and freelance writer. Her Quirky Guide to Oxford will be published by Marco Polo in German and English in 2018. Heike’s 30 second video review of Wolfgang Herrndorf’s Tschick. Heike’s blog German in the UK. Twitter: @HeikeKruesemann

Another ‘Sand’ fan is Eileen Battersby of The Irish Times: read her review here.