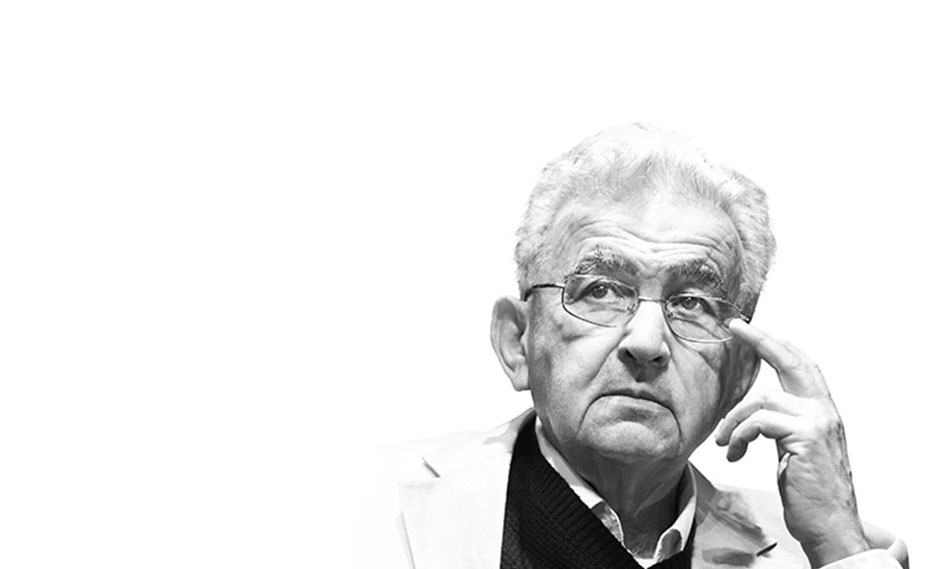 Grigory Kanovich at 90 by Max Easterman

Grigory Kanovich was born in 1929 into a Jewish family In the Lithuanian town of Jonava. His childhood, described in his novel Shtetl Love Song, was traditional Jewish and largely happy. All that changed violently in 1941, when the Nazis invaded Lithuania and his family fled through Latvia to Soviet Russia, where they spent the war years as refugees. He returned to Lithuania and its capital, Vilnius, in 1945, where he published his first book of poetry – at the age of 19 – and then went to university and graduated in Slavic Studies.

He has subsequently devoted much of his career to documenting in a series of novels the instabilities and insecurities of life in Jewish communities in Eastern Europe over the past two centuries. He has also written nearly twenty stage plays and a number of screenplays. but it is the novels which have attracted most critical praise outside his own country. Sadly, only two (Shtetl Love Song and Devilspel) have been translated into English. Two of them – Smile Upon Us, Lord and A Kid For Two Pennies – were turned in to an award-winning stage play.

Kanovich has won many awards for his work, among them the Order of the Lithuanian Grand Duke Gediminas, and the Grand Cross of the Order for Merits to Lithuania. He served as chairman of the Jewish Community of Lithuania, from 1989 to 1993, and as a deputy in the last Supreme Soviet of the Soviet Union, where he used that position to warn Mikhail Gorbachev of the growing danger of racism and anti-Semitism in his adopted country. He emigrated to settle in Israel in 1993. As he celebrates his 90th birthday, he is still regarded as the foremost living writer on Jewish themes.

REVIEW of DEVILSPEL by Grigory Kanovich

‘…the most lasting monuments are made not of granite or marble, nor from slabs of stone, but are constructed in the heart and passed from generation to generation on the breath of the living.’

In Shtetl Love Song, Grigory Kanovich’s first novel translated into English (reviewed here, in April 2018), he paints with his ‘breath of the living’ an affectionate and unforgettable picture of his life between the two world wars in the shtetl of Jonava, one of the the towns and villages of what had been the Pale of Settlement, the only places in the Russian Empire where most Jews could legally live. Jews and non-Jews – in Kanovich’s case Lithuanians (and Poles) – lived side by side in the newly independent Lithuania and, in spite of outbursts of anti-Semitism, in some kind of peaceful co-existence. It is a now vanished world, utterly destroyed when the Nazis invaded in June 1941 and wiped out 95% of Lithuanian Jews – Litvaks – aided by local collaborators: the most complete application of the Final Solution anywhere in Europe.

Kanovich and his family fled Lithuania as the Nazis arrived, and Devilspel is about the onset of this horrendous ethnic cleansing in one small town, Mishkine, where Jews were in a minority but made a decent living as providers of the essential services any community needs: the tailor, the newsvendor, butcher, miller, the doctor and the haberdasher. It is about the fate, and fatalism, of these Jews:

‘Curiosity … was a vice that would eventually be the doom of the Jews … the Jew says “why” even before he utters the word “Mamma”’.

So keep your head down and just get on with life…

This is not a documented story of the German invasion of Lithuania, but a moving evocation of a watershed moment in European history and its impact on both Jewish and non-Jewish people from Mishkine: a collection of finely drawn personal portraits, of lives interdependent and experiences interwoven, as the Soviets, who annexed the country a year earlier, precipitously retreat before the Nazi advance.

We meet a dramatis personae whose thoughts and actions are described with extraordinary insight and shattering poignancy: Danuta Hadassa, born Skujbyszewska, an aristocratic Pole who marries a Jew, and who spends much of her life dancing for the guests at Jewish weddings and ends up the caretaker of Mishkine’s Jewish cemetery. In spite of all this, she refuses to convert: ‘Religion isn’t a dress. It’s better to wear old clothes than borrowed brocade cut for someone else’s shoulders.’ Her elder son digs the graves and has a reputation for being taciturn – in the local parlance someone is ‘as tight-lipped as the gravedigger Yakov’. Her younger son, Aron, adopts Marxism, eats pork and goes to Moscow. The Jews accepted her, the Russians left her alone … but the Germans? ‘I myself don’t know who I am. Am I a Pole? A Jew? A Belarussian? A moth flying into the flame?’

Gedalye Bankvecher is Mishkine’s tailor, as attached to his old Singer sewing machine as to his wife and two daughters. Reizel, the elder, is married to Danuta’s Aron – when will she see him again, now the Russians have fled? Her younger sister, Elisheva, yearns to leave for Palestine, to build a new Jewish homeland. In the meantime, she works for Cheslavas Lomsargis, a Lithuanian farmer, keeping house, milking the cows. Her mother, Pnina, dismisses her dream:

‘“The Jews don’t need their own state, they just need a bisele mazl – a bit of luck – a good family … and of course, rich customers.” But God only knew in what blessed place … the flightly Elisheva might find a bit of luck.’

When the Soviets arrived, she worried they might send her master, as a landowner, to Siberia; now she fears he may turn against her, turn her in, as a Jew, when the Germans take over: ‘God’,she demands, ‘what kind of world is it where a dog is happier than a man? Why and for whom did You create this world?’

These are the questions Jews have posed down the ages: as strangers, yet much needed ones, in hostile lands, condemned to just get on with it and hope for better days. Lomsargis has his own solution for Elisheva’s future – but it is, for her, just one more dilemma in her increasingly fractured life.

Life is fractured for the Lithuanians as well: Lomsargis questions the rounding-up of Jews and the fact that no one stands up for them; but then he points the finger at Elisheva and the Litvaks:

‘What about you? Did any one of your people come out … when our people were being dragged into cattle cars [by the Russians]? In theory we’re all heroes, but when it comes down to it, we’re all the same shit.’

A latterday Shylock … from the other side of the Pale.

Others, like the unassuming Juozas Tomkus, Bankvecher’s tailor apprentice, break loose; he swaggers around the streets of Mishkine with a gun in his hand, heads out to the Jewish cemetery and digs up the gravestones to pave those streets of the ‘new’ Lithuania. And as the old tailor, Gedalye Bankvecher, is led away to the Zelenaya Roshcha – the green grove, Mishkine’s killing field, he stumbles on the old cobblestones; his daughter Reizel warns him he could break his leg:

‘“So tell me … what do I need legs for now?” [he] asked. Like all Jewish questions, it was addressed more to God than to his daughter. But on that June day of 1941, when he was most needed, God was not in Mishkine and there was no one who could give old Gedalye a clear answer.’

Shtetl Love Song ended on a note of some optimism: as Grigory Kanovich’s family escaped to Russia, it seemed there was hope left in the world. In Devilspel, as she surveys the wreckage of the graves in her cemetery, Danuta utters a last cry of despair, of hope and humanity extinguished:

‘Oh Lord! Great God! Have You grown deaf and blind? God, what will happen to the living if You, the Omnipotent and All-Merciful One, cannot even protect the dead?’

It is a chilling and devastating reminder of the destruction Nazi Germany wrought on the Litvaks, their homes, shops, synagogues and burial places in just those few months of 1941. When Grigory Kanovich returned to Lithuania after the war, almost every vestige of the Jews who had lived there had vanished. Devilspel is a vital and damning contribution to the understanding of what happened. Kanovich’s unfussy, matter-of-fact prose, interspersed with passages of great lyricism – all beautifully translated by Yisrael Cohen – only heightens the sense of fear and foreboding that fills the pages of this masterpiece.

Translated from the Russian by Yisrael Elliot Cohen