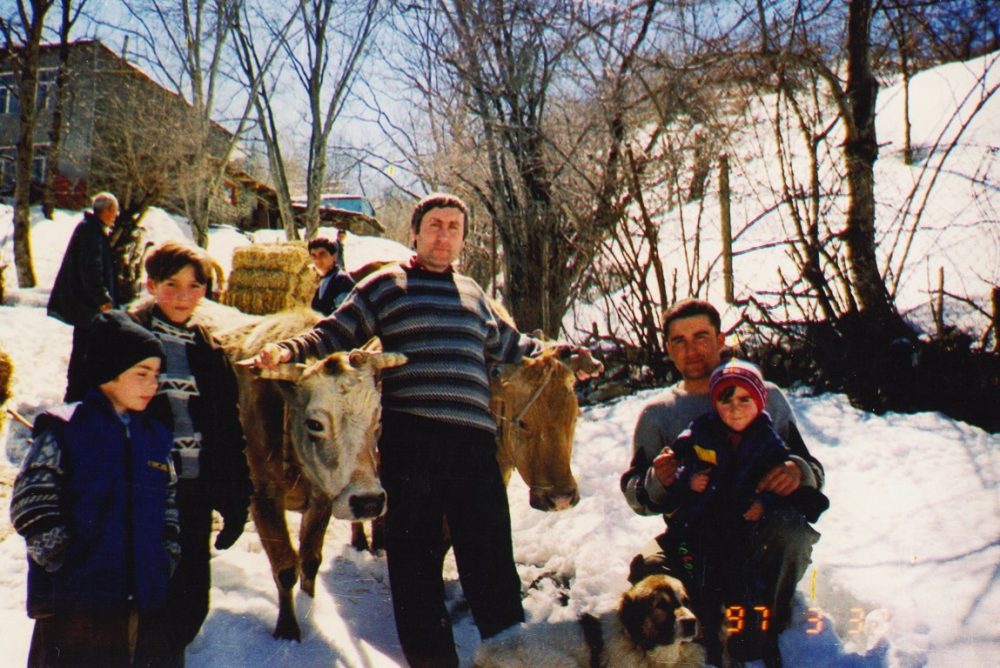 GEORGIAN WEEK: ‘Human Sadness’ – The World of the Gudamaqarians by Geoffrey Gosby

Geoffrey Gosby began attending Georgian lessons at Oxford as an undergraduate and went on to defend his DPhil thesis on Georgian linguistic structure in 2017, after receiving support for his postgraduate research from the Marjory Wardrop Fund. Several of his translations from Georgian to English have been published in the years since, including The Man in the Panther’s Skin: A Condensed Prose Retelling (Artanuji Publishing, 2018), The State Controller’s Office of the Democratic Republic of Georgia (The State Audit Office of Georgia, 2020), and Life in Soviet Georgia: 70 Stories (Artanuji Publishing, 2021).

In this post, the translator and member of the Oxford Georgian Translation Project introduces Goderdzi Chokheli’s home region of Gudamaqari and outlines its importance in Georgian history and literature.

Gudamaqari Gorge was first settled by the Chokhians, who called their village Chokhi. This was before the arrival of Christianity, and the Chokhians too were idolaters, although when they adopted Christianity, they recognized the lunar deity – St George – as their chief figure of worship.

Gudamaqari Gorge gradually began to see new villages appear. Those who had fled from their sworn enemies in Khevsureti took cover in that inaccessible place and made it their home as well. They erected their own shrines.

St George was divided up into three hundred and sixty-three pieces, and the Chokhians’ part of St George is the tongue. For that reason, the people of Gudamaqari were wary of “falling victim to the Chokhians’ tongue”.

Located in the Aragvi River valley on the southern slopes of the Greater Caucasus mountain range, the historical northeast Georgian region of Gudamaqari – Goderdzi Chokheli’s birthplace and the setting of Human Sadness – falls within the present-day mkhare of Mtskheta-Mtianeti (“Mtskheta-Highlands”). This administrative division combines the ancient Georgian capital of Mtskheta and its adjoining lands with a highland expanse (“Mtianeti”) spanning Gudamaqari and, among others, the prominent neighbouring historical regions of Pshavi, Khevi, Mtiuleti, and Khevsureti; another region of similar renown, Tusheti, is located in the adjoining mkhare of Kakheti. These highlands and their inhabitants occupy a special place in Georgian history and accordingly in Georgian culture, having existed largely beyond the Georgian state’s influence, yet acted at various times as its protector and refuge.

Leonti Mroveli mentions the Gudamaqarians together with the Pkhovians, or present-day Pshavians and Khevsuretians, in his 11th century chronicle The Lives of the Georgian Kings (Mepeta Tskhovreba) among the “mountaineers” to whom St. Nino unsuccessfully preached Christianity at Tsobeni following her conversion of King Mirian III of Iberia in the 4th century. Subsequently, we are told, the eristavi accompanying her “victoriously destroyed their idols”, since which, of the mountaineers, “some remain heathens to this day” (1). That Christianity has taken on its own shape here in the centuries since under the influence of local pre-Christian beliefs is illustrated by the traditions surrounding St. George, the revered protector of Georgia whose feast day St. Nino – by legend, his relative – is believed to have instituted. Giorgoba, which is celebrated on 23 November, commemorates St. George’s martyrdom, including his torture on the wheel, by the emperor Diocletian in 303 A.D. In one Gudamaqarian version, St. George was attached to a cartwheel by his fellow Tatars after preaching to them and rolled down from a high mountain, causing him to be cut into 363 pieces, the landing site of each of which is marked by a shrine. The shrine (khati, a term which otherwise denotes a Christian icon) of St. George in Goderdzi Chokheli’s home village of Chokhi marks the landing site of his tongue, and tradition has it that St. George “follows the tongue”, so that no Chokhian should be refused a woman’s hand in marriage for fear of her being cursed (2), while the nearby shrine of Pirimze Pudzis Angelozi is held to be the landing site of his arm, thereby accounting for the many fights that have broken out among its visitors (3). Not far from the first of the two shrines are two boulders that are associated with three devis – ogre-like beings from Georgian mythology – believed to have been pressed into service by St. George as bailiffs, where visitors to the shrine have traditionally slaughtered livestock as an offering to them (4).

Where Christianity had difficulty penetrating, the Georgian state in its various manifestations did as well. The Duchy of Aragvi (1335-1743), itself resistant to royal domination, succeeded eventually in bringing Mtiuleti, Gudamaqari, and Khevi under its control, only to succumb to a revolt of its peasant subjects in which the last of the dukes, Bezhan, was killed; meanwhile, Pshavi and Khevsureti resisted incorporation and remained territories that answered directly to the Georgian crown. This resistance to the close control of the state and its feudal system is reflected in the traditional social organization of the highland regions into temis, individual communities led by a khevisberi (“gorge elder”) who performed the roles of chief, priest, and military leader, and whose title is mentioned in the legal code instituted in the 14th century by Giorgi V the Brilliant in an attempt to impose regulation upon the blood law and other highland customs that he observed among the Mtiuletian tribes (5). While their beliefs and customs may have differed from those of other Georgians, however, the Georgian highlanders did not hesitate to confront the common enemy, whether this was the Muslim Kists (a historical term for the Nakh peoples, including the Chechens and Ingush) with whom they shared a frequently violent coexistence at Georgia’s borders, or those from further afield. When Agha Mohammed Khan invaded and sacked Tbilisi in 1795 in retribution for Erekle II’s signing of the Treaty of Giorgievsk with Imperial Russia, it was 300 warriors from the banks of the Aragvi (the majority of whom, according to the Chokhian chronicler of Human Sadness, Samkharauli, were Gudamaqarians) who fought a heroic last stand at the capital and allowed the king to retreat up the Aragvi valley, where the pursuing Iranians were stopped by another 300 warriors (in this case, Khevsuretians) and Erekle II was able to take refuge in a highland fortress (6).

The harsh frontier existence of the Georgian highlanders and their rigid social code inspired a wealth of folk poetry, upon which major figures in Georgian literature in turn drew from the 19th into the 20th century, including Aleksandre Qazbegi, Mikhail Javakhishvili, and perhaps most significantly, Vazha Pshavela, who, writing primarily of life in Khevsureti and Pshavi, “turns this heroic lost world into a golden age which is approaching its end; at the same time it stands at the dawn of humanity, its heroes Promethean battlers against cruel gods” (7). Reference can be found in his poetry to a number of the same aspects of highland tradition and its symbols which make their appearance in the Gudamaqari of Human Sadness, including often mortal conflict with the Kists across the frontier, the practice of severing the right hands of defeated enemies, and the tragic spectacle of the once-proud eagle brought low, as can a comparable concern with the inevitability of the individual and their ideals succumbing to the unstoppable forces of nature, including human nature in the form of the temi and its unbending traditions (8).

It is in this primeval Georgia, where individuals with their individual thoughts and worries must face the rules imposed by the collective and their own mortality as inevitably as they must face the avalanches that come rushing down the slopes, that the story of the Chokhians’ campaign is told, and the name of the Gudamaqarians at last takes its place among those of their highland neighbours.

Translator and member of the Oxford Georgian Translation Project