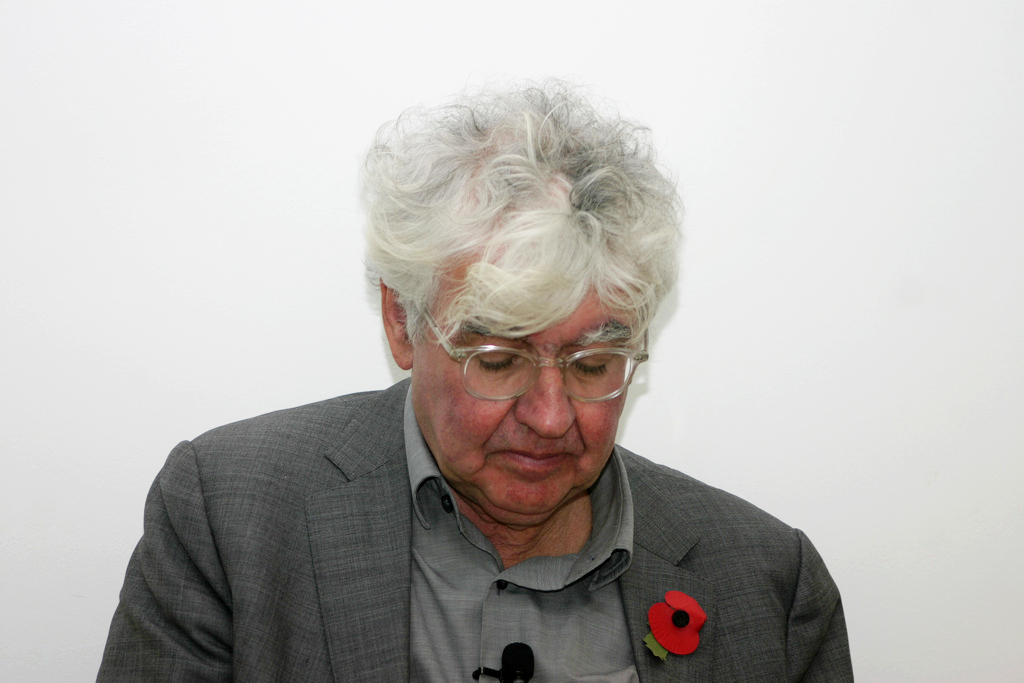 The time is right.

This year, this month we celebrate 25 years since the end of the Berlin Wall. On November 11th, on Remembrance Sunday, we also honour the fallen of the 2 World Wars.

The time is right to remember our history.

Europe is in crisis. Not just the EU, but the unity and values of the whole continent. It’s urgent that we discuss Europe and develop new ways forward. We have short memories and forget that the European idea is not just about a common market and currency but about a common culture and history.

In Britain we rarely separate the idea of ‘Europe’ from the ‘EU’ – possibly one of the reasons for our insularity, ignorance and scepticism. So let’s open our minds and our mouths. The time has come for some open debate. I want to reclaim the Euro-story from politicians and economists and hand it over to Europe’s leading artists, writers and intellectuals. Let’s start with a truly Great European, Geert Mak.

I call him ‘Great Geert’ for 2 reasons: the predictive text technology on my laptop and phone auto-corrects to ‘great’ every time I try to write ‘Geert’!

But Geert is great. He’s one of the most celebrated journalists, authors, travellers and commentators in the Netherlands. The Dutch call him ‘our national history teacher’ and after writing his magnum opus ‘IN EUROPE’, he was crowned ‘Europe’s portrait painter’– as befits a great Dutch Master.

This special month of November 2014, with perfect timing, and 10 years after travelling across Europe in a camper van and publishing ‘IN EUROPE’, Great Geert has launched the English edition of another magnum opus, ‘IN AMERICA: Travels With John’ (Harvill Secker). It is indeed a great work. 50 years ago John Steinbeck made an epic road trip across the USA in his truck with his dog and wrote ‘Travels with Charley’. Geert Mak made the same trip but with his wife and Sat Nav. The American Dream, he discovered, is going through a crisis of confidence. We all need to recapture our ‘dreams’ – in Europe too.

This November I discussed Europe with Geert Mak at the 6th SILK International Festival of Literature and Culture in Skudenshavn, Norway, where he was Guest of Honour. He’s also ‘Great Geert’ in Norway. His book ‘IN EUROPE’ is still selling well and the 35-part (!) TV series, which he wrote and presented, is currently being repeated on Norwegian TV.

A 20th century history of our continent, told through the personal stories of those who experienced this history first-hand in the villages and cities of Europe: if only we in Britain were as open to the European story.

I’ve had the pleasure of interviewing Geert Mak a few times over the past year and each time my admiration for him as a journalist, historian, prose writer and storyteller grows. Wherever he travels he seeks out ordinary people, listens, observes and faithfully reports what he sees. For Mak a single house or village can contain as many stories as a whole city. He is a combination of Studs Terkel, John Steinbeck and Rembrandt.

Here are some quotes from my interviews* with ‘The Great Geert’ about Europe today. Do Read. And Remember.

“Europe is out of balance, not just as a result of the financial crisis; there is a deep cultural clash of very different values.”

“The EU has to go through 2 phases of integration and federation – as the USA did. And look how long it took them – and they have still not finished.

We have gone through Phase One, which is creating and building the institutions, but now we are in Phase Two, the hardest phase of all – the attempt to integrate and influence each other’s internal affairs. It is a painful, complicated and dangerous phase. The USA still shares a dream – and that dream was enough to bind people together for nearly 2 centuries. We also have to create a shared, common story in Europe, to create enough solidarity and trust to go forward together.”

“Cameron and Merkel talk about returning to national values. But we can’t return to the idea of the nation-state of the 19th century. In the 21st century the EU must be about protecting local values, combined with some super-national ideas. Some policies need to be collective – on climate change, military, fishing, energy and so on – but it is illogical to combine completely different cultures and currencies. I wouldn’t be surprised if we end up with 2-3 different fiscal unions.”

“I’m not calling myself a visionary at all but when I travelled across Europe and wrote IN EUROPE (from 1999 to 2003), I saw then that the EU was out of balance. It was a strange federation. Instead of organising clever central responsibilities in Brussels, the EU instead issued crazy directives on chocolate, bananas and French cheese. These were things that people cared about and it angered them. That cost the EU the support of the people. Not to have their local tomatoes!”

“If I were to write IN EUROPE again today then I would rewrite the final chapter – the story after 1989. Before that the history of the 20th century remains the same – blood and killings. But we did not see the dangers after 1989, the wonderful year when the Berlin Wall fell: the dangers of the Euro, the psychological side effects of the west’s triumphalism and the price we had to pay for pushing towards expansion not deepening Europe. Up to 1989 the EU had consisted of only 9-10 states and they shared a progressive project towards greater democracy and social values – not just individual goals. After 1989 this project was defeated and is now in disarray.”

“We’ve paid the price today for the defeat of the European project after 1989. See what happens when you let the genie out of the bottle!”

*Quotes from Geert Mak in conversation with Rosie Goldsmith during the ‘Great Europeans’ series at Kings Place, London, and at the ‘SILK Festival’ in Skudenshaven, Norway.