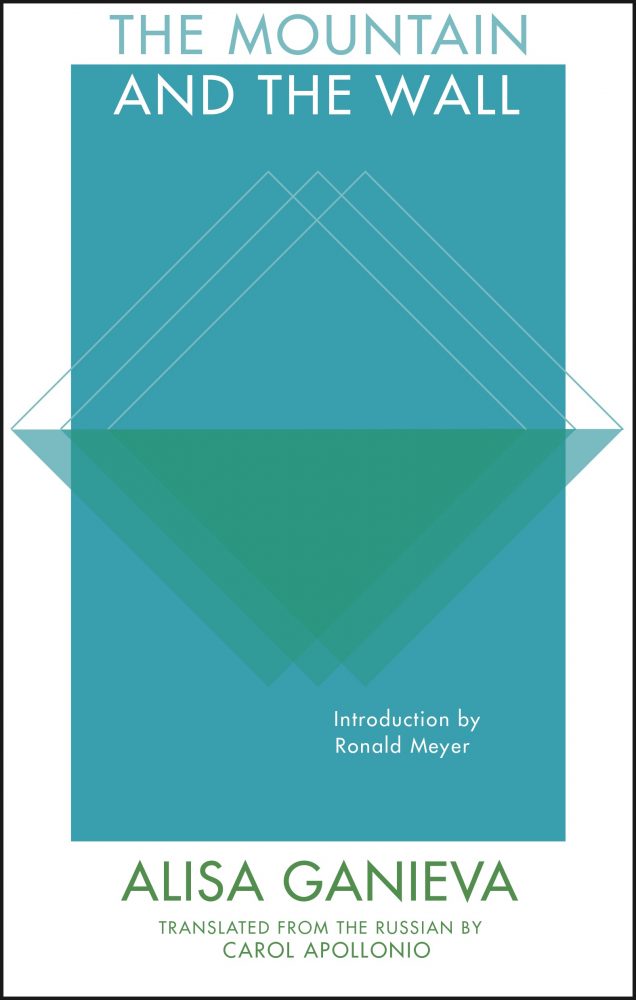 From THE MOUNTAIN AND THE WALL by Alisa Ganieva, translated by Carol Apollonio

A rumour spreads through Dagestan’s capital city, Makhachkala: the Russian government is building a wall to close off its Caucasus republics from the rest of the country. Ethnic and religious tensions mount – no one is spared the consequences. But like a vision in the midst of this nightmare, the image of a “Mountain of  Celebrations” appears, a refuge for all those who are tired of the intolerance and violence.

This remarkable debut novel by a unique young Russian voice portrays the influence of political intolerance and religious violence in the lives of people forced to choose between evils. The Mountain and the Wall focuses on Shamil, a young local reporter in Makhachkala, and his reactions, or lack thereof, to rumours that the Russian government is building a wall to cut off the Muslim provinces of the Caucasus from the rest of Russia. As unrest spreads and the tension builds, Shamil’s life is turned upside down, and he can no longer afford to ignore the violence surrounding him. With a fine sense for mounting catastrophe, Ganieva tells the story of the decline of a society torn apart by its inherent extremes.

Seeing a group of men and women on the square holding big posters with photographs on them, Shamil thought, “Not again,” and decided not to stick around. But something held him back; this was different from the usual demonstrations. There were more posters than before, and the people holding them seemed more aggressive. An unruly crowd had gathered around the poster-bearers, everyone was nodding, waving their hands, yelling. The women, practically all of them veiled, were holding photographs of naively smiling young men and shouting: “Bring back our brother!” or “Bring back our son!” There wasn’t a single policeman in sight, which was especially strange.

A man in a warm-up jacket, gesticulating, was talking into several video cameras: “My cousin’s name was Nazhib Isaev. He was killed in March of this year, right in front of my eyes. We were walking down Lenin Street toward the computer centre, and suddenly this blue sedan with tinted windows pulls up next to us. Some guys in ordinary sweat suits get out and head our way, and as they’re walking they pull on masks and just start shooting, basically.”

“What were they shooting at?”

“Straight at us! So Nazhib jumps one way, and I jump the other. And he just falls over, basically. And with me right there watching, they shoot Nazhib in the head, to finish him off. And then they toss something down next to him …”

“An automatic rifle, this and that, ‘evidence’ to make him look guilty. Then they went into the store there, got a bag, came back, collected the empty shells in it, and took off … and that was it.”

Shamil walked on. In another group a man in a light linen jacket was giving a speech:

“Murad was abducted this past winter when he was on his way home from the gym. They dragged him into a car and took him who knows where. They were wearing Special Forces uniforms. His parents have been trying to get him back for over six months …”

As Shamil listened to the scraps of stories and the coughs of the onlookers, a strange sense of boredom came over him, and yet wouldn’t let him leave. He walked between the groups, looking into the flushed faces of the yelling women, at the high chain-link fence in front of the moribund government building, at his own polished shoes, at the empty faces on all the posters.

Then he noticed Velikhanov, his former colleague from the committee and an old friend of the family, a tall man with greying temples. Velikhanov was explaining something insistently to a few old men in short straw hats who looked a lot like the ones Shamil had encountered in the seaside park after the Kumyk demonstration.

“Hey, Shamil, I’ve just been going over everything for these guys. Look what’s happening over here!” drawled Velikhanov, shaking Shamil’s hand. “I’ve always said that we need to take more advantage of young people. Remember that rally we organised in Mashuk? Vakh, so many people, it was great! We sang the national anthem, organised competitions, Tutkin himself came! This here is nothing, by comparison.”

“Shamil! It’s a total breakdown in logic! And all because they wouldn’t let Alikhan and me organize any educational activities back when the time was right. And we already had this plan to invite guys here from other regions, to take them up into the mountains, to the reservoirs and watefalls, to show them our trades, our traditional arts, our circuses, carpets …” Velikhanov lost his train of thought. “What else? Shamil?”

Shamil smiled. “Yes, sure, we could’ve taken them up there …”

“But no! All of those so-called journalists! Look at them over there, circling like vultures with their cameras. Just getting in the way! A handful of hired stooges show up –” He nodded toward the random groups of shouting people. “– and they’re already putting it on TV:

‘People are being kidnapped and murdered here, right on the streets! People are being murdered right in front of our eyes!’ The press can’t find anything better to cover! Let them come to my village, I’ll show them what they should be putting on TV. There’s a guy in my village who makes inlaid furniture with his own hands. Or look, they can film my mother, see how she spends her days. Why is it that they’re only interested in slobbering over filthy stories like this?”

“Who is it that’s walling us off, anyway?” asked one of the old men. “Who’s destroying the country?”

“So called ‘journalists,’ like them!” Velikhanov shot back angrily, jabbing his index finger into the stuffy air. “The crooks!”

Shamil turned away for a moment and caught sight of Madina’s beige hijab. She was standing half turned away from him, as though taking refuge among the shoulders of her new girlfriends. Some bearded guy was standing to her right and shouting.

“What’s he yelling about?” asked Shamil.

“Why waste your time with them?” snorted Velikhanov. “They’re all suffering and oppressed, they’re being dragged around various dark cellars by the police, they’re not being allowed to pray, they’re being maimed by hot irons, their chests are being branded with crosses, their beards are being plucked out with tweezers, you name it!”

The bearded man was indeed yelling something to that effect, but all Shamil could make out were fragments: “Alhamdulillah, praise be to Allah, the infidels have retreated … The cowardly murtads … without a functioning government … freedom of the Caucasian Emirate … everyone opposed to filth, injustice, money-grubbing, everyone … Allahu akbar … soon those in hiding will no longer have to hide – now, inshallah, people will no longer be persecuted for their religion …”

Carol Apollonio is a Professor of the Practice of Russian at Duke University, USA. She is both an accomplished translator and academic, specialising in the works of Fyodor Dostoevsky and Chekhov and the problems of translation.

Read Rosie Goldsmith’s recommendation of The Mountain and the Wall.