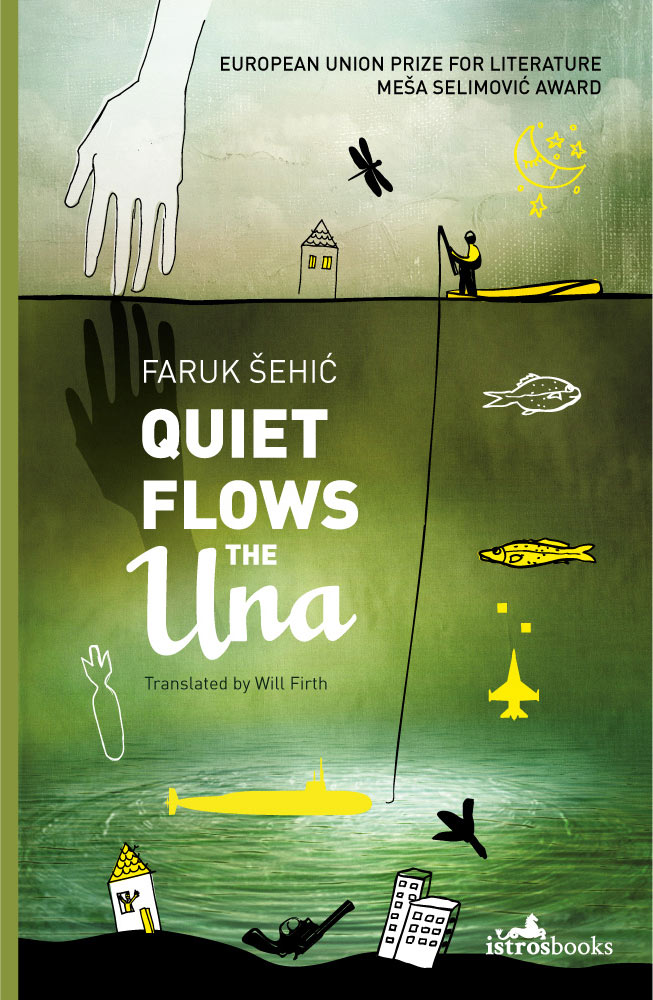 The Monster from the Juice Warehouse

It was so long ago and I was so small that I find it hard to believe that it all really happened. I learned to walk and talk early and plunged straight into the whirlpool of life. Awake for hours before daybreak, I had to wait for the mechanism that ran the town’s life to start ticking – and then I would rush outside. One morning when I was sliding between puddles, I slipped and fell face-down on the title-page of a wet newspaper clinging to the asphalt, where it said that Salvador All… had been killed (my hand had erased part of the surname). Allende was dead, and I was wounded. I kept running with the open wound on my knee and gripping the wad of newspaper in my hand. The day was a merry labyrinth that I wanted to get lost in, as in someone else’s memory.

Maybe it was exactly the day when I crumpled up dead Salvador Allende that the Monster from the Juice Warehouse answered my persistent questions about how she could stand the loneliness of the icy caves. She gave a short monologue with a few allusions to silence, the cold and loneliness. I don’t remember everything, but some of her words have stuck in my mind because I felt sorry for the Monster.

‘I’d say silence is that feeling. Gar-gar-gargel. Silence floods over the hills where the green banners of the trees and the grass wave in honour of the watery power that nourish them. I don’t see them, except at night when they don’t show their colours because I dare not leave this shelter during the day. The silence isn’t disturbed by the swarms of insects and birds but is enhanced by the holy melodies and rhythms coming from the very heart of existence: the fabric of the Earth or the astral spores – the meteorites that sowed the bacteria of life. Gar-gargel.’

Monster made these guttural sounds because her Eve’s apple trembled uncontrollably on her thin neck, which held up a huge, melancholic head. I’d like to say her head was ‘adorned’ by unusually large eyes, but that would be dishonest. Creatures with eyes like that can never be completely happy. Whoever sees the world through such enormous eyes must have tears the size of Maybeetles. Just think how excited Monster must have been when a boy like me came by, and I was the only person she had to talk to. I stole adult books from the library and fed them to the insatiable Monster. You can imagine all the nuances of solitude that the well-read Monster from the Juice Warehouse reflected on as she sat in the cavern cut by human hands from the living rock, and upon which a medieval fort stood. And she had the even worse fate of being the last of her race.

‘Gar-gar-gargel. Silence is easiest to catch over the surface of the water, and then it appears as a pale haze of river vapours rising elegantly like the spirit of a lady – a sovereign of aromas, elegance and tarot, with cards of tufa and sand. She is the Lady of the Water, who rules the water sprites and whose chill spirit brings evening calm to the houses by the river when twilight steals out of its heavenly chest full of worldly wonders. Gar-gar-gargel.

‘Solitude can also be clad in cold, remember. Only that gentle cold has the strength to carry you away to the incredible dimensions and expanses impulsively produced by people’s imaginations, imitating the power of creation we’ve discovered in religious cosmogony. Cold worlds, distant and untouchable, which everyone’s soul longs for, exist in every water molecule, hanging in profusion like the cells of a honeycomb. Solitude is the possessor of the unique and varied atmosphere we get at the setting of the sun, and it resides in many words: gloaming, twilight, dusk, darkness, night, daybreak, black and blue-tinged morn, rosy-fingered dawn, eclipse, blackness… Gar-gargel.’

‘Borges mentions two kinds of semi-darkness: pigeon-blue, that of morning, and raven-black, that of night. Solitude finds its garb in all of them, sometimes heavy like the cloak of a martyr, other times as gossamer-fine as the silk wedding veil that hides the beaming face of a mermaid, who will only vacillate between woman and fish for a few moments longer. Solitude is thus the strongest shield of sufferers and saints. They reproduce through it, confirming the purpose of their earthly existence. Life itself began because of the solitude of ‘the one’ infinite being. But what if solitude itself is that infinite being, whom the various religions have persistently tried to name and appropriate for themselves and their followers? Or what if it’s expressed in the billions of feelers of eternity implanted in our bodies and those of fishes? One way or another, it’s hard to make oneself clear to others and vice versa. That is solitude – an impenetrable protective suit of sorrow… Gar-gargel.’

While Monster was speaking, I had a visual notion of every word she said – my photographic memory registered every letter she spoke. I didn’t understand the meaning of most of the words. I imagined solitude as a stalactite with cave water eternally dripping from it.

I drank my bottle of juice to the last drop and said goodbye to Monster with our old greeting: ‘While there’s juice, there’s hope!’ We knocked our foreheads together, and with thumb and middle finger we flicked the bungs into the darkness, where the Una flowed. Monster went back into the depths of the nuclear shelter, rushing for her bedchamber through tunnels where, four hundred years ago, the hunchbacks used to hide from people. I closed the steel door stealthily and silently so it wouldn’t screech, then I dragged a willow branch behind me as I went to erase my footprints in the sand. I climbed the steep slope below the thick walls of the Old Town and walked in a zigzag over the grass to cover my tracks.

The town burned with electric luminance and the hopes and good wishes of its inhabitants. I went down to the asphalt road below the Catholic church and hurried to the old town fountain to wash the green palms of my hands. It was late in the evening and I joined the flocks of people out strolling. I already knew very well how to keep a secret.
PS

Monster, an envoy of the water and the aquatic world, according to her own tale, came into being because the powers in the sand of the Una sensed an influx of misfortune from the human world that threatened to spill over into the aquatic world. The demiurges of the sand united, and their combined strength gave rise to a powerful aura that emerged from the water, from which then strode forth an awkward and wistful human-like creature. Her task is to observe people and their way of life, to get close to them by reading their books, and in the moments before her death to convey that knowledge to her father-mothers, the demiurges of sand, who have ever been wardens of the river and its world. Thus the sand knows the history of the human race better than humans themselves. How can Monster prevent that onslaught of human misfortune, I hear you say? Very easily: by absorbing it into herself and then expelling it from both worlds through solitude. That’s why she has such big eyes. And that’s why her lifespan is very long because the elimination of human misfortune requires a lot of human time, and solitude. But since that misfortune accumulates at such a rate that nothing can stop it, the powers in the sand decided to stop probing the human mind. That’s why my monster is the last of her sort.

I first met her long ago when I used to pass the storehouse for fruit juice, a cavern hollowed out of the bank of the river island where the Old Town once stood. Formerly people used it for storing ice, which was brought from the caves of the Grmeč range and then delivered from here to the various taverns and kitchens. The juice warehouse was, of course, a place for storing juices of all colours and kinds. Rows of plastic crates stretched as far as the eye could see, and the moderate damp and cold made it ideal. Strange noises always came from the juice warehouse, as if the bottles were murmuring and squeaking, bobbing and bumping against each other. When I went in for the first time, attracted by this music, Monster was standing behind the massive, half-rotten door. I was so small that I could squeeze in by pushing apart two loose slats of the high door. So began our friendship, which ended when I went to do my military service because Monster could only be friends with children. When I grew up, Monster disappeared, along with so many other things.

Thank you to Istros Books for allowing us to publish this excerpt of Quiet Flows the Una. The book launches next week in London.