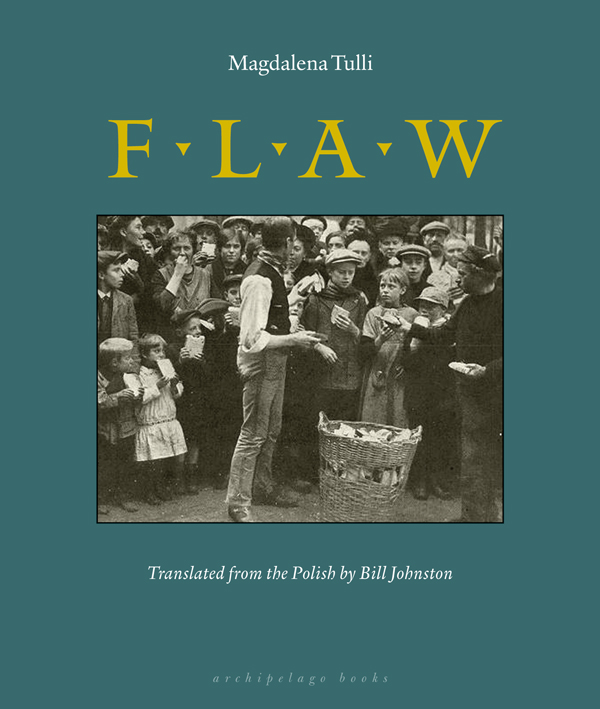 From FLAW by Magdalena Tulli translated by Bill Johnston

So it should come as no surprise if they now begin to emerge from the streetcar at the stop in front of the local government offices. First just a handful of them – let’s say one family, like a sign that is a prelude to the arrival of crowds. Someone has to take the first step, and this first step is from a later perspective nothing more than the presage of an already familiar continuation. Thus, the streetcar comes to a halt and the first refugees appear on the square: a small group of dark figures of different ages, in thick winter overcoats, caps with earflaps, head scarves, mufflers, and thick gloves. They tread unsurely, disoriented by the sudden downturn in their fortunes. The question of whether they may have come at the wrong time is the last thing they would wish to ask themselves. They too were not asked whether an explosion would be convenient for them. They hand down suitcases and bundles and arrange them on the sidewalk as if they believed – without so much as a hint of gratitude – that it had now been given over into their possession in return for the home they had lost. The streetcar cannot move on till they have finished unloading their belongings – till with the help of their children they have dragged out all the cardboard boxes tied with string, the sled, the teddy bear, the gramophone with its huge trumpet, and the canary in a cage. While they’re maneuvering all these objects, they have something to do, and while there is something to do, there’s also hope. Afterwards things will only get worse.

The moment the streetcar pulls away, they’ll begin to look around helplessly, not knowing what to do with their luggage or themselves. They’ll check whether they have brought the tureen with the gold band, a memento of the large service of best porcelain that they could not fit in their cases. They’ll have a slight quarrel, allowing their raised voices to drift all the way up to the windows of the apartments. Then they’ll press their ears to the trunks to check which one contains the ticking dining room clock. But ticking is nowhere to be heard, so they have to open the trunks and make sure that the clock is safely where they packed it, wrapped in a blanket. If it hadn’t been for the haste imposed by unexpected events, they could have taken whole sets of tumblers and wine glasses, and they would have had time to wrap each individual one in tissue and pack it in sawdust. Yet if it hadn’t been for those events beyond their control, why would they have left home in the first place? The youngest little girl is hugging a small pillow. It is her entire luggage. She stumbles as she carries her unwieldy burden, but she won’t hear any word of encouragement, because the grown-ups gave forgotten about the job they gave her. She’s despondent and wants to return home. She was always the apple of their eye; so why is it that right now they don’t hear her moaning and whimpering? She might be forgiven for thinking they have wads of invisible cotton wool stuck in their ears. When she stamps her little foot on the sidewalk, their gaze passes over her oblivious, wrapped in a mist of more important affairs. The pillow could just as well be lying on the curb, and that’s where it falls. The little girl grabs at sleeves and coattails, to no avail. Since her desperation remains without a response, she begins to understand that there is no return to what was before, and that all her privileges are gone. She sits down on her pillow, her eyes wide open in astonishment. The tears that proved useless dry on her cheeks.

But the two older children still suspect nothing. […] Gleefully disobedient, for their own amusement they start running away from their mother and making faces from a distance at their father, who is walking round the square and, straining to be as polite as possible, which is understandable in this situation, is asking about a place to rent. […]

There is nothing to rent, nor could there be; each concierge sends the father on to the next building without so much as batting an eyelid. If only because of the cap with the earflaps and the thick winter coat, which smells of mothballs, drawing attention to itself and arousing mistrust. Otherness is always conspicuous from a distance, though it’s hard to say how one recognizes it, if not from certain elusive attributes of cut and fabric. And what on earth kind of cut is that, what on earth sort of cloth is it, how can anyone wear something like that? – such questions automatically present themselves to the concierges, and especially to their wives. As for the upper windows overlooking the street, not many details can be seen from up there, but even so the first thing that will be noticed by the concerned occupants will be the foreignness of the handful of overcoats, incongruous as dark inkblots against the clean sidewalk, with its pattern of paving stones like squared office paper. Concerning the matter of foreignness, then, the locals need only a single glance, accustomed as they are to recognizing it in all its shades. There is no need for the mind to exert itself, and it’s hard to be mistaken. The newcomers’ attire does not blend subtly into the background; on the contrary, it is strikingly dark, and stands out in sharp contours displeasing to the eye. It can immediately be seen that they do not belong to this story. Foreignness, isolated within itself, is incapable of explaining itself, despite having introduced into the landscape a stain so disturbing it borders on deliberate provocation. Foreignness is foreign, and that is what constitutes its essence.

Translated from the Polish by Bill Johnston

Magdalena Tulli will talk to Marta Dziurosz during our next *Euro Stars* event on 23 November at Waterstones Piccadilly. Other guests include Julia Fiedorczuk and Deborah Levy.