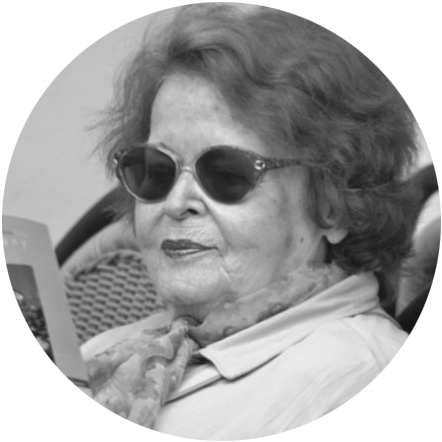 In this, her memoir, Valentīna Freimane talks about pre-war Paris and Berlin, about legendary film stars she has seen close up, and about regular trips as a teenager from Riga to Berlin and back. The author describes the high-finance bourgeoisie and artists’ milieu of Paris and Berlin; the Riga Jewish, Baltic-German and Belarusian circles and their lifestyles, as well as schools in Berlin and Riga. Then she depicts the collapse of all of this during the years 1940–1945, seeking to commemorate those people who, endangering their own lives, helped her during the Holocaust in German-occupied Latvia.

I was denied nothing. There were no books I wouldn’t have been allowed to take from the shelves of my grandparents’ wide-ranging library! Age restrictions or other limitations did not exist. Why shouldn’t we let the little girl read everything! She’ll remember whatever she doesn’t yet understand and comprehend it later. My mother inculcated every new governess with this firm ideal (who initially still tried to apply the same restrictions all children were usually harnessed with). Similar rules applied for all areas of knowledge. It would have been unfitting not to have answered my questions as understandably, openly, and above all, logically.

I am grateful to my parents that from my birth on they considered me a being capable of thinking and making judgements. Because I was unfamiliar with any compulsion, moral prescriptions or mental restrictions, it was easy for me to accept that one must consider the feelings and needs of others and follow the rules of civilised interaction, what is called good manners. I thought of the traffic rules and that people cannot randomly speed down the street without causing chaos. Acquiring impeccable manners was like brushing your teeth at night. That was my governess’s responsibility. From my mother, in contrast, I learned to converse with other people in a way that they were not bored and sensed my authentic interest.

Many Riga acquaintances, solid, orderly citizens, were of the opinion that I was unbelievably pampered; the women also judged my mother exactly the same, presumably out of envy. But father adored us and was not capable of denying us anything, although this never concerned material escapades. I only spent my allowance (I could have coaxed a much higher sum from my father) on books, movies, and sweets. I have to admit that I was stubborn and unpredictable as a child and had a tendency to throw temper tantrums, most of  all when I felt people wanted to repress or overly restrict me. When I was still very small I bit the governess on her hand when she tried to force me to do something I didn’t want to do without explaining her order. One time, in a similar situation, I grabbed a couple of eggs and threw them against the kitchen wall. Mother did not give me a lecture, but just said: ‘How ugly and dumb.’ She regarded me with spiteful astonishment as if looking at a mooncalf who didn’t know how it had got there. Her beautiful grey-green eyes had extinguished and had become grey and cold like granite. She shrugged her shoulders, made a face, turned around, and left. Within seconds I understood how dumb, ridiculously, and unbecomingly I had acted – I did not want to become someone like that, at all costs. That was sufficient. From that moment on, I taught myself how I could achieve far more with self-control and an ‘eloquent’ look than other children could by yelling and screaming. Even years later, with differences of opinion about school or other matters, mother was wont to say: ‘We don’t do things like that.’ This ‘we’ pleased me tremendously – I wanted to belong and adopted the rules for my entire life.

Valentīna Freimane was a film and theatre scholar of Jewish origin. Born in Riga in 1922 into a lawyer’s family, she worked in pre-war Germany for the film studio UFA. After 1945 she graduated with a doctorate in art history and worked at the Latvian Academy of Sciences.  Film critic and writer, she died in February 2018.

Bradley Schmidt translates contemporary German prose and poetry by authors including Ulrike Almut Sandig, Bernhard Schlink, Anna Kim and Lutz Seiler. He is currently translating the diaries of Peter Sloterdijk for Semiotext(e). Originally from Kansas, he is based in Leipzig, where he teaches writing and translation classes at Leipzig University.

Žanete Vēvere Pasqualini was born in Riga. She graduated from the Faculty of Foreign Languages, University of Latvia, in 1995, at the same time completing a course in Italian language and culture at the University of Perugia. Žanete is fluent in English, Italian and Russian and also has basic knowledge of French. She worked for the Latvian Embassy in Rome which has led to her now dividing her time between Latvia and Italy. Žanete has translated literature for both adults and children. She enjoys the challenge of rendering the text precisely while keeping the target language as natural and flowing as possible.