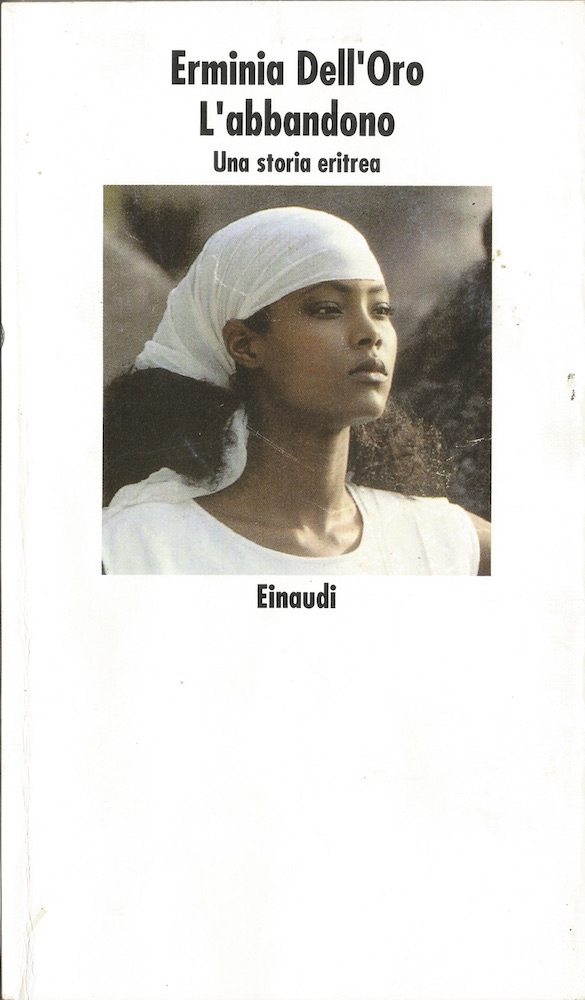 From ABANDONMENT: AN ERITREAN STORY by Erminia Dell’Oro translated by Oonagh Stransky

When the universe lit up all its suns and stars in its infinite spaces, it resonated momentarily with the magic it had created but then understood it was alone and that it always would be. And so it cried. A flight of angels crossed the skies, the light from the multiple suns mottling their wings with color, and disappeared. The universe sighed heavily and relaxed. Its tears crystalized into alternate worlds that keep the dream – or the memory – of the luminous wings alive. Now, when the cosmos recalls its ancient suffering and the trail of colors that caressed it in order to soften its pain, a rainbow appears in the sky.

After the final rains of the year, a bridge of light appeared above Adi Ugri, a village in the Eritrean highlands. Sellass believed it was a message from God: it was time for her to tell her siblings about her desire to leave the village. In the hardscrabble land where Sellass was born, every day was a gamble with life. She didn’t want to raise children there; she had seen too much misery. Her parents were dead and her five sisters and brother survived by working tirelessly with their families on arid patches of land.

Sellass was twelve years old. If she remained in the village she would have to get married and accept a future devoid of hope. When distant cousin Tecle’ returned to Adi Ugri for a few days, he told her about the big body of water that was the sea and the white city called Massawa. Tecle’ had learned a profession in Massawa and said he would only return to the highlands when he was ready to die.

Sellass’ decision was approved by her relatives. After all, she was an adult and they had enough troubles without adding her problems to the mix.

“Never serve the white man,” her oldest sister, Mebrat, told her. “This country belongs to us. We must never serve them.”

Alefesc, a beloved aunt, cautioned her heavily and gave her an amulet to protect her from the evil eye.

“You are too beautiful, Sellass,” she said hugging her tightly. “Be careful that your beauty does not become a disgrace.”

Alefesc could tell stories like no one else, stories that bewitched Sellass. She would call forth the spirits of the air and fill the evening hours with magical figures; she spoke in the voices of the dead, first as an old man, then a child. Sellass would lose herself in these stories.

Once in a while Alefesc herself disappeared. It was as if she became one of the spirits whose story she told, disappearing into the blue canyons of the night sky. The villagers said the demon came down to possess her and that he took her off, screaming, into the dark mountains of night.

Sometimes Sellass would be woken during the night by Alefesc’s screams; she’d cover her ears with her hands and pray that God would frighten away the demons that made Alefesc go crazy.

When it happened, the hyenas ran off and all voices were silent; human terror, madness, took even the shadows’ breath away.

Sellass tied the amulet around her neck, put a sack over her shoulders for her few possessions, said goodbye to everyone, kissed the hand and the hem of the cashi of the village, and began her descent towards the sea. In order not to feel alone on her journey, she daydreamed and sang to herself. God had created a bridge that would carry her far away from her village. She believed she was crossing the sky and that aerial spirits traveled by her side to keep away the fear.

When the sun suddenly went down and the shadows of night appeared, occulting those immense spaces, Sellass felt fear grip her heart like a vise.

She senses the many voices of darkness walk over her clothes and face, each one a breath of terror.

She closed her eyes and called forth the benign spirits of the night, asking them to keep the howling jackals and hyenas at bay. But her heart hurt with fear, so when she saw the cone-shaped roof of a tukul hut in the shadows, she asked the family who lived there to host her until dawn.

The sun had not yet fully risen when she took up her journey again. After a few hours of walking, she saw before her the arid and fiery expanse of the lowlands.

She encountered a caravan of rashaida merchants: veiled women, their silver earrings jangling heavily, bobbed about on the high withers of camels. Their distant haughtiness made them look like creatures of her imagination. One of the merchants asked where she was directed and offered her a passage on one of the camels through the desert. They, too, were going to the sea, he said, but not to Massawa. They were going to another, more distant place.

When Sellass left them and took up her solo journey again, she feared the heat. It made her head spin and her tongue swell. Her long dress was drenched with sweat and her sack weighed heavily on her shoulders. She tried to resist drinking the little water she had left in her water pouch until she knew how far away the sea was.

She came upon a group of men and women who were dragging themselves towards Massawa. The struggle had drained them entirely. Their faces showed utter desperation, their existences were dissolving, they held onto life the way a dying person is kept alive by a glimmer of light. These people were the offspring of a nightmare, conceived by the scorching desert. Sellass knew that if she joined them she would die. Her heart beat faster. She overtook them. It was as if no one had even seen her.

She arrived at Otumlo, a vast expanse of desert just beyond the city limits, as the sun was setting. The hot air was pregnant with an intolerable odor. She saw shapes and figures in front of her that reminded her of the ghost worlds described by her aunt Alefesc.

Sellass had lived with misery her whole life. She knew about hunger, epidemics, fatigue, and death. She had seen young people and children die. Suffering made its home in her village.

But now, almost collapsing from heat, thirst, and fatigue, when she came across these remains of men and women, she felt her heart swell with terrible pain.

They were the sick and infected people of the city and they crawled across the hot sand plains of Otumlo like large dark insects; they were either following a sudden hallucination that beckoned to them from the desert of death or in search of extreme solitude out of a final sense of modesty.

A young woman walked between the shadowy figures and leaned over them, looking for someone. They extended their skeletal arms to her. Sellass approached the woman.

“Where are we?” Sellass asked in a whisper. Her anguish was so intense she had difficulty finding the strength to speak.

“These are the plains of Otumlo,” the woman said. “These people were chased out of Massawa because they are sick. I came here to find a woman with leprosy who is from my village. I promised her I would help. They told me that she had been left here.”

The woman looked at Sellass. “Get away from here. Go.”

Sellass saw a group of children fighting over a donkey’s intestines that were swarming with insects. Vultures screamed and swooped down towards them.

In the distance, she saw a caravan of camels headed towards the sea. The caravansary ignored the desperate cries from the Otumlo plains. Sellass could see the rich vestments of the women and the white turbans of the men.

Behind them, barefoot children carried torches.

Sellass was tempted to run towards them and ask them to carry her away but she had no more strength. In any case, they would have thought she was one of the sick.

An old man with a long, thick, white beard led a lamb to a woman who lay on the ground.

“Your son is dead,” he said to her. “Nurse the lamb and fatten him up. We will feed him to the weak.”

The woman brought the bleating lamb to her breast. On the ground by her side lay a tiny shroud-covered infant. She had woven the cloth in her village and brought it with her on the long journey so that if death had appeared to them, her son would not return to the earth naked.

Sellass felt the burden of the world’s suffering on her shoulders and in her heart. There was nothing beyond that desert of desperation, faces disfigured by hunger, the horrified gaze of people who wouldn’t resign themselves to dying, the lamentation of beings marked by a profoundly humble existence.

She looked at the evening sky, bathed in the last glow of red and gold light. She looked out at the beauty of the desert, that expanse of indifference, and searched for a sign of salvation, something to help her get out of that place.

She thought of the highlands, of Adi Ugri, and she imagined the rainbow. God had not brought her thus far to die. She dried away her tears and drank her last water.

“Is it far to Massawa?” she asked the man with the white beard.

He indicated with his arm. “It’s that way. Walk for a few minutes and you will be able to smell the sea.”

Oonagh Stransky was born in Paris, France and has lived in the United States, Saudi Arabia, Lebanon, the United Kingdom and currently lives in Italy. She has translated a wide range of writers from Pasolini to Pope Francis and also writes essays and short fiction. She hopes to find a publisher for Abandonment: An Eritrean Story as well as other novels by Erminia Dell’Oro. www.oonaghstransky.com
Erminia Dell’Oro was born in Asmara, Eritrea to an Italian family who had settled there in the late 19th century. At age 20 she moved to Milan, where she lives today, while still maintaining a close relationship with Eritrea. She has published 6 novels and 18 books for children, all with major publishers. L’Abbandono: Una Storia Eritrea was published in 1991 by Einaudi.