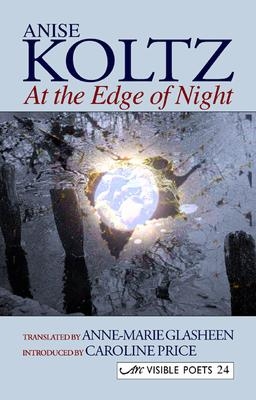 French Book Week: From AT THE EDGE OF NIGHT by Anise Koltz, translated by Anne-Marie Glasheen

On this transparent day

light sits on the stones

If you touch the earth

in this rigid landscape

the rabid language of my heart

You still weigh on me

the wind is out of breath

I know not if it’s in me

that memory is stirred

whence you rise from the dead

to tie me up

with your umbilical cord

The man no longer covers me

The man no longer covers me

will be eaten without me

L’homme ne me couvre plus

L’homme ne me couvre plus

From At the Edge of Night, bilingual English / French edition, introduced by Caroline Price, published by Arc Publications (2009). Part of the Visible Poets series edited by Jean Boase-Beier.

Thank you to Arc Publications for allowing us to publish these poems.

Anise Koltz was born in Luxembourg in 1928. She is first and foremost a poet, but is also a translator and photographer. She has written poetry in German and French, and also children’s books in Luxembourgish. In 1963 she founded and directed the Journées littéraires de Mondorf (Mondorf Literary Days), which brought together writers from all over the world, with the aim of establishing and maintaining links between the Luxembourg and the international literary scene. She continued in this role until 1974. In 1995, the Mondorf Literary Days were revived and it was decided that all genres would be represented, thereby providing a wide range of authors with a platform for their works.

Koltz is a member of the Académie Mallarmé (Paris), Pen-Club Belgium and the Institut Grand-Ducal des Arts et des Lettres (Luxembourg). She is one of the founding members and vice-president of The European Academy of Poetry. Over the years she has collaborated with, and translated, poets, writers and artists to create bibliophilic editions, has had a variety of works dedicated to her and has had poems set to music. Translations of her poetry have appeared in Belgium, Colombia, Germany, Ireland, Italy, Macedonia, Portugal, Romania, Spain and Sweden; she has received many prizes and awards for her poetry.

Anne-Marie Glasheen, poet, photographer and translator, with an English mother and Belgian father, spent her early childhood in Belgium. A past Chair of the Translators Association, Glasheen has translated fiction, non-fiction, plays, poetry and art history books. Her translated plays have been performed at the Edinburgh and Brighton festivals, in London, the USA and Northern Ireland. In 1998, she was the recipient of the Belgian francophone prize for translation.

She co-ordinates cultural exchange programmes and festivals, runs literary projects, gives public readings, lectures and broadcasts, runs workshops and writes articles. Her poetry has been published in poetry journals in Belgium, France, Ireland, Luxembourg, the UK and USA and her first collection appeared with Bradshaw Books in 2008.

As a photographer her work has been widely exhibited in and around London. Her first major show outside the UK was in Cork, Ireland, in October 2008. e past ten years he has lived in North Dorset and currently works as a copy editor.