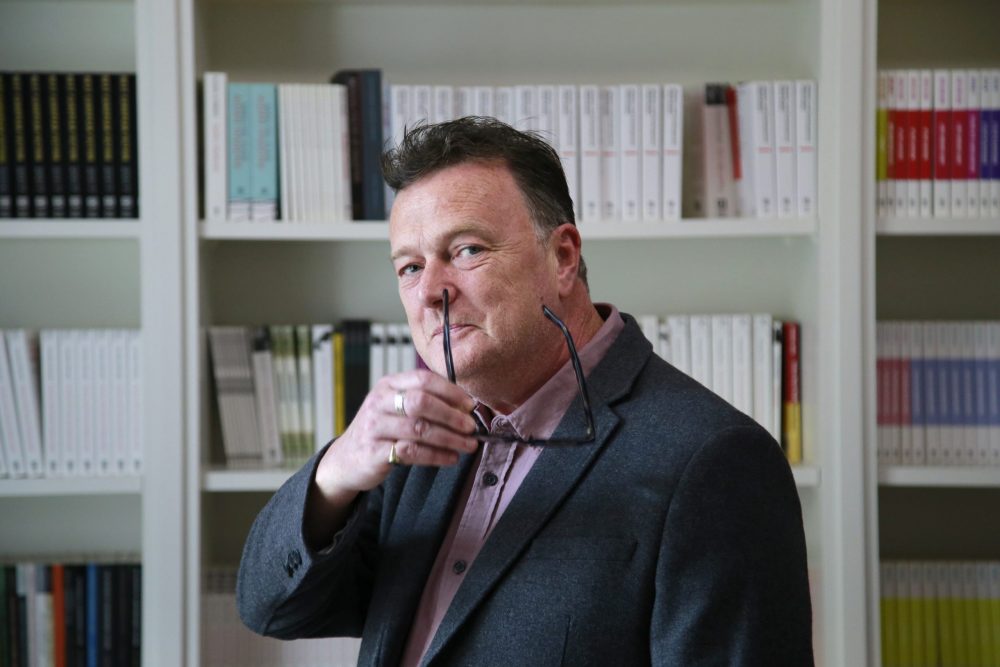 Frank Wynne is a star of French literature – in translation. One of the UK’s top translators into English, he has won several awards and publicly champions literary translation. Frank has translated over fifty novels (from French and Spanish), among them works by Michel Houellebecq, Pierre Lemaitre, Patrick Modiano, Claude Lanzmann and Virginie Despentes. Born in Ireland, he fell in love with languages not at school but when he moved to France and later to Central and South America. He began his professional life as a book seller and began by translating French graphic novels. Rosie Goldsmith asked Frank Wynne about the status of French literature in Britain today and his approach to translating it.

ROSIE GOLDSMITH: Do you ever distinguish between different types of French when you translate? Is Swiss French different?

FRANK WYNNE: There is no such thing as ‘translating from French’. The differences (some subtle, others serious and substantive) between the French written in the cities and the banlieues, in Paris and Bordeaux, or in Mauritius, Côte d’Ivoire, Belgium and Switzerland, are such that any translator is invariably working from various iterations of French into various versions of English. Swiss literature, translated from its various languages, has recently been brought into sharp focus by the successes of Joël Dicker, Noëlle Revaz and Peter Stamm, but it would be nice to see more titles in English by writers like Pascal Mercier and Alex Capus. The language and preoccupations of Swiss literature (or any Francophone literature) are inevitably different from literature from Canada, the Maghreb or West Africa or the hexagone. But to differentiate is not to ascribe value. American, Australian, Irish and British literature – to say nothing of Indian and Pakistani literature written in English – are often very different (just try to imagine a British Cormac McCarthy or an American Muriel Spark), but the difference in language and setting is that of geography and culture, it tells me nothing about the experience of reading the book.

RG: Of the novels you’ve translated were any of them Swiss?

FW: Unfortunately not. Sadly no-one offered me the Joël Dicker or Jacques Chessex, who have been the great successes of recent years – though I would quite literally have hacked off a limb in order to translate Albert Cohen’s masterpiece Belle du Seigneur, which was not translated into English until 1995, having been originally published in French in 1968!

RG: How would you describe the reception and perception of French fiction in the UK today?

FW: The first two books ever published in the English language in the 15th century by William Caxton, who was printer, publisher, translator – were both translations from the French and since that time French has always led the field in works of “world literature” translated into English. So, what does it mean to be “most favoured language”? In arithmetical terms, according to US-based publisher ‘Three Percent’, French accounted for 93 new titles in 2014, almost twice as many as its closest rivals: German (50) and Spanish (46), and more than the combined titles translated from Arabic, Italian, Russian and Chinese. But even 100 new titles is a drop in the ocean considering that about 150,000 titles are published annually in the UK.

RG: Do we in Britain seek out French literature specifically? Over German, Italian, Portuguese or others?

FW: I think that editors and publishers are perhaps more likely to acquire French titles, in part because more of them are likely to be able to read in French than in other languages, but I do not believe that readers seek out Francophone titles over others. I think readers choose books based on reviews and, more especially, on word of mouth – the success of Michel Houellebecq’s Atomised, or Muriel Barbery’s The Elegance of the Hedgehog, was driven by the excitement of readers rather than by a particular fascination with French culture. There are perhaps exceptions to this rule – readers of genre fiction, particularly crime fiction, enjoy the dépaysement of novels set in foreign countries, whether the Sweden of Henning Mankell or the France of Pierre Lemaitre. That said, it is true that the UK has an ongoing fascination with France and its culture, one based as much on rivalry and rancour as on admiration, and as readers we have a clearer sense of French history and its issues than we do of the cultures of Portugal, say, or Brazil, which makes fiction translated from French somewhat more accessible.

RG: Do we still favour the Classics over contemporary French fiction?

FW: Inevitably. There’s that saying “Politicians, old buildings and prostitutes become respectable with age” and translations enjoy the same fate. The great nineteenth century realist novels of Flaubert, Balzac and Victor Hugo are considered as much a part of “our” heritage as those of Dickens and George Eliot. Readers do not think of them as “foreign” or “difficult”. This is partly their status of acknowledged classics (a dubious status conferred by generations of previous readers), but also stems simply from the fact that, despite modernism, structuralism and post-modernism, many readers are still drawn to “realism”, and more still are drawn to the novels set in a past where moral ambiguity feels less threatening – something that can be seen in the British obsession with period dramas and historical novels.

RG: How good is our knowledge of modern French writers?

FW: Poor and patchy. One of the most important and influential literary authors in France in the past thirty years has been Christine Angot, whose intimate, often claustrophobic autofictions have garnered prizes, glowing reviews and spectacular sales, yet none of her books have ever been translated into English. Much the same might be said of commercial fiction: the top-selling authors in France of 2016 were Guillaume Musso and Françoise Bourdin, with home sales ranging between 700,000 to 1.8 million copies. But while Gallic Books made a valiant attempt to publish Musso here some years ago, he remains almost entirely unknown, while Bourdin has never been translated. Even writers of major international stature can slip through the cracks. For twelve years, I tried to persuade various editors to translate and publish Patrick Modiano, whom I considered one of the finest post-war French writers. It took the announcement by the Nobel Academy in 2014 to catapult Modiano from being what one editor once described as a “fine, rather slight, very French” author towards an English-language readership.

RG: Who are the authors who have ‘broken through’ and why?

FW: Authors ‘break through’ for various reasons: Houellebecq’s Atomised sold almost a million copies in the UK because it was controversial, because it challenged the established orthodoxy of the post-war world; Irene Nemirovsky’s Suite Française because it offered a compassionate, clear-sighted account of a troubled time; Maylis de Kerangal’s Mend the Living because it is a harrowing yet deeply compassionate novel of pain and illness; Kamel Daoud’s The Meursault Investigation because it was a timely response to Albert Camus’ L’Etranger. If anyone could know in advance which authors or titles would break through, my job (and that of my various editors) would be much easier.

RG: What specifically are the challenges for publishers in bringing French fiction to UK markets?

FW: The self-fulfilling prophecy that French literature is “difficult”. In fact, French literature is as curious and diverse, as good and bad, as trashy and dazzlingly intelligent as fiction emerging from any culture and any language. There is a second problem, a general feature of contemporary publishing: whereas the publishers of the post-war period (George Weidenfeld, André Deutsch, Victor Gollancz) published foreign authors, gradually building a readership over the course of many books – as any editor would do with an English-language author – many editors of translated fiction publish individual books, abandoning an author if the first novel does not sell well. There are, of course, exceptions, and the recent re-emergence of Small Press publishers like Gallic and Les Fugitives (publishing exclusively from French) or Alma, And Other Stories, Pushkin Press and Peirene Press (who favour literature in translation), is gradually beginning to redress this balance.

RG: How should French books be displayed in British bookshops?

FW: With all the other books! The idea of “world literature” as something distinct from English literature is, to my mind, one of the most invidious in Anglo-American publishing. It reminds me of the equally spurious category, “world music”, which includes Ravi Shankar and Ali Farka Touré but somehow not Beethoven and Bach. Literature is a continuum, an essential intertwining of voices and languages: it is impossible to imagine the evolution of English fiction – or French or Russian – without the availability of translations.

RG: Is the decline of language learning in the UK detrimental to the popularity of French literature?

FW: Yes, to an extent. The decline of language learning means that students are less exposed to other cultures and other streams of literature, which adds to the notion of translated fiction being “difficult”, in the way we think of foreign films as “difficult”. And yet, the huge success of novels like The Dinner (Dutch), Elena Ferrante’s Neapolitan quartet (Italian) and the novels of Pierre Lemaitre (French) clearly show that, if a reader can be persuaded to pick up a novel, they are interested.

RG: Should we promote/discuss different literatures in translation in country-specific ways or as just good books?

FW: Certain novels demand a special country focus, because they draw on a particular historical or cultural period or trait, but most novels should be discussed in terms of plot, character and language, of passion, emotion and catharsis. It would never occur to us to discuss David Peace’s Tokyo Year Zero as a Japanese novel despite its setting, or Captain Corelli’s Mandolin as an Italian/Greek novel despite the characters. The nature of human experience is that it is communicable, the nature of fiction is the possibility of fostering empathy and understanding, and the nature of translation to “carry them across”. To quote George Steiner, “Without translation, we would inhabit parishes bordering on silence.”

This interview was first published in 12 Swiss Books 2017.