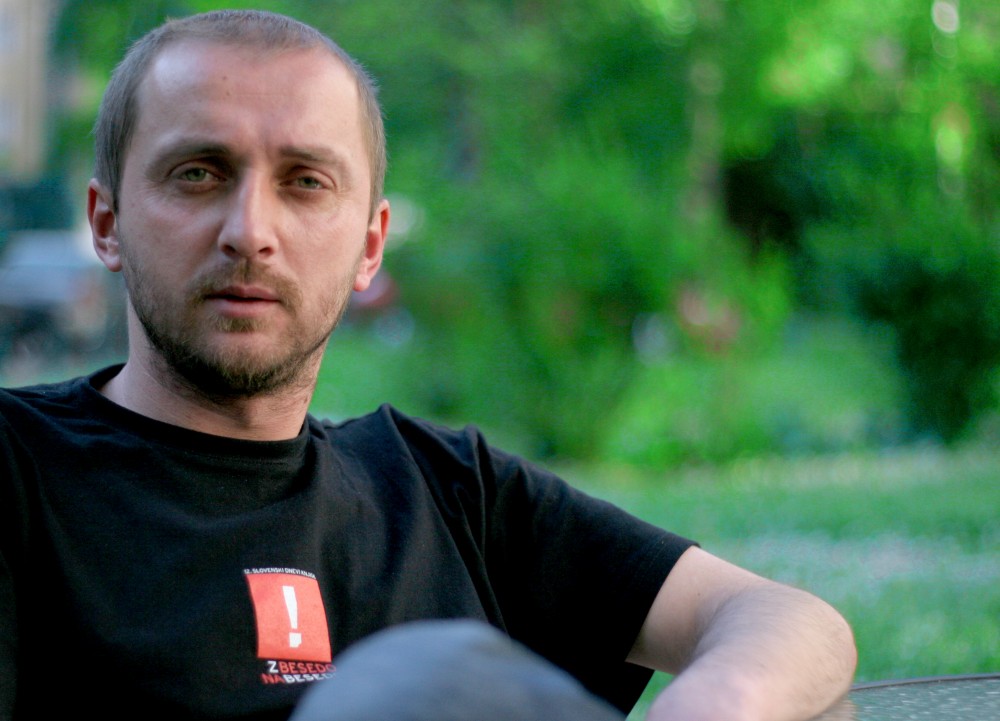 Susan Curtis-Kojakovic: Can you tell me how you came from studying veterinary medicine to writing fiction? Was that a long journey?

Faruk Šehić: When the war started in Bosnia, in April 1992, I decided to leave the Faculty of Veterinary Medicine in Zagreb, because I wanted to defend my home country, which was under attack from Serbia. I wanted to serve in the ranks of the Bosnian army, and so I volunteered. I started as a soldier, then I became an officer, and when the war ended I went back to study veterinary medicine in Sarajevo. However, by that time I had lost interest in the subject. My real wish, even before the war, was to be a writer. I had been a voracious reader since childhood and I wrote during all my years at high school, and all during the war and after the war, so I simply decided to carry on writing. So in a way the war, and its completion, only accelerated my decision to fully dedicate myself to writing. The war simply freed me of all social conventions and the need to build a typical career. I didn’t want to devote my life to civic ideals that have been imposed on me, such as a permanent job, or marriage, and so on. The war made me into a free man, and that is why I have dedicated my life to writing.

You have a collection of short stories, and you have also published poetry collections. What made you want to write a novel?

My first two books were collections of poems, and the collection of short stories was my third work, published under the title Under Pressure. At the beginning of my writing career, I felt the need for a miniaturized form, for small spaces, into which I could place my thoughts, dreams, obsessions. In the poetic form, I carefully followed a severity of expression and style, after which I got the desire to write fiction. I wanted to further describe the war, and it seemed to me that I could only do that by writing prose, and specifically the short story format, which for me were often in the form of fragments, but stuffed full of action, characters, and storyline. This book was a great success with readers and critics, and was read all over the former Yugoslavia. Even with the second book, Hit Depot, which was again poetry, I had managed to reached a wider circle of readers, with the collection becoming an absolute literary bestseller in Bosnia and Herzegovina, which is unusual for a book of poems. Writing a novel came as a logical consequence, because following the book of short stories I had again returned to poetry, and wrote the book Transsarajevo. At the point I started writing Quiet Flows the Una, I was already tired of writing poetry, and wanted a new challenge, that’s why I embarked on a novel.

You have said that when you had the idea for the novel, you wanted only to write about nature and the river Una, and not include any human characters. What made you change your mind?

Well, I would not agree that there are a lot of people in my novel even now, because I did want to avoid including adults in the story. The main characters are old people, children, monsters, and imaginary beings. This reflected my attitude towards the company of adults, and as a consequence my book is antisocial and anarchistic; dealing instead with the world of ideas. Of course, in the end it was impossible to write a book entirely devoid of human beings, although I had that original desire, and the first working titles of Quiet Flows the Una were ‘A Novel about Nature’, then it became the ‘Green Book’, and so on (note: the novel is called ‘Book of the Una’ in the original Bosnian).

What did winning the EU Prize for Literature mean to you?

First and foremost, the EUPL prize enabled the novel to be translated into so many languages, meaning that Quiet Flows the Una will now have new lives in eight languages at least – that’s how many translations there have been until now, or rather will be by the end of this year. When a book is translated, it starts a new life, embarking on a secret journey to new readers. This prize means a great deal to writers from my part of Europe and it represents, like every award, the motivation to achieve greater literary heights.

With regard to my position within the literary scene of Bosnia & Herzegovina, it’s not something I think about, as I see myself more as a post-Yugoslav writer, or an Eastern European writer. I’m interested in broader contexts; interested in readers in other countries, and how will they accept my literature when it is translated into other languages. I am looking forward to the critical reception of my work outside the linguistic area in which I am writing. In actual fact, I do not feel that I belong to any Bosnian-Herzegovinian literary tradition, nor that my influences are linked to a particular writer. In the literal sense, my roots are cosmopolitan.

Faruk Šehić is a veteran of the conflict and an engaging speaker. His work is a poetic, witty and wistful mediation on the beauty of nature and the cruelty of war. Breaking his studies in veterinary medicine in 1992, Faruk Šehić voluntarily joined the army of Bosnia and Herzegovina, in which he led a unit of 130 men as a lieutenant. After the war, he studied literature and, since 1998, has created his own literary works. Literary critics regard him as one of the most gifted young writers in the former Yugoslavia, a shining light of the so-called “mangled generation” of writers whose lives were interrupted by the conflict.

Quiet Flows the Una is the story of a man trying to overcome the personal trauma cause by the war in his country between 1992 and 1995. The novel has won the EU Prize for Literature, as well as the Meša Selimovič Prize for the best novel published in Serbia, Bosnia-Herzegovina, Montenegro & Croatia. The books is published by Istros Books in the UK and launches in London next week. You can read the excerpt of the book here.